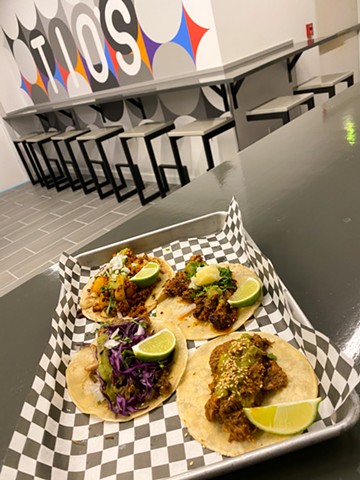 Johnson is a chef who’s worked across the world in locations such as Dubai, Spain, London and Nicaragua, gathering around 20 years of culinary experience. Frey, meanwhile, is an architect who’s worked in Dubai and lived with Johnson.

The two decided to open up the new food concepts in Spokane because they sensed potential in the city, and to take a break from their respective professions. Both locations opened in July.

“We see so much potential in Spokane,” says Frey. “Spokane has the same energy that Portland did in the mid 2000s right before it exploded and became cool and hip. We want to be a part of it before we miss the boat.”

Tio’s Taqueria and Spokanewich share a corner space in the Crescent Court, a second-floor retail area at 707 W. Main Ave., just east of River Park Square. On one end of the corner, Spokanewich offers a lineup of worldly flavors, from a Vietnamese banh mi sandwich to the Central/South American chimichurri or the Middle Eastern falafel, all for just under $10.

“The sandwiches are like a trek around the world,” says Johnson. “We want to do all of this out of a place where nothing you buy is going to cost $20.”

On the other end of the corner, Tio’s Taqueria presents an assortment of street tacos ($4-$5 each) and pozole soup ($7), commonly featuring the flavors of onion, cilantro, lime and salsa verde. Both Tio’s and Spokanewich have concise menus for a quick-service format.

While COVID-19 has shaken business up plans for Johnson and Frey, they’ve still had plenty of repeat business to pay the bills. Frey was also able to apply his architecture background to circumvent costs of hiring a designer to build out the space.

“COVID hit when we had our budget set, three weeks from opening. We were so unsure about the future that we couldn’t spend money on everything,” Frey said. “So, we did all the countertops, stools [and] design for ourselves.”

Johnson and Frey hope their new two-man operation is a welcome service for anyone passing through Crescent Court on their way to shopping or work.