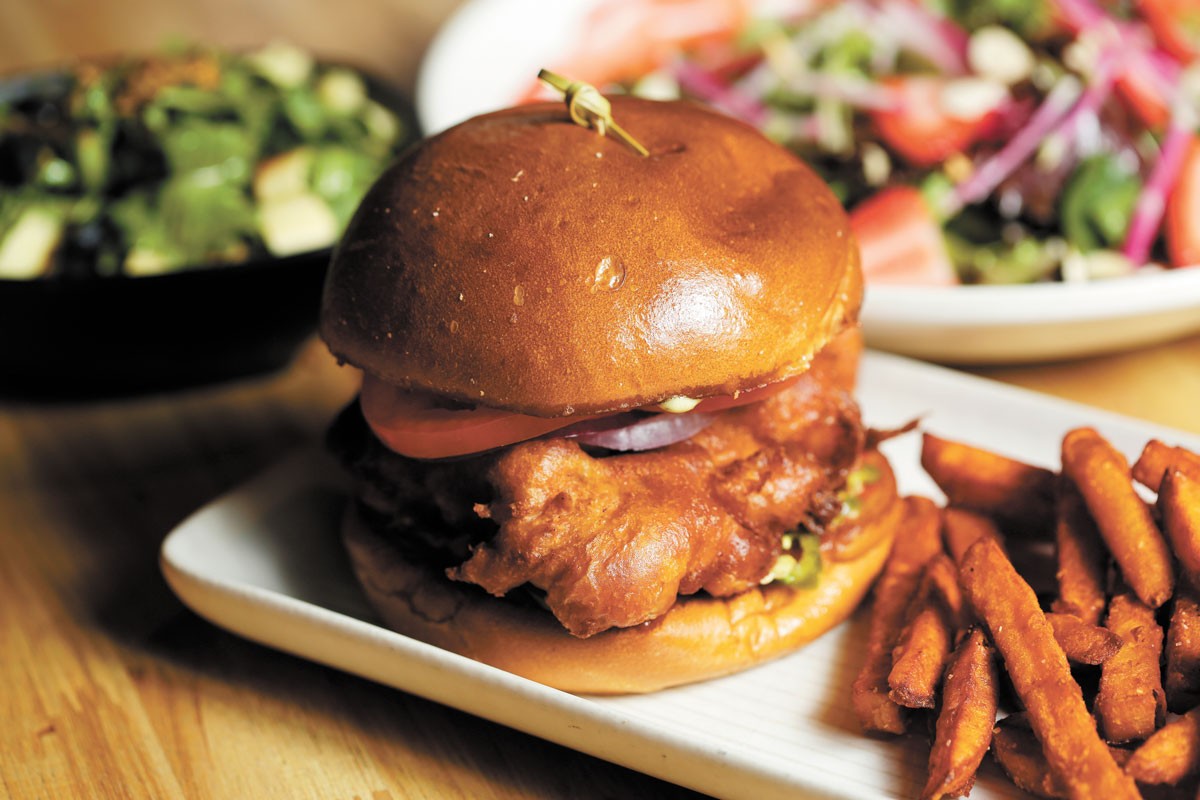 Young Kwak photo
The waffle chicken sandwich, shown here with a side of sweet potato fries, is an early favorite at Bark, A Rescue Pub.

Whether you go for the food and stay for the furry friends, or swing by for a kitten snuggle and linger for a snack, a visit to the newly opened Bark, A Rescue Pub on the north edge of downtown Spokane is bound to be a memorable outing.

The pub-plus-animal-adoption-center, a partnership with the Spokane Humane Society, opened its doors earlier this month, offering burgers, brews and a chance to interact with adoptable cats and dogs from the longtime animal shelter.

The restaurant is located in the historic Broadview Dairy building, most recently home of the Blackbird restaurant, with animal friends housed in a connected space beyond the dining room and bar. Co-owner Josh Wade, who opened Bark with his fiance Katie Holmes, says eight dogs and 14 cats were adopted during its first week of operations.

Wade, who also owns Nectar Catering and Events and Nectar Wine and Beer, was first inspired to tackle the project after a chance conversation with a young man he met at a local brewery, and after learning of a similar concept in Tigard, Oregon, called Fido's.

"I was obsessing over the idea and my fiance and I kept thinking about it," he says.

Wade and Holmes didn't hesitate to get started, signing a lease for the space in February and inviting the Spokane Humane Society to join in.

"We really appreciate their mission, and that they are one of the oldest humane societies in the state," Wade says. "Both of our adopted dogs are from them, and it just seemed like a natural partnership."

For Bark's restaurant side Wade hired chef Kayleigh Wytcherley, formerly of Craft & Gather in Spokane Valley. Tasked with crafting a menu of elevated pub food, Wytcherley's creations include several burgers, like the Frickle ($16) topped with fried pickles, and a pizza burger ($15) which is just as it sounds — a beef patty topped with mozzarella, pepperoni, marinara, olives and mushrooms. Or, build your own with the BYOB option that offers choices of patty, bun and toppings.

Wade says a popular pick during Bark's first weeks has been the waffle chicken sandwich ($16), with waffle-battered and fried chicken topped with jalapeno slaw and aioli.

If a burger's not your craving, Bark's opening menu has a handful of traditional entrees including several large salads, grilled salmon ($25), flat iron steak ($24) and braised chicken ($21).

On the appetizer side, the pretzel "bones" ($9) — housemade pretzels twisted into the shape of dog bones — have also started off as a crowd favorite.

The menu also has chicken wings ($10) with a choice of pesto, chipotle blueberry or Carolina barbecue sauce. Other shareable snacks are the "Bark Boards." The fry board ($16) comes with generous portions of each of the restaurant's four potato-based sides — chili-spiced sweet potato fries, housemade chips, herb fries and salt and vinegar tots — with four dipping sauces. There's a veggie board ($19) and a dessert s'mores board, too.

When Bark launches weekend brunch in the coming weeks, Wade says there will also be a waffle board featuring various jams, syrups and sauces.

To wash it all down, Bark features 38 taps of regional beer, wine, cider and seltzer, as well as a curated wine list of glass pours and bottles. 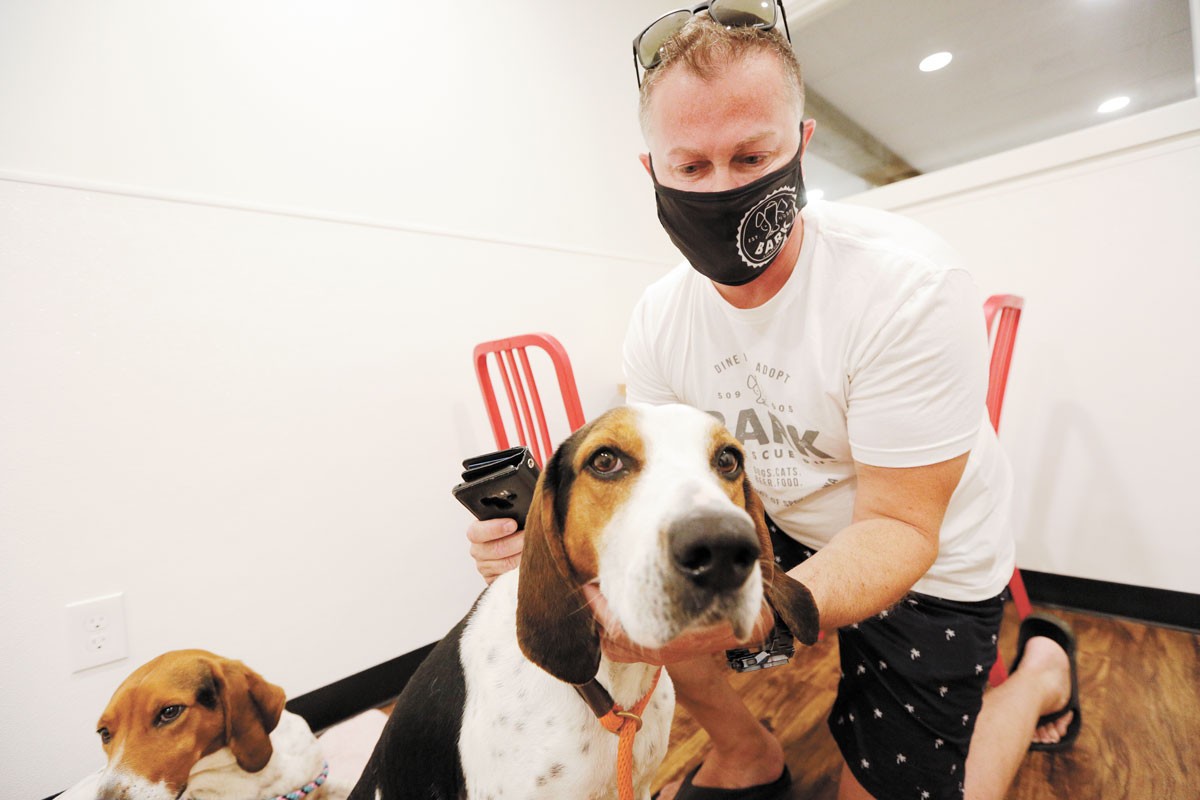 Before planning a visit to Bark, Wade suggests making an online reservation at its website (barkrescuepub.com) both for a seat in the dining room and to visit the animals before or after your meal. There's a $5 cover fee to visit the adoption center for 30 minutes; that fee goes toward wages for a designated team of animal care specialists, with proceeds supporting the Spokane Humane Society.

Other promotional specials at the restaurant also support the shelter's mission, like WAG Wednesday, which stands for "Wednesdays are for giving," Wade says. On that day, a dollar from every drink, appetizer and burger purchased goes directly to the nonprofit.

"Our goal is not just to be an opportunity for more exposure, but we want to be a primary donor as well," he says.

Bark's adoption center is open for walk-ins (space permitting) on Monday and Tuesday, but all other days of the week require a reservation to visit the animals.

Inside the animal's lodgings, there's a communal room for resident cats with a bank of kennels on the back wall to house them overnight. Guests can visit with dogs in another enclosed room next door. On a recent afternoon, 6-year-old sister hound mixes Pond and Domino could be found there, snoozing on cozy dog beds in between visitors. In the cat area next door, a trio of rambunctious tabby kittens darted around while a couple of adult cats sleepily ignored them.

After seeing 22 animals adopted during the first week of operations, Bark is on track to meet Wade's goal of finding homes for 30 animals in its first 30 days. With adoptions already trending higher than normal due to many families opting to adopt a new pet while spending more time at home during the pandemic, Wade says it's already been a bit challenging to quickly rotate in newcomers when space opens up.

"We know people will come here because of the adoption situation, but we want them to come back because of the food and atmosphere and the drinks," he says. ♦