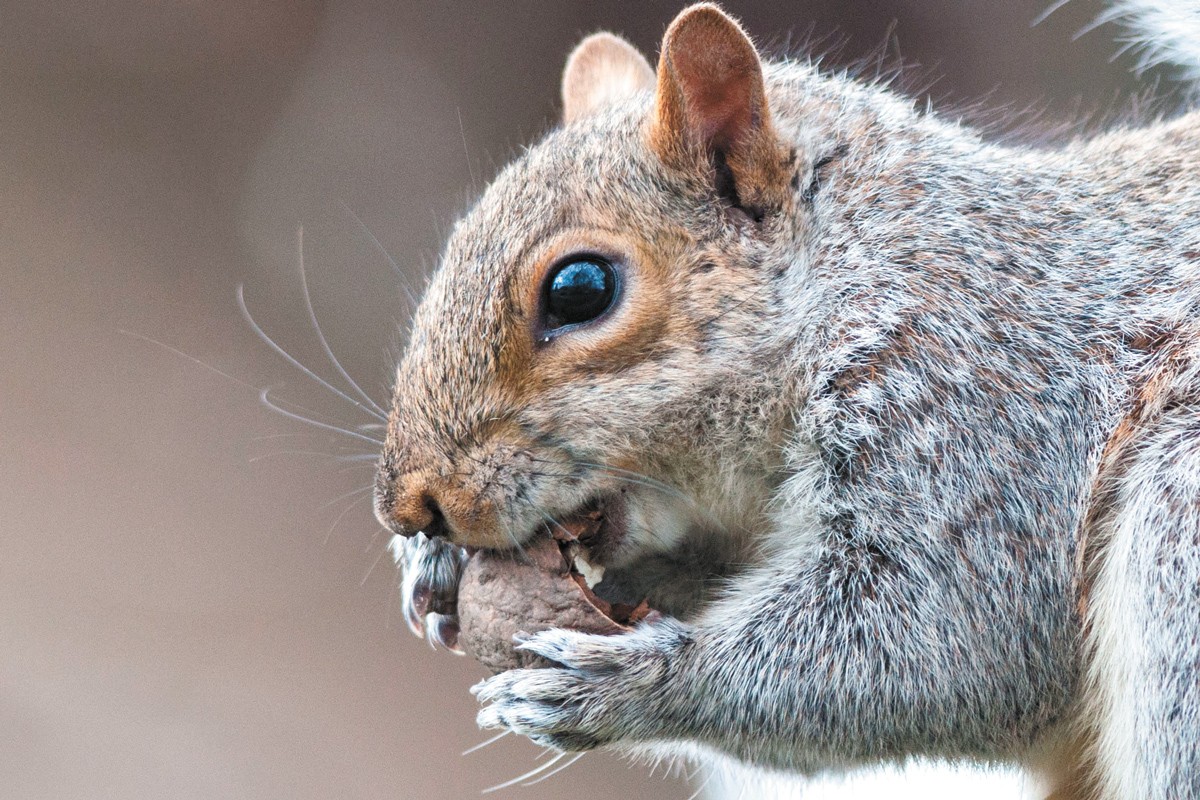 Daniel Walters photo
Love these neighbors, but you probably shouldn't feed them.

Tim Leu, a 56-year-old disabled vet living in the Fountain Terrace apartments on the lower South Hill, says he's frustrated by his downstairs neighbor. But his beef isn't about loud parties or parking spaces — it's about peanuts.

"The lady downstairs has a bad habit of putting unsalted peanuts out on the lawn for the squirrels," Leu says. "The shells, oh my god, the shells are every freaking place."

And maybe that wouldn't be a problem. Except squirrels aren't the only creatures that love to chow down on unsalted peanuts.

Whenever she leaves a pile of peanuts outside, he sees a crew of skunks take advantage of the feast before them.

"I look over the balcony," Leu says. "I see them eating from the pile and I growl like a dog and they disappear."

But sometimes, he says, something startles the skunks.

"What do they do? They love to spray," Leu says. "I didn't start smelling it until she started feeding the damn squirrels."

Yet when he complained to the property manager, he says, he was told there was nothing they could do. It's perfectly legal to feed most animals — squirrels, skunks, raccoons and deer — in the city of Spokane.

But two City Council members, Candace Mumm and Lori Kinnear, are considering changing the law, making it illegal to feed most wild animals in Spokane.

"We should not be interacting at that level with wild animals," Kinnear says. "They're still wild animals." 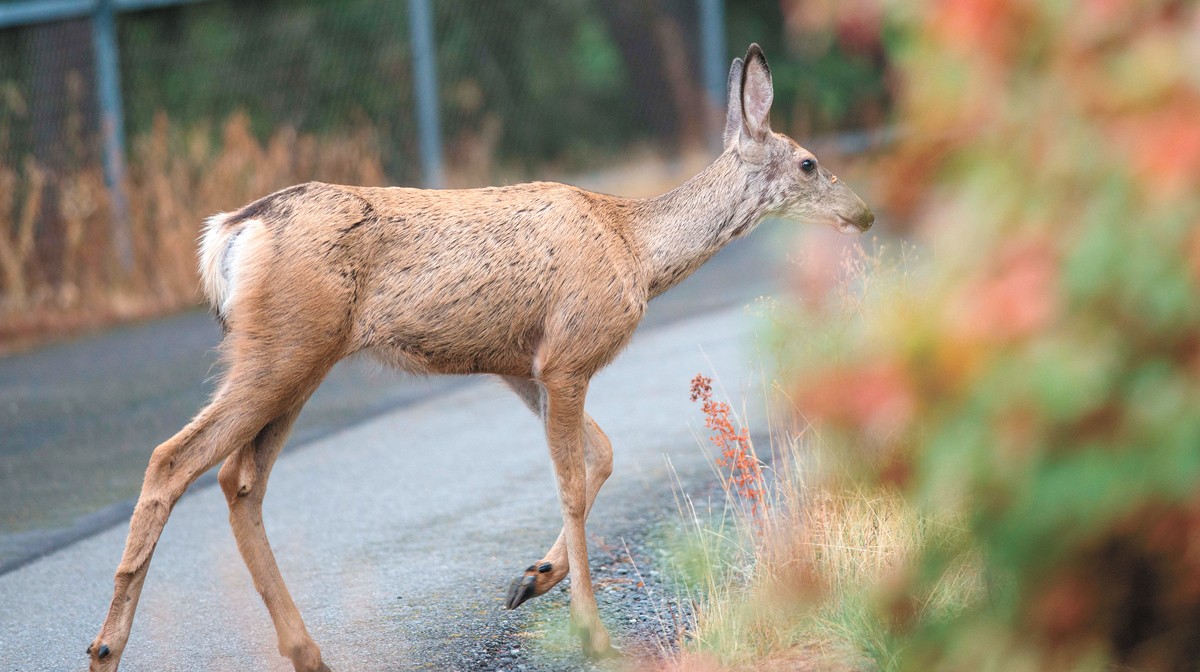 It's already illegal in Washington state to feed large wild carnivores, like bears, wolves or cougars, Mumm points out. And other cities have passed broader ordinances: In 2017, the city of Bellingham passed a law banning the intentional feeding of deer and raccoons.

In 2018, Eugene, Oregon, passed a similar ordinance, banning residents from feeding most wild animals, including deer, rats and wild turkeys.

And Kinnear knows all about the trouble with wild turkeys. Her district includes the South Hill, a region infamous for the turkey hordes that rove the streets and strut through suburban yards, sometimes tearing up lawns and pooping on cars.

She started working with her fellow Councilman Breean Beggs on the issue over a year ago, after they were approached by a man who wanted to talk about what happened to his wife.

But Kinnear says that the Washington Department of Fish and Wildlife told her that they had tried all sorts of tactics to go after turkeys. They'd try to trap them, but people would sabotage the traps. They'd seek out the nests, but the nests were hard to find.

"They said, 'The final problem is that people are feeding the turkeys," Kinnear says.

And not just turkeys.

"I had one gentleman around the Cannon Hill pond who was feeding skunks," Kinnear says. "He had a wild pet skunk."

Councilwoman Mumm says some people aren't even intending to feed the animals. Sometimes they might be leaving their food out without realizing it.

"People will leave their pet food out for cats and dogs, and it will attract other animals as well," Mumm says. "They may not intentionally attract skunks, but they will show up."

Some people feed the wildlife because they just want to see the animals up close. Staci Lehman, a spokeswoman for Fish and Wildlife, says she had one of her own neighbors complaining to her last year about someone in their neighborhood leaving out food to lure wild animals into the range of his game cam.

"I just left a business card saying, 'Hey, give me a call about feeding wildlife,'" Lehman says. "I just wrote a smiley face and signed it."

She says she never heard anything back.

Chris Bachman, wildlife director at the Lands Council, a local environmental nonprofit, says that people generally set out food to attract one set of animals, not knowing they risk inadvertently attracting more dangerous ones

"Anytime you have an abundance of those in the area, they are generally followed by the things that want to eat them," he says.

And so on the South Hill's High Drive bluff, he says, black bears and cougars are sometimes spotted skulking around.

Often, those feeding wildlife are the people who love animals and think they're doing the right thing. In those cases, they can be particularly hard to persuade.

"People who feed wildlife are pretty adamant and it's hard to get them to change their ways," says Kile Westerman, a wildlife conflict specialist with Fish and Wildlife. "They like to have them around and provide a safe haven for them. ... Sometimes they can get entrenched in that mindset even more when a neighbor is adamantly opposed."

In other words, if the guy next door keeps fighting with you over your habit of feeding turkeys, you might double down on turning your backyard into wild turkey paradise.

This dynamic can set the stage for long-running neighborhood feuds, like the one that's been simmering in a neighborhood near the Shadle Park Walmart for over a year: One set of neighbors keeps bringing in skunks, raccoons and deer by setting out a buffet spread for them. Another set of neighbors banded together to hire a certified trapper to capture the animals and relocate them.

One of the neighbors, who demanded that his name not be used because there are a lot of "crazed people who are animal lovers," says they managed to trap 22 skunks and 14 raccoons in one summer.

Fish and Wildlife Sgt. Mike Sprecher has witnessed part of this drama play out personally.

Last year, he was invited out to the neighborhood after complaints that one of the animal-feeding people went onto their neighbor's property and illegally released a trapped wild animal.

"I appreciate the fact that they love wildlife," Sprecher says. "They love them almost too much to be honest. They think they're helping them by doing this. ... In reality, they're putting them more at risk."

Feeding wild animals can make them more susceptible to disease. It can draw them away from their ideal habitats. It can make them act more aggressively towards humans and other animals. And it can result in wild animals darting out more often into traffic.

"It's a public safety risk to people in that neighborhood," he says. "

Sprecher says he talked to the Shadle Park area neighbors who'd been doing the feeding, explaining to them the damage that luring in wildlife with food could do to both the neighborhood and the animals they were trying to help. He hoped they would change their ways.

But a year later, he says, he got called back to speak to one of the same neighbors. A deer in the neighborhood got a small plastic disc, the sort used to secure tarps in suburban backyards, stuck in its hoof. The neighbor was worried about the deer.

Sprecher says that when Fish and Wildlife came out to tranquilize the deer, remove the object, and relocate the creature, they found a bale of what appeared to be alfalfa — set out for deer to feed on during winter — and an assortment of fruits and other foods for critters to snack on laid out on the outdoor table.

"This is probably a direct result of you bringing the deer back into the neighborhood to feed," Sprecher recalls saying about the deer's injury to the neighbor.

Once again, Sprecher says, he asked them not to feed the animals.

When Westerman, the wildlife conflict specialist, met with two City Council members last year to discuss the aggressive turkey problem, he floated the possibility of a more aggressive measure to battle the birds: paintballs.

It's not legal to shoot turkeys with paintballs in the city of Spokane, he says, but it is in Spokane Valley.

"Spokane Valley is OK with us recommending the use of paintballs to harass wildlife," Westerman says. With consistent use, he says, it can be used as a way to deter the birds from certain areas.

Kinnear was horrified by the suggestion.

"I looked at him and said, 'That is not even an option. Don't mention that in public,'" Kinnear says. "You can only imagine the consequences of saying to people, 'Yes, you can paintball the turkeys.'"

She imagines someone missing turkeys and hitting somebody's car or another person. Or hitting the turkey, injuring it, and suddenly they have an injured animal to deal with.

Instead, Kinnear and Mumm are focusing on banning feeding turkeys and other wildlife. They're still in the beginning stages. They haven't figured out any of the other details.

"We could create a long list of animals or maybe we could just exclude a couple," Mumm says.

For now, Kinnear suggests, she would ban the feeding of all wildlife but songbirds.

"People have backyard feeders. That would be ridiculous to say, 'I'm sorry, you can't feed birds birdseed,'" Kinnear says. "That's not going to fly. No pun intended." ♦