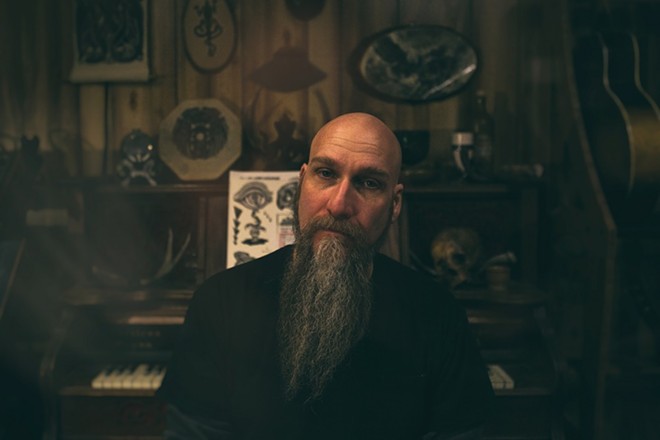 Bobby Cochran
Steve Von Till, poet and musician
Steve Von Till is known for his role in the post-metal band Neurosis. He’s been lending his vocals and guitar to the band since 1989, and has been putting out solo albums since 2000. Von Till has clearly established himself as a musician, but now we get to see if his written words can stand on their own (spoiler: they most certainly can).

Out from Astrophil Press, Harvestman is a collection of poetry and lyrics from the past few decades. He immediately sets an arresting tone with this collection and for me, it felt like walking into a wide, empty fog-filled field on a crisp fall morning. I can’t tell you the last time I had a visceral experience like this from a book of poems. There’s a rustic and earthy feel to the poems while he looks to simplify his life and revert back to nature.

The poems in Harvestman are looking at a man apart. He wants to fit into a world without waste. He showcases this by using our reflection from the greater universe to pinpoint exactly what it means to be human. We are looking at a specific worldview, but it’s not hard to see where we all fit into the ideas he’s delving into.

We have the sea
And we will always have the sky
There, in our own shadow
And in the absolute absence of stars
A darkness depths
Illuminates who we are

To fully inhabit Harvestman, we need to look at the negative space found between the ideas and desires Von Till’s exploring. He’s making a call to return to a more natural state, where we’re one with the world. But it got me thinking, what is it about our current world that makes Von Till want to look back? By writing around these answers, keeping a focus on a singular intention, this collection almost raises more questions than it answers — and creates a high value for the re-read. Each subsequent reading provides a new view in Von Till’s perspective, and I love that. Harvestman isn’t a book you read once and slip onto your shelf — it’s one you read, and absorb, then read again, and absorb some more.

There is a depth of hope, acceptance, and loss that permeates these poems. All at once, I mourn the world that once was and am optimistic for the future, while understanding it’s a tomorrow we’ll likely never see. Like any great piece of art, Harvestman contains multitudes, and that’s exactly what I was hoping for when I cracked it open. Von Till has already established himself as a great musician, and he’s about to put his stake into the ground proving himself to be a damn good writer.

Joseph Haeger is a Spokane-based author and former Inlander intern.