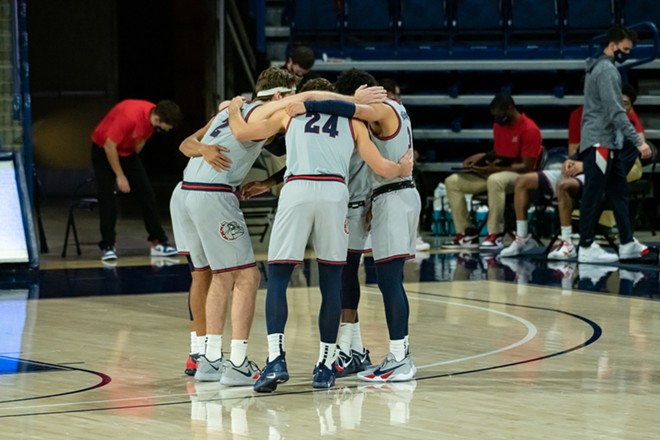 Will the Zags play this week? Only COVID knows.

After a few weeks of relative normalcy, coronavirus has once again reared its ugly head around the West Coast Conference.

Fortunately, at this moment, Gonzaga’s not dealing with the virus directly. But the impact is being felt here in Spokane nonetheless. Three of the league’s 10 teams have paused basketball activities due to positive test results within their programs: Saint Mary’s, San Francisco and Santa Clara. A fourth, Loyola Marymount, may be on a pause as well, though the Lions haven’t come out and said it.

The Lions' most recent game, scheduled for Saturday against San Diego, was called off due to positives within the Loyola Marymount program. For now, though, the Lions are still scheduled to play Gonzaga this Thursday. While the Zags’ Thursday game remains a bit of a question mark, their game scheduled for Saturday is not. Santa Clara won’t be coming to Spokane.

Which raises the question, will the Zags take to the court at all this week? Head coach Mark Few addressed that issue as best he could after the Zags’ 97-75 win over Pepperdine on Saturday.

This isn’t the first time the Zags have found themselves in this situation this season. Gonzaga was scheduled to host Santa Clara on January 7, but Santa Clara was dealing with positive test results at the time and the game was postponed. BYU was supposed to play Pacific that same day, but the Pacific was in the same situation as Santa Clara. So, on Tuesday, January 5, Gonzaga and BYU came to an agreement and decided to play each other on January 7 instead. The two teams only got two days to prepare for a new opponent, but at least they’d get to play.

So, what could happen if Gonzaga’s game against LMU on Thursday can’t go ahead as scheduled? Well, the Zags could play Pacific since the Tigers’ scheduled game against San Francisco has been postponed. But, that’s it. Every other team in the league is either paused or scheduled to play another team that Thursday.

What about Baylor? Fans and pundits have been clamoring for the Zags and Bears to reschedule ever since their December 5 game was postponed due to positives within Gonzaga’s program. As was the case back then, the Zags and Bears are the top teams in the polls and both remain undefeated. It would undeniably be one of the season’s marquee matchups. Unfortunately, the No. 2-ranked Bears are already set to play a marquee game this week, on Tuesday against No. 6 Texas. It would be asking a lot of a team to take on another top team with limited preparation and on little rest.

Saturday’s now-open window, vacated by Santa Clara, offers a bit more flexibility. BYU, Loyola Marymount and Portland are all off that day as well — though again, it’s unclear just what the situation is with COVID protocols in the Loyola Marymount program at the moment.

What makes these situations so tricky is they aren’t happening in a vacuum.

Gonzaga’s game against Santa Clara is one of a handful around the league already postponed this week. Last week saw more games postponed than played in the West Coast Conference. Teams that had previously been on a pause, like San Diego, which has experienced three pauses so far this season, are working their way through crowded schedules as they try to make up past postponements. The Toreros, for example, are scheduled to play six games over the next 11 days.

In a normal season, WCC games are played exclusively on Thursdays and Saturdays. This season the league has played on every day of the week except for Friday in an effort to make up games that had to be postponed. It doesn’t seem like this desperate approach to scheduling will be going away any time soon.