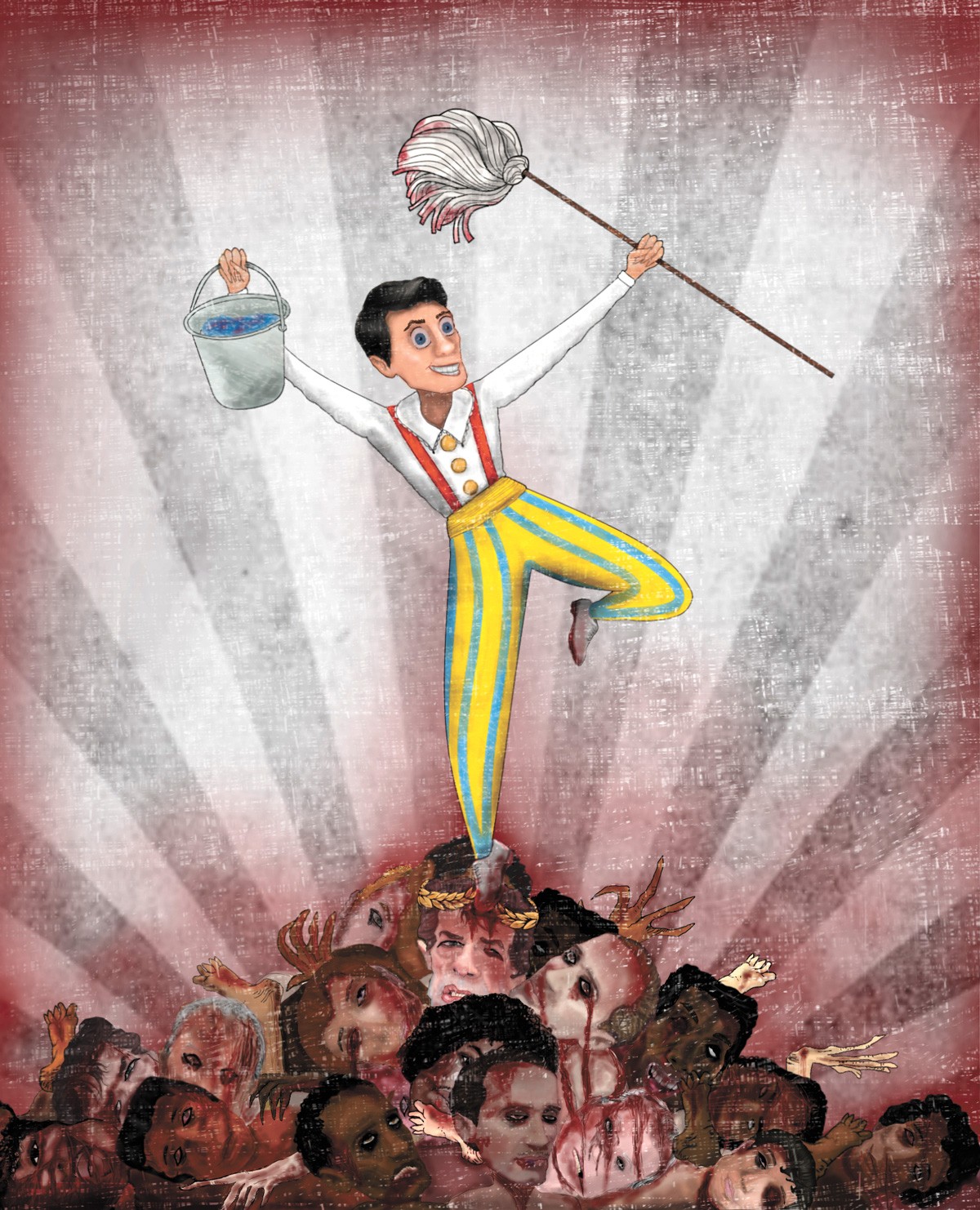 Cleaning up corpses can be fun, in the right hands.

There are countless moving parts that go into producing a musical, so much so that in normal circumstances it seems like a herculean task. Adding in a pandemic, strict health regulations and unreliable internet makes that task a hundred times harder.

That still wasn't enough to stop the theater department at Spokane Falls Community College from putting on their fall show Gary: A Sequel to Titus Andronicus.

"It was a new experience, constantly surviving every turn, which was exciting," says Ashley Demoville, director of the SFCC drama department. "Being in the field of theater for a few decades, it was the first time where everything was completely different. I've made movies and plays, but this was completely new. It had to land between theater and film because we couldn't be in the same physical space."

Even with all of the changes that Demoville and the crew had to adapt to, they were still able to put on a show that was recently recognized by the Kennedy Center American College Theater Festival, where it will be in competition next week.

Demoville chose this particular show by playwright Taylor Mac because she thought it was the perfect, lightly political show that related to life right now and could be done remotely. Gary: A Sequel to Titus Andronicus is set right after the final scene of Shakespeare's Titus Andronicus, one of the Bard's bloodiest tragedies. Gary is a clown promoted to be a maid to clean up the carnage. While being trained to dispose of the bodies, Gary gets distracted and sets his new goal to impress the surviving court with his fooling.

Given that the project was a hybrid of theater and film, there was a lot of improvisation using more unorthodox techniques that depended on what the situation and the technology allowed.

"We filmed the whole thing over Zoom," Demoville says. "The whole cast was in the same Zoom call, and we'd use the Zoom record feature and hide people who weren't supposed to be in the shot."

While recording the video and dialogue was relatively simple over Zoom, it was more difficult when they added musical elements to the show.

"Zoom doesn't allow layered audio," Demoville says. "Even with dialogue there would be an overlapping of lines but that wouldn't work for music."

Three cast members used their phones to record their own audio since they were as powerful as a regular mic would be, not to mention convenient. However, SFCC had to pull together a lot of other equipment to make the show complete.

"We needed lighting, a green screen and cameras," says Meg Jones, who played Gary. "Keeping the lighting the same for everyone in the show to make it look like we are in the same place was very difficult. Plus, recording on Zoom over the internet is not easy to deal with."

According to Jones, the production rehearsed four times a week for three weeks. Each time they had to film, they had to set everything up and readjust to make it look seamless. And while the tech side of things were difficult, the process of acting also changed dramatically in this vacuum.

"The biggest thing was not having the audience and not being able to feed off their energy," Jones says. "You don't know how they engage with things. Everything was basically thrown out the window."

The prerecorded nature of the production was also strange to Jaz Vega, one of Jones' two castmates, but it actually came with strange benefits as well.

"It was very fun, very different from anything I've done before. Really challenging because you couldn't connect to your castmates," says Vega, who played Janice, the maid who trains Gary to clean up the corpses. "There's that unspoken chemistry that was way harder to get over camera, but we still got it, which was surprising but amazing. Working in shows you also never really get to see it, unless you record it. It was really cool to be able to go back and watch it with my family. Weird but cool."

The SFCC drama department is already planning its future productions. Its spring musical will be Madagascar: A Musical Adventure, complete with highly protective singing masks. They are also plan a show for preschoolers titled The Problem of Goblins in mid-March.

"We did not miss a beat with the pandemic," Demoville says. "We continued to do work and used time to explore different means of entertainment and create experiences for people. Students showed a lot of gratitude that we can still meet, and they are still growing their craft in a different way than they are used to." ♦

Gary: A Sequel to Titus Andronicus plays at the Region 7 Kennedy Center American College Theater Festival Feb. 17-20. The event is only open for students and schools. For more information visit kcactf7.org/home/festival/