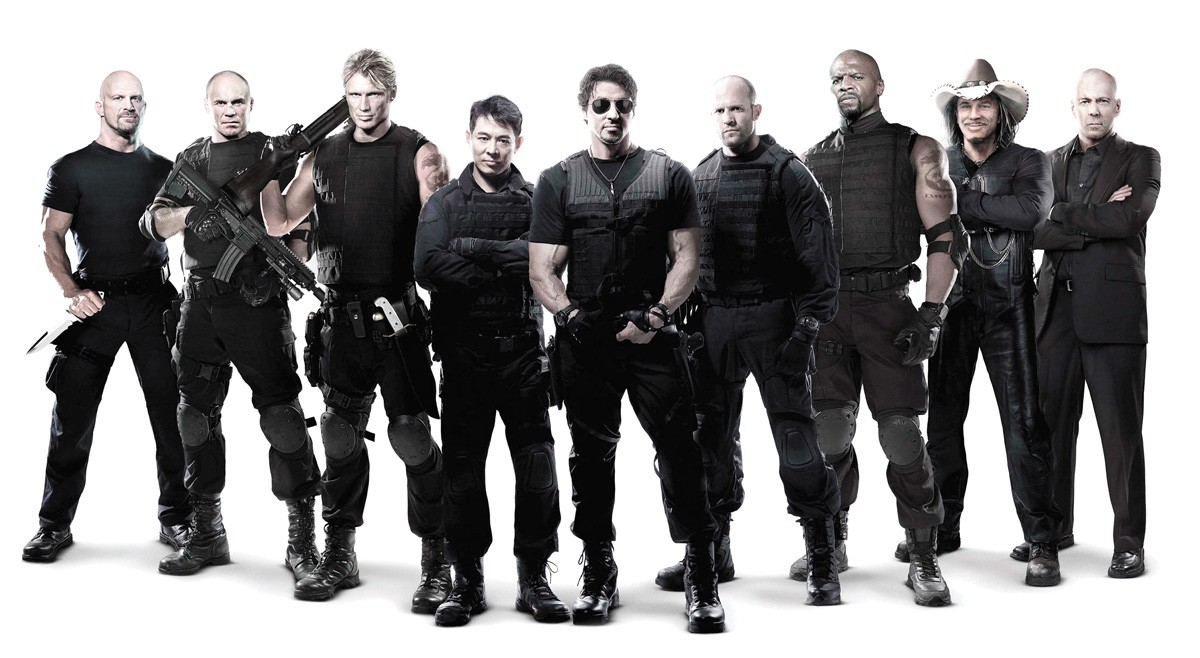 The Expendables take their action with extra cheese.

There was a period during the 1980s when the movie business was utterly dominated by action flicks and dude-heavy audiences that loved them.

Seemingly every weekend saw the arrival of another explosive entry to the filmographies of Sylvester Stallone or Arnold Schwarzenegger or Bruce Willis. If it wasn't one of the A-listers, it was the B-team putting out flicks that passed through theaters quickly but set up shop on cable for years: Chuck Norris, Jean-Claude Van Damme, Charles Bronson. Yes, it was a very pale genre in addition to being male-centric, save for the occasional Eddie Murphy comedy-action entry like 48 Hours.

If you were someone who loved big booms, destructive car chases and ridiculously over-the-top gunplay, it was a great time to be alive. And if you were too young to realize how low-key (or blatantly) racist, sexist and otherwise asinine plot-wise most of the movies were, all the better! It takes a certain baseline of maturity to learn these things, and figure out that dialogue like "Why don't you stick around?" — delivered while impaling an extra to a tree — is not really that funny.

I was a teenager in the '80s and firmly in the demographic ready to eat up however many sequels of Mad Max or The Terminator the Hollywood powers wanted to serve up. By the end of the decade, though, I was heading to college, and my tastes were shifting toward more artsy fare and indie flicks, camp classics and genuine ones. Most of the action stars of the era saw their stars dim in the '90s and beyond, or they shifted into more "serious" roles like becoming governor of California.

Stallone in particular kept churning out action movies even as his audiences waned, filling his resume with flotsam like Demolition Man and Daylight. Eleven years ago, though, Stallone came up with an idea so simple it's kind of genius: Why not pack as many old action stars and as many younger action leads as he could muster into one movie? Separately, movies of his ilk weren't doing that great, but if you packed as many famous faces into 90 minutes as you did creative killings, maybe you'd have something.

There was a time in my life when I would never miss such a movie, and yet I did 11 years ago. This despite The Expendables being a legit box-office hit in 2010, earning more than $100 million in the U.S. and more than a quarter-billion dollars worldwide, spawning two sequels.

I recently sat down to watch The Expendables to see if I could rekindle a love for big, dumb, superhero-free action movies, and if Stallone's late-career effort held up to "classics" like Cobra and Tango & Cash. (OK, if not classics, at least we can agree they're fun viewing? Anyone? Bueller?)

It starts with some promise as gang leader Barney Ross leads his team of mercenaries on a mission to save some hostages from Somali pirates. Yes, Stallone beat Tom Hanks to a pirate movie by two years. His crew includes characters with names like Yin Yang (Li), Hale Caesar (Crews) and Toll Road (Couture). There's the requisite gunplay and quick quips to let us know this crew 1) means business when it comes to kicking ass, and 2) is thick as thieves, able to crack wise on each other's personal predilections.

The team flies away from their successful mission in a plane piloted by Stallone and Statham and marked with Global Wildlife Conservancy labels. Nice cover for a bunch of hired killers! They reconnect back home in New Orleans (and that city has never played less of a role in a movie than this one) at the tattoo shop of a guy named Tool (Mickey Rourke at his Mickey Rourke-iest, all mumbles and ripped shirts and stringy hair. Of course there's a woman half his age draped all over him. Sigh). Soon they're hired by a mysterious rich guy named Church (Willis) to head to Vilena, an island in the Gulf of Mexico, and find out what an American named James Munroe (Eric Roberts) is doing monkeying in the local politics.

It turns out Munroe is ex-CIA using the local army to protect his cocaine operation, and Church is current CIA using the Expendables to do his dirty work and kill the rogue Roberts, who just oozes sleaze as only he can, delivering lines like "being rich is very good. It allows people to be the real asswipes nature intended them to be." If you've ever wondered what "chew the scenery means," watch an Eric Roberts performance.

Most of the movie is the big showdown between the Expendables and the island's army, and there's at least some creativity in the action sequences. At one point, Terry Crews throws a small bomb in the air, and Stallone shoots it with a rifle in the perfect spot to send it flying to destroy a helicopter. Another scene has the team dumping fuel from their plane on a soldier-covered dock, then firing a flare to ignite an inferno of torched extras.

Everyone gets a scene or two to do what they do best. For Li it's martial arts. For Couture and Austin it's hand-to-hand combat. For Stallone it's being the hero in charge (did I mention he wrote and directed the movie?). All the action is set to a soundtrack of classic rock like Creedence Clearwater Revival and Mountain, the two female characters are the very definition of the movie's title, and the politics are confusing for sure. The main takeaway is both the CIA and the ex-CIA dudes are bad. So why did so many Brown soldiers on the island have to die?

Silly question, I know. It's because in these types of action movies, a lot of people need to be shot, torched, blown up, beheaded or otherwise incapacitated to keep us watching. And I did keep watching, through all 103 minutes. Did I watch the sequels? No. But if you enjoyed the cheesy action flicks of yesteryear, you could do worse than watching the Expendables sometime. ♦