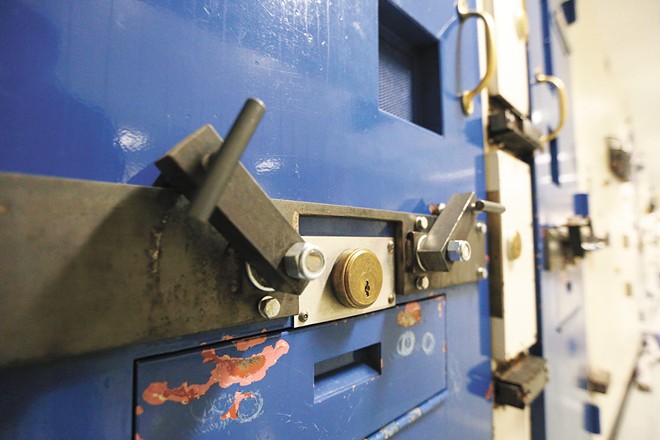 Young Kwak photo
Maddesyn George is being held without bail inside the Spokane County Jail.

She shot him with his own gun. It was the same gun, Maddesyn George tells police, that Kristopher Graber kept next to the bed where he raped her the night before. The same gun, she says, that he pulled on her when she tried to escape.

She shot him in self-defense, she says. She wasn't going to let him hurt her again, she tells police. So once he fell asleep, she took the gun, along with his drugs and money. Graber came looking and found her a day later in the passenger seat of a car northeast of Omak, just inside the Confederated Tribes of the Colville reservation border. He reached through the window, shouting at her, threatening her and grabbing her. Then, she says, he saw the gun and tried to wrestle it away from her. She pulled the trigger.

Graber — known to friends as Buddy — clutched his chest and fell to the ground. He died at 43 years old.

Maddesyn, 27 and a member of the Confederated Tribes of the Colville reservation, told all of this to tribal police investigating the killing in July, according to tribal court documents sent to the Inlander by her attorney. At least one witness backed up key aspects of her account, repeating several times that it appeared her life was in danger in the moment before she pulled the trigger, records show.

But no rape kit was taken. And because the shooting of Graber, a White man, took place on the Colville reservation, the case was referred to the U.S. Department of Justice, which unleashed a slew of federal indictments against Maddesyn George. Those include second-degree murder, possession of a stolen firearm, robbery, possession with intent to distribute methamphetamine and others.

Seven months after she shot and killed her alleged rapist, she remains in Spokane County Jail without bail.

A member of Graber's family tells the Inlander they are not interested in discussing the case until after trial. The U.S. Department of Justice declined to comment when reached by the Inlander. 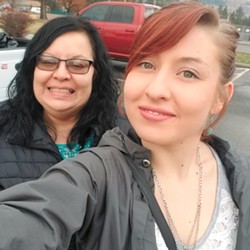 Maddesyn George and her mother, Jody.

Whether or not a jury will agree that she acted in self-defense, some activists and legal experts argue that the case highlights an unequal legal system that punishes a Native woman standing up for herself, yet too often dismisses violence against Indigenous women.

Steve Graham, George's attorney, says part of the problem is the jurisdictional maze between federal, state and tribal courts. Tribal law enforcement does not have the authority to prosecute non-Native people who commit crimes on tribal land, so those cases are referred to either state or federal prosecutors. But the result can be that non-Native people commit crimes on tribal land knowing that cases fall through the cracks — as federal or state prosecutors often decline prosecution. Graham, who's been licensed in Colville Tribal Court for decades, says he's seen that problem on the Colville reservation.

"Nontribal members are allowed to run amok up on that reservation," Graham says.

Meanwhile, federal prosecutors typically have jurisdiction for major crimes committed on tribal land when a Native person is involved, which is why Maddesyn George has been indicted in federal court. But Jonnie Bray, a former prosecutor for the Colville Tribal Courts, doubts federal prosecutors would have taken the case if Maddesyn had been harmed.

"I've never seen the United States prosecute a non-Indian on behalf of the Colville Tribes," Bray says. "And I've been working in the court system for 26 years."

In the hours following the shooting, tribal police asked Maddesyn why she did it.

Maddesyn was initially reluctant to answer, and police stopped the recording, according to the transcript of that interview. But when the recording went back on, she describes what happened the night before, on July 11, when someone she "thought of as a friend" started acting differently than she'd seen before.

Maddesyn's mother, Jody George, tells the Inlander that the family had known Graber, of Omak, for years. He was better known as Buddy, she says, and he used to date Maddesyn's older sister. He was around Maddesyn even after that, Jody says, partly because he occasionally helped fix her car, and partly because he was a meth dealer and her daughter is an addict.

Maddesyn has three felonies on her record — two related to drugs, and one for burglary. Graber, meanwhile, had seven felony convictions on his record. In October 2019, Graber was arrested in Okanogan County with 142 grams of meth, 7.7 grams of heroin and an illegal gun, according to news reports. He was released from jail on the condition that he stayed on electronic home monitoring, but as of May 2020, he'd violated the conditions of his release at least three times, records show. He also had a number of arrests related to domestic violence, including several convictions for violating restraining orders.

The night of July 11, Graber was still on electric home monitoring. He and Maddesyn were scratching lottery tickets on his bed, a typical place to hang out in his small house, Maddesyn recalls to police.

He started getting aggressive and touching her, and she told him "No, stop," but she says he kept going, pinning her down. When she told him, "get the f—- off me," he pulled out a gun from a dresser by his bed, she says. She describes to police how he pulled the clip out and emptied it, then put two bullets back in. She told him she wanted to leave, but he wouldn't let her, telling her, "I don't think you're going anywhere. You don't want to go," as she describes it.

He raped her for half an hour, she says. For a while after, they acted like things were normal, but she felt like she couldn't leave. She tried to lay down with him, thinking that the quicker he went to sleep, the quicker she could leave. A friend picked her up, and they went straight to Jody's place, where Maddesyn's four-month-old daughter was staying as well.

Jody tells the Inlander that Maddesyn seemed off when she saw her Sunday morning.

"She told me that he hurt her," Jody says. But she says her daughter didn't elaborate, and she didn't learn the details until after the shooting.

Graham, her attorney, says two other witnesses recounted to investigators that Maddesyn told them she was sexually assaulted before the shooting. Maddesyn told both her mother and Graham that Graber gave her the money and drugs to, as Graham puts it, "make nice with her so she wouldn't go to the police." But she took the gun so it couldn't be used against her again.

Maddesyn did not immediately report the alleged assault to police. Jody says her daughter had grown distrustful of law enforcement, due in part to previous incidents involving men who hurt her. Plus, Graham has noted in court filings, she had "seen first hand how this recidivist's behavior was unchecked by any constraints of the criminal justice system."

Bray, the former prosecutor for the Colville Tribal Courts, says she understands why Maddesyn wouldn't go to police. They would be looking at her as an addict, Bray says, and checking to see if she had warrants. Colville Tribal Police did not respond to multiple messages seeking comment for this story.

"Meanwhile, we have had multiple tribal women killed on our reservation and no indication anyone is investigating those cases," Bray says.

On July 12, Graber was looking for her. He found her sitting in a car just north of Omak, and just inside the edge of the Colville reservation. A neighbor there says Graber had come by with a shotgun earlier that day calling for Maddesyn. That neighbor saw the shooting. He described Graber as a "dangerous person" to police, repeating that her life was in danger, and adding that "it don't bother him to beat the living shit out of a woman. He's known for that."

Maddesyn called her mom almost immediately, saying she shot someone and was waiting for the cops to arrive.

"She said, 'I just grabbed the gun before him, and I shot it," Jody George says.

Jody George still asks herself: What if Maddesyn didn't grab the gun first? Even if the altercation had ended without anyone dying, would her daughter's alleged rapist ever be held accountable? She doubts it.

"I don't think anything would happen to him," Jody says.

Growing up on the reservation, Jody says she's known girls who have gone missing, never to be heard from again. She's known girls who used to live close by, but whose bodies were found dismembered and buried by the river, yet the killer was never found.

Lawmakers and advocates have called missing and murdered Indigenous women and girls a crisis. But it's been difficult to pin down statistics that truly show the scope of the issue. The Centers for Disease Control and Prevention reports that murder is the third-leading cause of death among Native women, and rates of violence on reservations can be up to 10 times higher than the national average. The Seattle-based Urban Indian Health Institute says there were 5,712 cases of missing Indigenous women reported by the National Crime Information Center in 2016, yet the DOJ only logged 116. That same Health Institute report identified 506 missing or murdered Indigenous women cases, but acknowledged that was an undercount. Washington had the second-highest number of missing or murdered Indigenous women of any state, the report found, with 71.

Tribal courts have jurisdiction if a Native person commits a crime against another Native person. But when cases involve a non-Native person and are referred to the federal government, U.S. attorneys are often unwilling to prosecute. They decline just under half of cases on reservations overall, according to the U.S. Government Accountability Office. Most commonly denied were assault and sexual assault cases.

And there remains a lack of clarity at times over who has jurisdiction. David Rogers, missing and murdered Indigenous persons coordinator for the U.S. attorney's office, tells the Inlander that a major crime committed by a non-Native against a Native on the Colville reservation would fall under federal jurisdiction. But Graham and Bray, both with experience in Colville Tribal Court, say it would be referred to Okanogan County, under a federal law called Public Law 280 that applies to some tribes and gives authority to states in those cases. And Graham says those cases can become an afterthought for state prosecutors.

Earth-Feather Sovereign, a member of the Colville Tribes and founder of the nonprofit organization Missing and Murdered Indigenous Women Washington, says non-Native people too often are not prosecuted when they harm women on tribal land. She says it's partly why she hasn't moved back to the Colville reservation.

"I am really fearful that my daughters would become a victim," she says.

Sovereign says she was disheartened to hear about this case — not only because she fears that if it had been a Native woman who was killed, police and courts may not have taken the case seriously, but because she thinks Maddesyn must have been fearing for her safety.

"She probably didn't want to get raped again. She probably did feel like he was going to murder her," Sovereign says. "She was probably feeling like she had to put it in her own hands to get justice for herself. It takes a lot for someone to feel like they need to do something like that to another human being." ♦