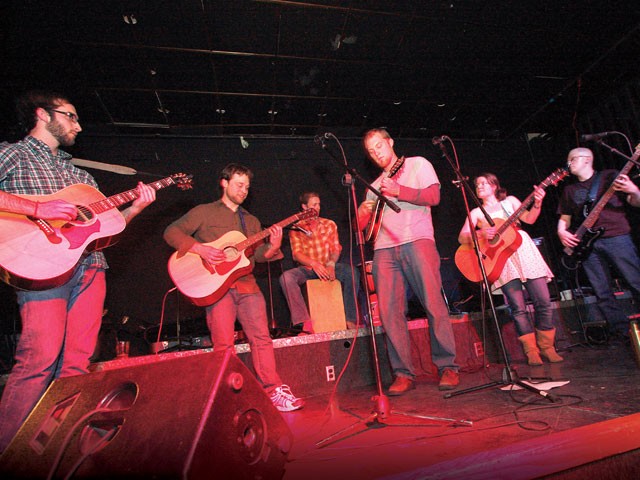 “You can feel the energy when you’re here,” says Adam Kogler: “Living in Seattle, you think Spokane’s a waste-land, but I was surprised by all the good musicians.”

Kogler moved to Spokane two years ago and has since submerged himself in the local music scene. He booked shows on occasion for the old Empyrean space and hosts open mic each Monday at the current location. But long sets, lengthy sound checks and lost audiences gave birth to an idea: The Revolving Music Project.

“Most audiences show up for their friend and then leave,” he says.

“Forty to forty-five minutes is too long for one person to play. Even if you’re really good, it all starts to sound the same.”

Kogler has taken his revelations and created a new template for shows. The project works like this: Four musicians take the stage on a given night, playing three songs on their own, then collaborating on one song with the artist before and then the artist after them. Sound checks are done before the show. Instruments are ready and waiting on stage. Sets are shorter.

“We wanted to cut down on the technical time, yet allow different instruments and musicians to play with one another,” Kogler says. “The collaboration is where the magic happens. It’s fresh, diverse and merges different audiences.”

On a Thursday night in late April, the Empyrean is swarming with more than your average number of musicians and skinny jeans. It’s the first installation of Kogler’s project, and following a shorter-than-usual sound check, a bass, mandolin and acoustic guitar take the stage. Nothing flows here quite like a well-polished, rehearsed act, but the music is new, exciting — well worth hearing for the first time.

The entire show is kind of like a singer-songwriter slumber party.

On stage, everyone shares their dirty laundry, songs and secrets. You’ll hear a compilation of heartbreak, social injustices and, occasionally, some strategically placed swear words.

For now, Kogler says the project is focusing on the singer-songwriter genre — he thinks that format works easiest for now, he says.

“We’re here to have a good time, present something new and hope it goes well,” he says. “My job right now is to get people in the door and hopefully get everyone involved in a good night.”