As the first lady of Spokane hip-hop, Jaeda's pretty sure she'll prove you wrong. 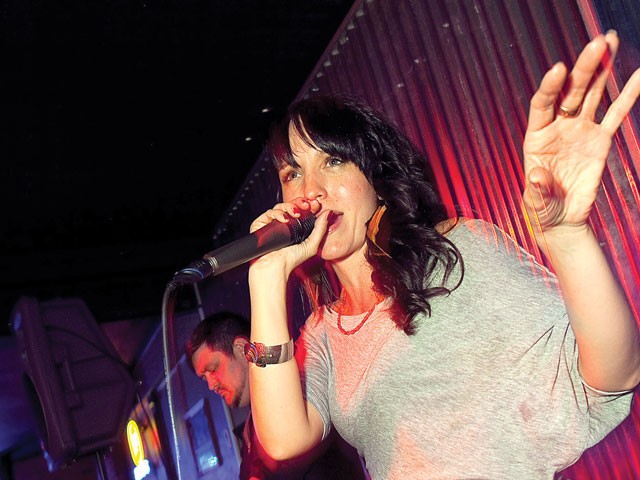 "Not knowing what you’re going to say and what’s going to come out of your brain… it’s such a rush. You never feel more alive.”

Jaeda Glasgow, the woman who has turned heads in Spokane hip-hop over the past few years, is recalling the moment when she knew she could do it — the precise second she knew she could write lyrics, capture the attention of a crowd and rap them into submission.

There was an audience of thousands of people in a Dutch drum and bass club. It was 2004 and Jaeda, who was touring as backup dancer with psych-rapper Th’ Mole, had meandered away from her friends and found herself here in the crowd. There was a DJ. The beat. The energy. A break in the crowd. She grabbed the mic.

“It’s funny because I’ve always been a writer.

I started with keeping journals, and that was my therapy through all those teenage years that were so difficult. I always wrote these cheesy hallmark poems.”

But at the club, she says, is where she changed from a poet to a performer. A lyricist to a full-blown emcee.

If I didn’t play music…,” she pauses, “No, I couldn’t not play it. It’s one of those things I’m so passionate about. I hate it sometimes. But if I didn’t do it, I just wouldn’t be happy.”

These days when she’s onstage — whether she’s performing at a punk club or in a boxing ring— she’s a fearless performer. Among the deep baritones of the Bad Penmanship crew (a local hip-hop collective of which she says she’s the “First Lady”), Jaeda is a point-blank shot. She cannot be ignored. On the mic, she raps about love and spirituality like she’s talking on the phone with a girlfriend: chatty, blunt, unafraid to tell you when you’re acting like a skank-ho. She dances to the beats and smiles to the crowd — crowds that tend to be estrogen-heavy, especially at her solo shows. Girls dance and sing back at her. Jaeda smiles thank-you’s at them, handing the mic off to her fans to finish the lyrics she’s started.

“I’m kind of soft-spoken, but I have this femininity, and then I get onstage and I have a lot of conviction and force in what I’m saying,” she says. “I take people by surprise, and they have no idea. They are like, ‘Oh, white girl? Rapper? I get it.’ And I’m like ‘OK, yeah. Now — wait.”

Jaeda says she thrives on judgments like this — not because she has something to prove to people, just that she likes the challenge for herself.

“I invite that. I am always proving new things to myself and pushing my boundaries,” she says. “I think it’s a cool vehicle being female. We’re not one-sided,” she says. “I’m a mom and a wife … I’m a country girl and then I come into the city and I’m this urban hip-hop artist. And my music is my time.”