Where to hike, from Deep Creek Canyon to Mount Spokane. 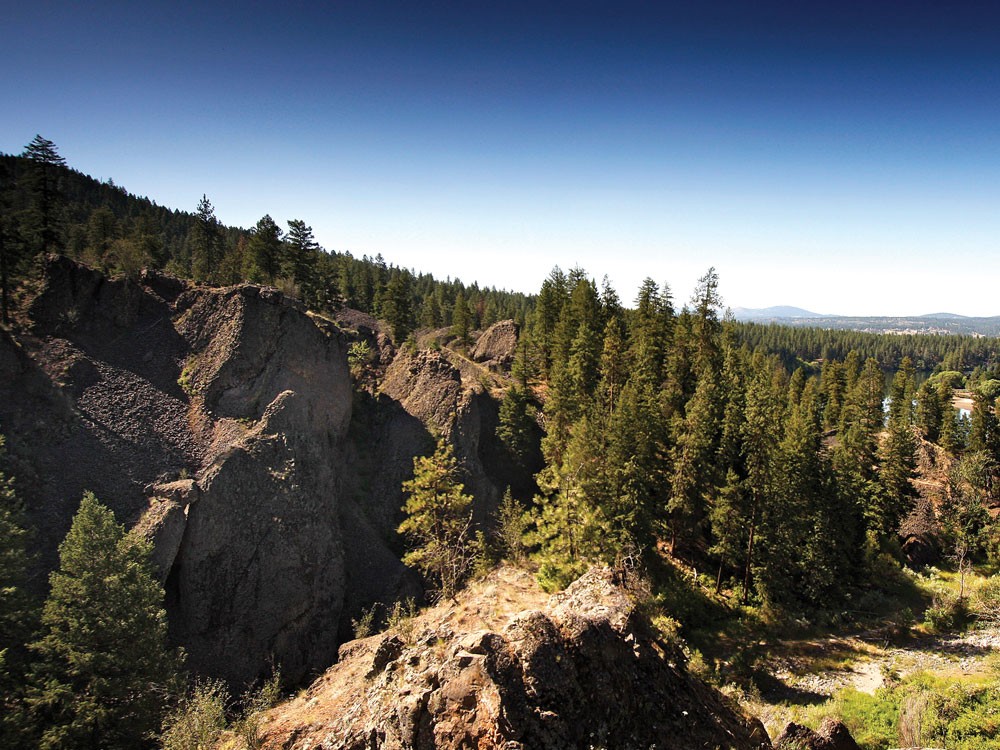 With undulating fields of rock emanating in every direction, silence screaming into my ears, I have just one thought: I’m on Mars.

But since Deep Creek Canyon near Nine Mile Falls is only, like, 20 minutes from downtown Spokane, I’m pretty confident that no Martian will blast me with his ray gun.

I’m stunned nonetheless. Towers of basalt crumble around me, and hapless trees hang onto the rocks for dear life. I listen for any sound that might signal the location of a chipmunk or hawk and smell the forest’s needles cooking in the hot summer air.

And, of course, I’m preoccupied with walking. (Or hiking, as it’s called in nature.)

This is Trail 411, one of the many fingerlings running through Riverside State Park. It connects the Centennial Trail — the paved and popular thoroughfare — to the park’s 25-mile loop, a little-known behemoth of a hike that stretches from way up here down to the park’s equestrian area, just south of Bowl and Pitcher.

Someday, that loop’s for me. But today, I’m on a smaller amble, a little three-miler that will take me from navigating this alien landscape to gazing up at a dense forest canopy on a ridge far above the Spokane River to the deep, cool solitude of Deep Creek’s bed.

It’s really quite simple. Begin at the Centennial Trail parking lot on Carlson Road. (Take Nine Mile Road, and turn left on Charles Road. Take the first left after crossing Nine Mile Dam, on Carlson, and continue forward about half-mile.) Cross the street to the trailhead and at the trail’s first main juncture, take a left. This is the 25-mile loop. Stick to this trail (while occasionally jutting off for exploratory purposes, like on Trail 411) and you’ll end up at the Deep Creek Overlook.

Here, you won’t forget you’re on Earth. You’ll just be awfully glad about it.

In the winter, Mount Spokane is ruled by skiers, snowboarders and snowshoers. But in the spring, summer and fall, hikers rule (along with some mountain bikers). Miles and miles of trails lace this mountain. For a tough yet peaceful jaunt, hike from the park’s entrance to the top of Mount Kit Carson.

Spokane Valley is a circus of pavement and traffic. And it’s also the home of the many-acred Dishman Hills. It’s been likened to New York’s Central Park, but there’s one main difference: Central Park was built. Dishman is how it’s been for centuries. Remember, this is an urban hike — so for more quietude, hike deeper.

In the age-old battle between hikers and mountain bikers, the Bluffs abide. Here lies peace. Nestled on the westward face of the South Hill, the trails were built by industrious bikers but now are used by all. Move aside, you waffle-stomping visitors, and thank your treaded-tire hosts as they politely, and slowly, cruise by.