The Death of Dispensaries

How a month of memos, votes, raids and a veto killed Washington's — and maybe the nation's — medical marijuana industry. 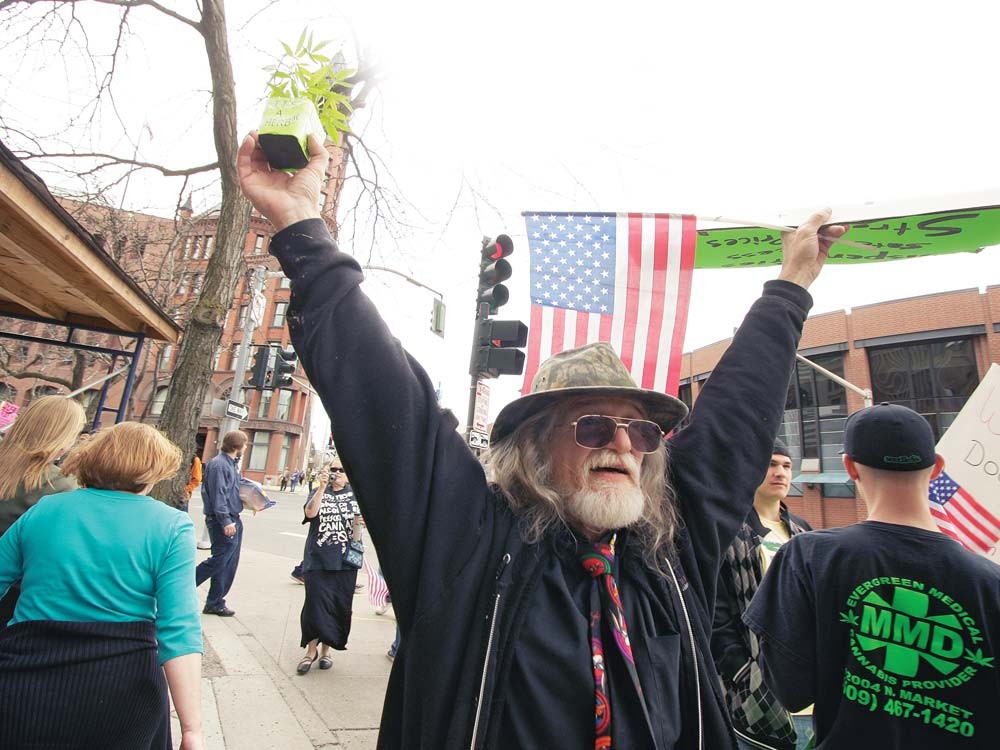 A few weeks ago, there were about twice as many medical marijuana dispensaries in Spokane County than there were McDonald’s. Now there are none.

After almost two years of unregulated growth that led to an estimated 40 dispensaries in the county, it took a sweep of raids on Thursday and a swipe of the veto pen on Friday to completely dismantle the county’s booming marketplace for medical pot.

Federal officials consider it a victory: Justice has been served to the “marijuana stores” raking in “high profits.”

Thomas Rice, the deputy U.S. attorney in Eastern Washington, says the point of the “federal operation” carried out by his office was to close every dispensary in town, without exception. As of Saturday, that was accomplished.

On Monday, dozens of activists milled about in front of Spokane’s federal courthouse, protesting the raids. Rhonda Duncan’s dispensary, Club Compassion, was one of those shops shut down by the U.S.

“When you’re in a wheelchair, you can’t go and see your dealer down the street,” Duncan says. “It’s ludicrous. It’s sickening.”

About an hour before the raids began on Thursday, the Seattle-based Cannabis Defense Coalition was in town giving raid preparedness training to dispensary owners at the downtown Spokane Public Library.

Duncan was running late when she got a knock on her dispensary’s door, which has served about 2,000 patients.

Outside were “men in black with guns this big” — she extends her arms her entire five-and-a-half-foot wingspan — “I swear.”

For three hours, 15 cops searched the shop and seized everything they wanted: the six ounces of pot she estimates she had on hand, patient files, her cell phone and bank card, computers, her business license and plants she had growing.

“To me, there was a lot of needless destruction,” she says. “It was over the top.”

The shop still shows signs of the ransacking. There’s potted soil all over the ground, and the occasional blue rubber glove sits turned in on itself, left behind by law enforcement.

Rice, in the U.S. attorney’s office, says the raids were close to the last step of an operation that first publicly began early last month, when his boss, U.S. Attorney Michael Ormsby, sent letters to the dispensaries’ landlords. He told them they could face prison time if they let their tenants remain in business. His warning largely worked.

“They certainly did a good job when they rattled their sabers,” Duncan says of the letters to landlords. Ormsby then sent letters to the “marijuana store” operators, as he calls them, telling them of the stiff penalties they could face. More dispensaries shut their doors.

Raids awaited the few that remained open. “What prompted it in this district … was the rapid escalation of dispensaries, especially near schools,” says Rice, who wouldn’t comment on how many shops were raided other than to say “less than 10.”

No one was arrested during the raids, but Rice says that doesn’t mean arrests aren’t forthcoming. “We’re going to analyze the evidence that was recovered at the scenes and determine the next step of action,” he says.

Asked when the operation that led to the raids would be complete, Rice wouldn’t say. “That remains to be seen,” he says.

When Gregoire vetoed most of the dispensary bill — which passed twice in the Senate and once in the House — she based her decision largely on a memo from Ormsby.

“My foremost concern is that a number of provisions could put state employees at risk of serious personal consequences,” she commented after her veto. “The two United States Attorneys in Washington state were very direct in telling me that state employees performing activities under this bill would not be protected from civil or criminal liability under the federal law.”

She used her sectional veto powers to do away with all the sections involving state employees. If approved, the bill would have had the state regulate all aspects of medical cannabis, shepherding it from farm to patient and requiring the state’s agriculture department to license farmers and the health department to oversee dispensaries.

“In terms of addressing the two key priorities — protecting patients from arrest and prosecution, and providing safe access to medicine — it does neither of those,” says Alison Holcomb, drug policy director of the ACLU of Washington.

Part of the legislation that was effectively vetoed was the patient registry, something that exists in every other state allowing medical marijuana. Law enforcement agencies have long said a registry is key to their support, but patients never liked it due to privacy concerns.

“The registry is dead,” Holcomb says. “She kept 401 [the section allowing for arrest protection for patients if they registered with the state] … but vetoed the registry, making 401 inoperable.”

But there are parts that survived. Parental rights of medical marijuana patients have been strengthened. Patient collectives are now also legal, allowing for the growth of up to 45 plants. (The limit for a single patient remains at 15 plants.)

But, Holcomb says, there is some time to rectify the veto. With legislators still trying to balance the state’s budget in special session, state Sen. Jeanne Kohl-Welles told the Seattle Weekly over the weekend that she was preparing new legislation dealing with sections vetoed by the governor. Mainly, she might get the registry back, along with stronger arrest and prosecution protections for patients.

“We could live with the registry as it was designed,” Holcomb says. “We’re not thrilled with it, but certainly we’re even less thrilled now that patients have less access to cannabis.”

And 15 lawmakers — including Spokane Rep. Andy Billig — sent a letter to state Attorney General Rob McKenna, asking for his “urgent opinion and counsel in the wake of Governor Gregoire’s veto” and questioning the legitimacy of Gregoire’s arguments to veto the bill.

“Without enactment of this bill, Washington will fall victim to ‘gray market’ dispensaries, which are so prevalent in California,” the letter reads. “At this critical time, we need your guidance as we craft a new proposal to improve Washington’s medical cannabis law.”

She says she can’t figure out why she and most of the other dispensaries were largely left alone, only to be shut down in the course of a few weeks.

“If they were going to do this, maybe they should have done it three years ago,” she says. When she was raided, her initial reaction was to tell everyone she’d stay open.

But now she’s “reassessed and taken a step back.” She doesn’t want to get arrested. “I’m not in any hurry to open my doors,” she says. “No one else I’ve talked to is either.” She does say, “If they want to nail me to a cross, they certainly have enough to do that.”

Still, Duncan says she will stay involved in the medical marijuana community: growing her own, teaching others how to grow their own and continuing to speak out.

“I will never believe that the government’s good opinion supersedes that of my doctor,” she says. “Never.”