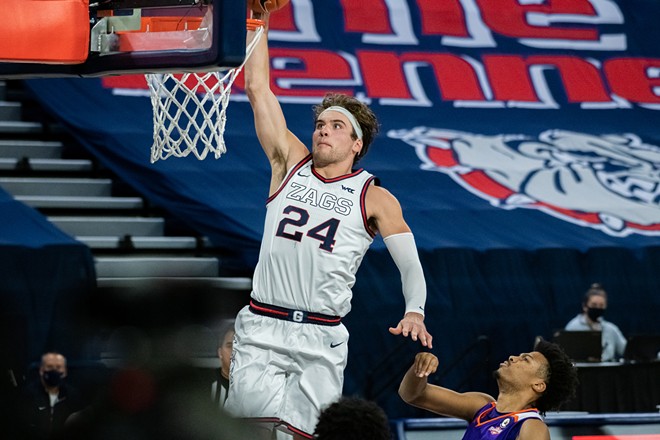 Erick Doxey
The Zags are rolling so far in the NCAA tournament.

In the weirdest, wackiest season ever, we should have seen this coming.

This month is known for its madness. Every year, without fail, March delivers the most improbable upsets and sweetest Cinderella stories. It’s never brought it quite like this, though. According to David Worlock, director of statistics for the NCAA, the tournament defines an upset as a win by a team seeded five or more spots below their opponent. So far there have been 12 such upsets through the first two rounds. The record for an entire tournament is 13. Perhaps there’s something else we should have seen coming. The Zags, of course.

The David turned Goliath of the sport. A program that once upon a time put together unexpected Cinderella run after unexpected Cinderella run has become the most trustworthy, reliable team in the tournament. After navigating a regular season that included COVID outbreaks within its program, and those it was set to play, without skipping a beat, the Zags are rolling through the tournament so far.

Over the first two games, Gonzaga’s won by an average of 29.5 points. Best among Sweet Sixteen teams by a sizable margin. Sure, the top seeds are supposed to win, and easily, in these early rounds. But so far that hasn’t been the case for them all. We’ve already seen Illinois, a 1 seed, pack its bags and head home, as well as a pair of 2 seeds in Ohio State and Iowa, and three of the of 3 seeds — Texas, Kansas and West Virginia.

Forget survive and advance, Gonzaga’s been thriving to advance.

First up was the 16 seed Norfolk State Spartans. The Zags blasted them by 43 points. Since the NCAA Tournament expanded to 64 teams in 1985, and thus brought 16 seeds into the mix, only once has a 1 seed succumbed in the first round. Gonzaga, as 99 percent of 1 seeds have before it, advanced.

Then came a tougher test, the Oklahoma Sooners. A team from the Big 12, a power conference. After a disastrous run that saw them lose five of six games heading into the NCAA Tournament, the Sooners plummeted and wound up with an 8 seed. Immediately prior to stumbling, less than a month ago, the Sooners were in the top 10 of the AP Poll. Good, right?

“We’ve been top 10 this year, we’ve beaten plenty of teams that are just as good as Gonzaga,” Oklahoma forward Brady Manek said prior to the game. “We’re going into this game like we have nothing to lose, but they’re beatable. We just have to play basketball and leave it all out there.”

The quote sounded a lot like one from former West Virginia big man Deniz Kilicli, whose Mountaineers got demolished by Gonzaga in the 2012 NCAA Tournament, back in the days before the Zags could earn a 1 seed, when they were still something of a plucky underdog. "I think they're physical in their conference,” Kilicli said prior to the game, “but we play in the Big East."

Flash forward to 2021 and West Virginia is now in the Big 12, just like Oklahoma, and no doubt one of those teams Manek was thinking of as being just as good as Gonzaga. The Big 12 was seen as, along with the Big Ten, one of the two best leagues in the country this season. It sent seven teams to the NCAA Tournament, and the Big Ten sent nine teams. Just one remains from each league.

Gonzaga’s been doubted as an underdog, and now that it’s a powerhouse it’s being undervalued. In both situations, the Zags have rolled.

Now, Gonzaga finds itself one of just 16 teams left. The No. 1 overall seed in a field that contains a 15 seed, a 12 and two 11s. If the bracket broke as expected, based on seeding, the Sweet Sixteen would be entirely 1s, 2s, 3s and 4s. It’s not. In fact, the average seed of this year’s Sweet 16 is 5.88, an NCAA Tournament record. On paper, there’s never been an easier path to a championship. The maddest March of all time, in that regard.

Which is perfect for a program that once upon a time caused the madness, but is now set to benefit from it.

Gonzaga faces off with 5 seed Creighton on Sunday in the Sweet Sixteen at 11:10 in the morning on CBS.