Heart of the Matter

The Kladar kids are living proof that age doesn't matter, at least when it comes to making a difference 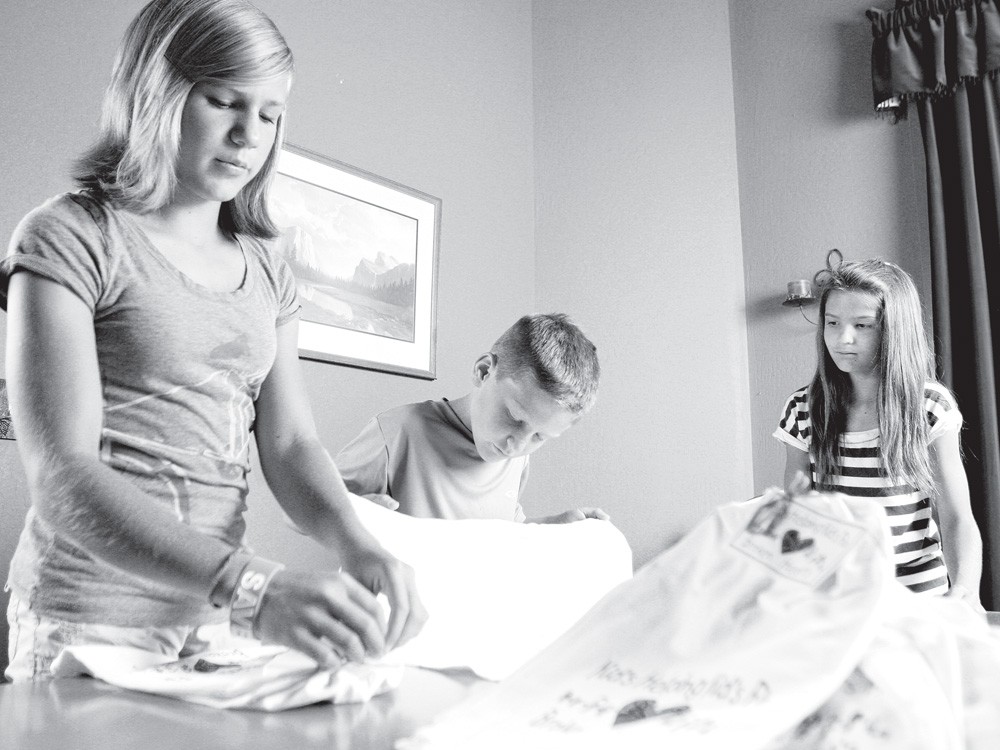 Young Kwak
From left, Sarah, Thomas and Emily Kladar tie towels to sell for their charity. So far, they've sold more than 6,000 of them.

Birthdays are a big deal when you’re a kid. The cake and the party are nice, but presents are usually the locus of excitement. So when Emily Kladar looks you in the eyes and, with a smile, says she and her brothers and sisters don’t get any presents on their birthdays, it sounds a bit odd. Most kids would be reduced to tears if they didn’t get any birthday presents. But these siblings have set their sights on a different kind of prize. And if you feel sorry for them, then you don’t know what they’re capable of.

Phil Kladar, a general surgeon at Kootenai Medical Center in Coeur d’Alene, and his wife, Katie, a former nurse, have five children ages 3-13. Phil and Katie decided to start a tradition: Everyone picks a charity on their birthday and has friends make donations in place of gifts.

It’s a unique twist on philanthropy that paved the way for their three eldest — Thomas, 9, Emily, 11, and Sarah, 13 — to create Kids Helping Kids Fix Broken Hearts, a nonprofit that the siblings started in 2008 to provide financial assistance to children undergoing life-saving cardiac surgery. To date, they have raised over $57,000, which has gone to help more than a dozen children. And they’re only just getting started.

Sitting around the table at their family’s expansive Hayden, Idaho, home, the children are strikingly poised. They don’t fidget, they don’t talk over one another, and their speech is eloquent beyond their years. After a moment of quiet discussion among themselves, Sarah emerges to tell the story of how a family vacation led to them leading a full-fledged 501(c)(3) organization.

In 2008, the Kladar family visited the kids’ grandparents in Mexico. Because of Phil and Katie’s involvement in medicine, they made a stop at a local pediatric clinic. The kids noticed something called the “Wall of Hearts,” which Sarah says is comprised of photos of all the children seen by the clinic who would die without heart surgery. The experience hit them hard.

“We came back to Idaho and we just thought, ‘We gotta do something about this,’ so we started selling lemonade and walking dogs,” says Sarah.

But those jobs weren’t meeting their goals. They had to up their game.

“We were like, ‘If we’re gonna do anything with this, we need to do something big and creative,’” says Sarah. “And so Emily drew a logo, because she’s always been an artist, and a very good one at that, and I came up with the name for it.”

After they laid the groundwork for the organization, all they had to do was find a new way to raise funds. Initially, T-shirts were discussed but dismissed because the kids felt they are overdone. Next came the coffee mugs, but those were too expensive to make.

Finally, Sarah explains, her sister Emily brought up the idea to make dish towels, “because they are something practical that everyone uses.”

At a selling price of $5 per towel, it took the Kladar kids only about seven months to raise $15,000, which they then delivered to the Mexican clinic in person. The money from that effort alone helped 13 children.

“It’s just this surreal experience knowing what’s on the line,” Sarah says of the experience. “My mom thought it would be over after that.”

But the kids insisted on continuing with their project, and the Kladar kids have now sold over 6,000 dishtowels with Emily’s logo printed on the front. They’ve recruited not only friends but teachers, as well, to help them prepare and tie the towels, often sacrificing their recess time to work.

It paid off. Not only do they have a dishtowel in each state, they also have one in 31 countries across the globe. It’s 9-year-old Thomas’ job to keep track of where the towels have been sent: He marks the spots on a cardboard-mounted map with heart stickers.

Their efforts have won them invitations to speak at area events, in addition to several awards, scholarships and nominations — including the 2011 Charity of the Year award, for which they are currently in the national top 10.

Though the Kladars have proven they can play ball nationally, those close to home continue to be impressed by their impact. Mary Savage, director of development for the Sacred Heart Children’s Foundation, has worked closely with the Kladar children and says that their unique traits are what have propelled them.

“I am just so impressed with these children, because they had this vision three years ago, and most kids of that age would [only] get excited about doing it for a year or maybe a few months,” says Savage. “They just feel like age doesn’t matter if you put your mind to something.”

For all their accomplishments, the family insists they haven’t had to push Kids Helping Kids — the community’s embrace has gone a long way.

“I have so little time to put into it, and it’s still as successful as it is,” says Katie. “We really take very little credit for it. It’s beyond us.”

“We just let it roll,” adds Emily with a smile.

Help A Kid
Locally, there is an abundance of charities geared toward helping kids in need, especially kids suffering from illness. In addition to Kids Helping Kids Fix Broken Hearts, here are some other children’s organizations to check out.

Starlight Children’s Foundation
The effects of illness often extend beyond the physical symptoms themselves, but the unseen ramifications of disease often go unnoticed. The Starlight Children’s Foundation supports children and the families of children who are experiencing illness by providing entertainment, education and activities for those in need, through events like family outings and bedside entertainment technology. Families also have access to alternative educational material in the form of comics, webisodes, and interactive games that aim to help sick children understand their condition, how to take care of themselves and what to expect from hospital procedures. Visit: starlight.org

Ronald McDonald House Charities
In addition to the emotional and social support, families with a sick child sometimes need further help with basics like a place to stay. If a child requires regular visits to a hospital far away from home, this can become especially crucial. The Ronald McDonald House Charities of Spokane has all those bases covered, offering support, housing, and a place for kids to play. Visit: rmhcspokane.org

Children’s Miracle Network
This organization strives to take on childhood illness itself, funding nonprofit hospitals and programs that conduct research, develop technology and care for sick children. The Children’s Miracle Network of the Inland Northwest supports 10 local hospitals and programs, with 100 percent of the funds staying in the area. Children with a variety of conditions, ranging from diseases like cancer to emotional and mental trauma stemming from abuse, are treated regardless of ability to pay for care. Visit: cmnspokane.org (Tiffany Harms)