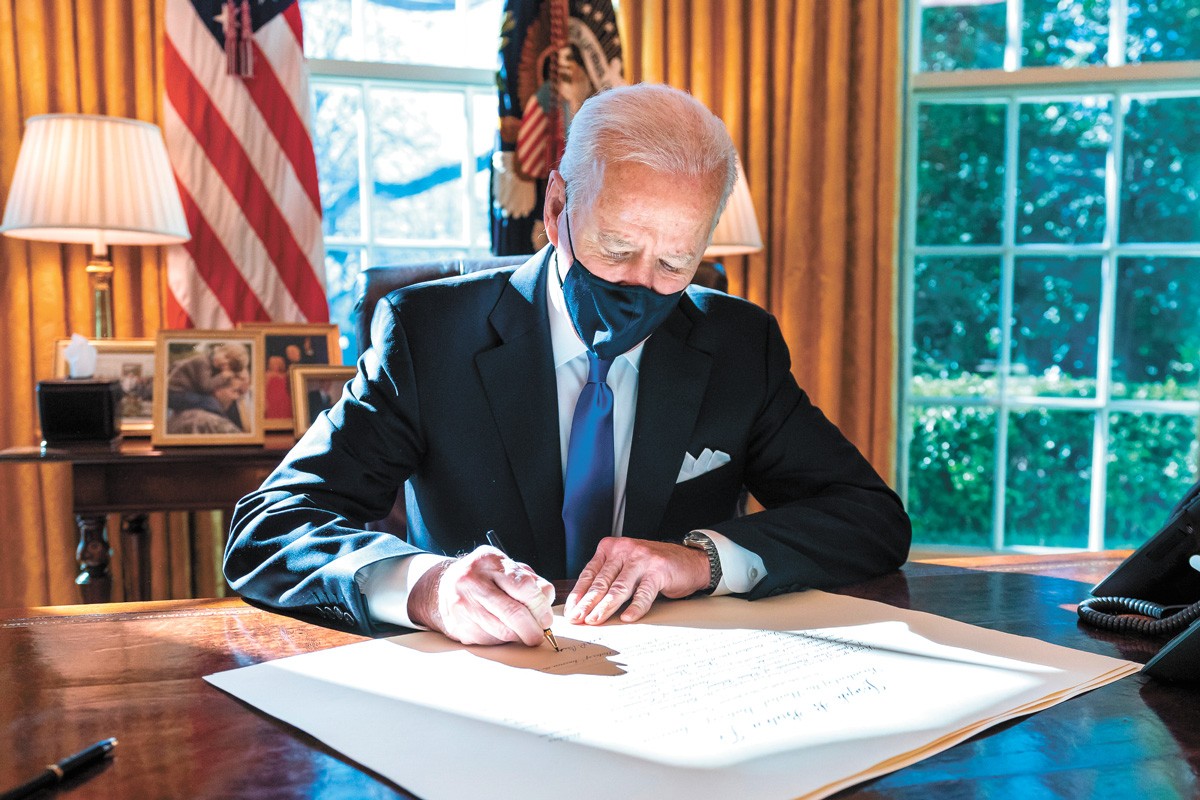 Official White House Photo
The author argues that President Biden is "an unlikely action hero in an era of expected inaction."

Early this year, a blinding snowstorm forced me to turn back from a harrowing I-90 trek across the state. On a more recent drive, though, I exited the freeway in search of a gas station at Snoqualmie Pass. The sun shone brightly and reflected off soaring rows of plowed snow, giving me a safe corridor to refuel.

It feels like... hope! (And you're forgiven if you've forgotten that sensation; it's been awhile.)

Hope is a tricky topic for anyone who doesn't want to appear naïve, let alone a journalist trained to be skeptical. But, truth be told, the cracks in my hard-boiled shell had already begun.

That doesn't mean I've forgotten the more than half a million people who have died from the coronavirus or that the toll didn't have to be that high.

It doesn't mean I've forgotten people who overtly bear arms but tell me I'm living in fear for thoughtfully wearing a mask. Or, who say, "We have to live our lives" without considering how many other lives that will take.

No, it will take a long time to forget this era of tragic stupidity, which exacerbated the pandemic and placed in charge a man who could see himself only as the victim. The prospect of his re-election was a recurring nightmare.

By "this" I mean the rapid development of a vaccine and the inauguration of a mature adult as the leader of the free world. Joe Biden wasn't my first choice, but he appears to be the perfect president for this moment in history. He is calm, focused and driven by the facts. He doesn't preen, whine or tweet. He is gloriously boring. And — this can't be overstated — he gets stuff done.

Hope is a tricky topic for anyone who doesn't want to appear naïve, let alone a journalist trained to be skeptical.

He's an unlikely action hero in an era of expected inaction.

For instance, the American Rescue Plan, which sped through Congress without a single Republican vote, is a towering achievement brimming with baubles of hope, including:

A $300-a-week supplement to unemployment benefits.

A huge expansion of child tax credits and the Earned Income Tax Credit that will lift half of all children out of poverty and make child care a reality for millions of families. One of the more brutal aspects of the pandemic is how it has cost so many parents, especially mothers, their jobs.

Generous new subsidies that will reduce the premiums in Obamacare plans.

A huge infusion of cash for public health agencies and vaccination efforts.

As someone who used to write about policy and politics, I find that list breathtaking. Any one of those bullet points would be a major bill by itself. Most of them have been proposed and debated ad nauseam over the years. To see them pass all at once is incredible.

And yet, people are carping about the things that weren't included, and I have to wonder about their expectations. First time following politics? How do they ever have hope when they allow the perfect to be the enemy of the extraordinary?

Similarly, naysayers are picking apart the vaccines' rollout rather than reveling in their availability. We are looking at everyone who wants to be vaccinated getting jabbed before Independence Day. Who thought that was possible last year at this time?

Back then, I kept a journal as this nightmare unfolded. I was devastated as I came to realize what this would mean for family and friends. Would life ever be the same? Scientists are still searching for an AIDS vaccine. Would it take that long?

The last time I dined at a restaurant was early March 2020. That's also the last time I hugged my son. The last time I stepped into a store was Mother's Day. My COVID pod has been my daughter, who attends college from home; my girlfriend; and her roommate mom. Everybody else has been kept at a distance.

I won't pretend this has been particularly hard on me. It hasn't been. I don't have to go to work. I haven't had to shepherd cooped-up kids through online learning. I haven't lost any loved ones to the virus. I don't own a business that's teetering on the edge or already closed.

But optimism is pushing out fear, anxiety and sadness. Our hearts are becoming lighter. Our breathing is becoming easier. Soon this long winter of our discontent will be history, just like the Trump presidency. So, go ahead and give hope a hug.

Because here comes the sun. ♦