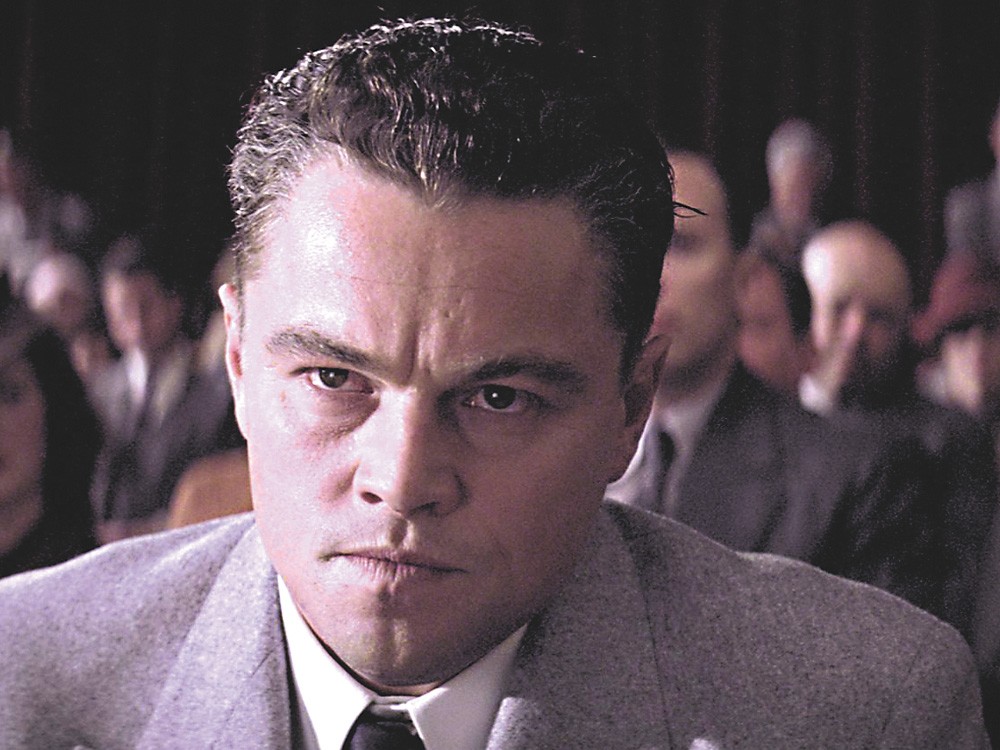 DiCaprio, waiting to slip into something a little more comfortable

This is not a by-the-numbers biography. Screenwriter Dustin Lance Black (Milk) has fashioned a twisting, turning, time-jumping script that begins with Hoover as an older man, introducing him as a ferocious Commie-hater, then jumps back to his early days at what was initially called the Bureau of Investigation, and even further back to him as a young lad being told by his domineering mom (Judi Dench) that he would “someday restore our family to greatness.”

The next couple of hours fly deftly by, the film showing what Hoover became, then explaining the multitude of people and personal circumstances that led to it. The non-linear storytelling gets a little confusing at times, but the film’s rhythms are aided by marvelous makeup work that ages the film’s lead trio (DiCaprio’s Hoover, Armie Hammer’s Clyde Tolson, Naomi Watts’ Helen Gandy) over a period of about 50 years. The prosthetics help you keep track of just where the story is in time.

Time is what the film is all about. Black and Eastwood set it up with Hoover, late in his career, dictating his life story to an ever-changing string of young FBI agents sitting at typewriters, taking most of his words as the gospel truth, but unafraid to question him when they’re not clear on something. It turns out that there’s plenty that isn’t clear, and the film ends up challenging many of Hoover’s boasts, or at least the sympathetic, positive picture he paints of himself. History shows that he had many detractors, including numerous presidents, who tried unsuccessfully to remove him from his post. But he managed to stay, regularly spouting off about the difference between heroes and villains, always believing he was a hero.

In a superb performance that’s going to earn him an Oscar nomination (I’m willing to take bets on this), DiCaprio gives Hoover an exciting edge as a young man, and manages to put across the awful emotional weight that has accumulated on his shoulders as an old man. He plays the part with a purposeful me-against-the-world attitude. There’s also excellent support from Hammer (The Social Network) as his protégé and right-hand man, and from Dench, who exquisitely uses her brief screen time to make you feel her quietly burning intensity.

The film acknowledges that Hoover was responsible for helping to clean up and protect America but never puts a halo over him. A big chunk of it is dedicated to the 1932 kidnapping of the Lindbergh baby, a case that made Hoover’s name. But there’s also a major focus on his objections to the civil rights movement and his hatred of Martin Luther King, Jr.

Eastwood includes a few bursts of disturbing violence, but less than you would expect in a cops-and-criminals story by him. There are only allusions to Hoover’s homosexuality and his gambling problems and accompanying debts to the mob. But for those who are searching for the salacious, there is indeed a scene of him sadly but lovingly donning a rather nice cocktail dress.