Having totally won America's Civil War, a soldier lands on the red planet and tries to stop theirs. 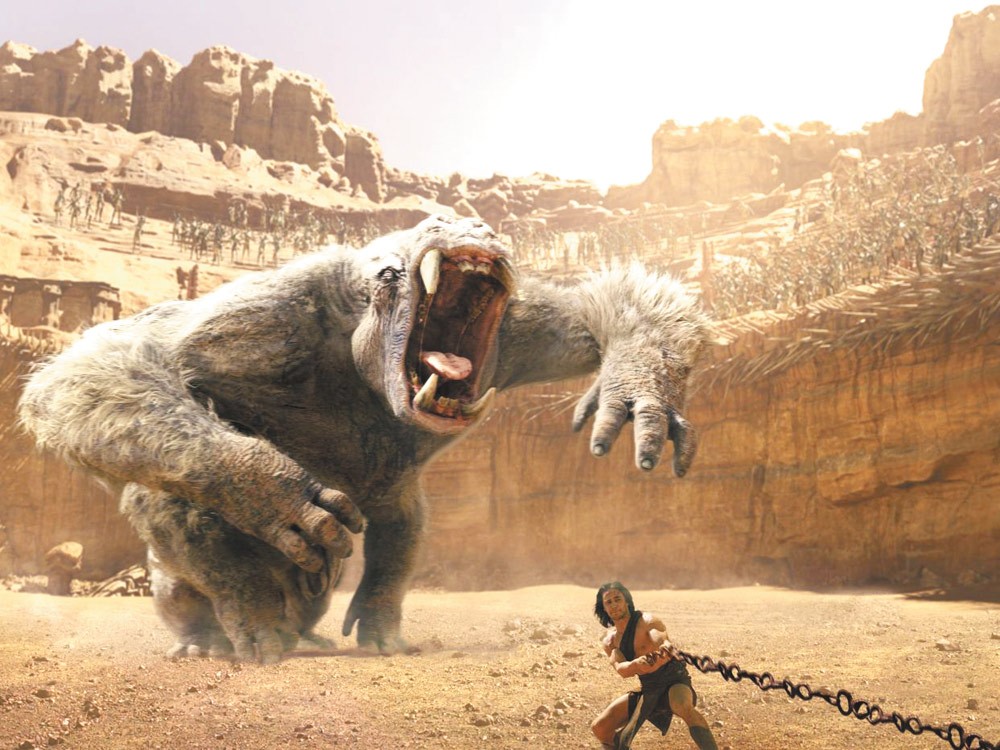 But it\'s really about the feelings.

The best things about John Carter lie underneath the spaceships, monsters, huge battles and Avatar-level 3D. It’s a funny film, due to both snark and pratfall gags. It’s romantic. It has the coolest dog (or whatever it is that passes for a dog on Mars), who’s very fast, very ugly, and has a big blue slobbering tongue.

Based on the trilogy of Mars-based science-fiction novels by Edgar Rice Burroughs (who also created Tarzan), this is the adventure told in the first book, A Princess of Mars, about former Confederate Army officer John Carter. In the book, he was a prospector searching for gold in the Old West. He’s that here, too, though now also a cocky troublemaker who’s looking out only for himself. He finds his legendary cave of gold, where (wouldn’t you know it?) a strangely dressed bald guy from another world has been hiding. There’s a blinding flash of blue light, then Carter wakes up in the middle of a desert — on Mars or, as it’s known locally, Barsoom.

Carter’s strength and agility are increased because of the planet’s low gravity. On the downside, he just got out of a civil war on earth and he plops down in the middle of another — thousand-year-old — one on Mars.

Scantily clad and tough-as-nails Princess Dejah (Lynn Collins from X-Men Origins: Wolverine) has been told by her dad (Ciaran Hinds) that the only way to save their city of Helium is for her to marry Sab Than (Dominic West), the vile leader of the Zordangans. But when she meets handsome Captain Carter, she has hopes of finding a way out of that marriage.

There are lots of complications, but it’s all neatly told by Andrew Stanton, who directed the Pixar gems Finding Nemo and WALL-E, and makes his live-action debut here. Stanton gives us a spectacular epic, kicking off with a battle sequence with gladiator-like pirates duking it out in elegant airships, then mixing in tidbits of political intrigue, shape-shifting villains, and even a brief but heartbreaking flashback that reveals what turned the once-happy Carter into a sad, angry loner.

A visual treat from beginning to end, John Carter wisely uses dedicated 3D cameras to focus on depth and massive scope, especially in the battle scenes, even as the script goes out of its way to take an anti-war stance.