Jousting by Fist and Mallet

The unlikely marriage this weekend of boxing and polo 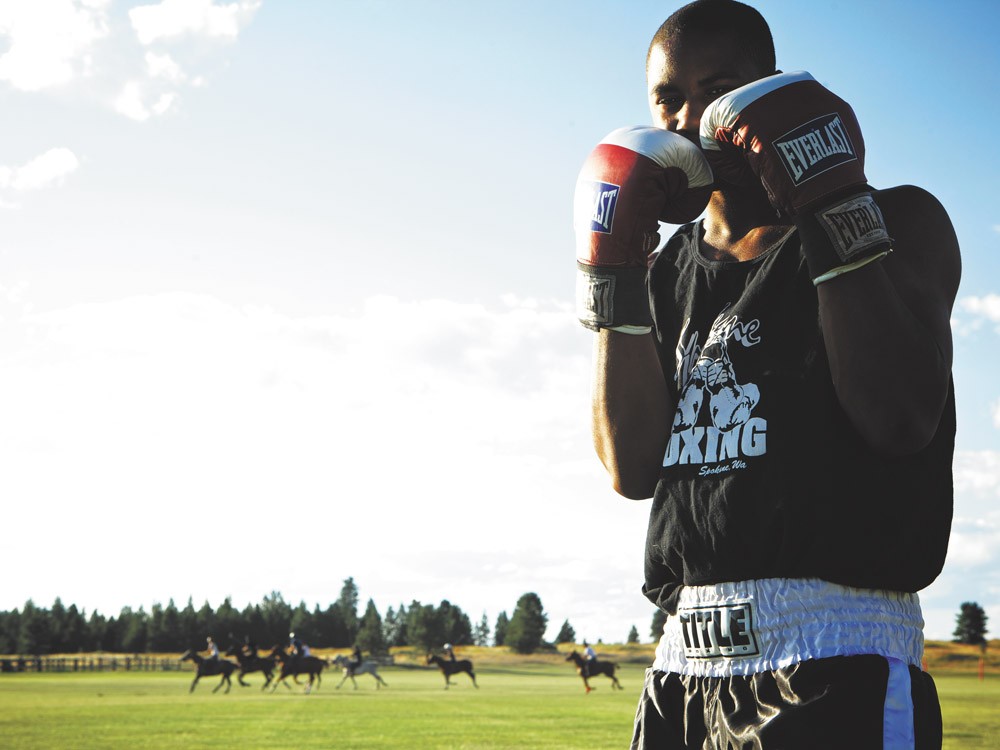 Ben Tobin
Thomas Allenton is one of the fighters taking to the ring on Saturday.
John Babin boxed in college and it shares some similarities with the sport he plays today.

“My last boxing experience ended up with a feminine hygiene product up each nostril,” Babin, 40, says.

“It was instructive,” Babin recalls with a laugh.

But polo, which Babin took up in his 30s, has been much more punishing. He’s broken six ribs, an arm and a hand. Still, it doesn’t stop him.

“When you break the hand, you just have [the doctor] make the cast [to hold] the reins so you can still play,” he says.

Ask him why it’s worth it, and Babin smiles.

“It’s fast, it’s loud, it’s old, there’s a lot of ritual and kind of tradition that goes with it,” he says. “And the horses are magnificent.”

Babin talks as he stands with another polo player, Chuck Johnson, on the grounds of the Spokane Polo Club in Airway Heights, a vast green space that lies underneath the thrum of air tankers lumbering down to Fairchild Air Force Base. He’s describing his latest venture, one that will bring together under a twilight August sky the sport of his past with the sport of his present.

Called Fights at the Fields, Babin, along with Spokane Boxing Club’s Rick Welliver, have organized a night of open-air boxing fights preceded by a polo game. They hope to raise money for young fighters and introduce an audience to two old sports.

But can they draw interest for a pair of sports that have long faded from the public consciousness?

“You can debate what the oldest profession is, prostitution or pugilism,” Welliver says. “We’re just prostitutes for pain.”

Boxing is thought to have originated in Africa around 4000 B.C. It became popular in ancient Greece and Rome, where fighters — thought by historians to be law-breakers and slaves — wrapped leather around their hands and beat each other to death.

Polo, a sport in which players mounted on horses try to score goals by hitting a ball with a mallet, came by way of the Persian Empire and then spread south into India, where British colonialists brought it back to Britain in the 1800s.

Both sports have seen better days. In 20th century America, boxing was not only hugely popular — the sport became a battleground for racial equality a chance to square off against foreign enemies. And in the early 1900s, World War I hero Tommy Hitchcock helped draw huge audiences to polo. F. Scott Fitzgerald even used him as an inspiration for Tom Buchanan in The Great Gatsby.

But with $12.50 general admission tickets, Babin and Welliver, the boxing club owner, hope to draw a more common crowd than jazz age hobnobbers.

“Maybe this event could be kind of an image breaker,” Welliver says. “Some people think polo players are sort of high-brow.”

That image breaking could use to go both ways. Welliver’s gym in East Central, an open space full of heavy bags hanging from the ceiling and mirrors on the wall for shadowboxing, hosts law students, pharmaceutical representatives, government workers and occasionally even this reporter.

Despite the shared gluttonies for pain, the class perceptions remain. Welliver and Babin had a back-and-forth over whether to have to have VIP seating. Babin is an investment banker who owns nine horses. Welliver, who was raised in Hillyard, works with at-risk kids at the boxing club. They decided to go for it, with 15 percent of the revenue going to help train young boxers.

“For these kids to get sponsored, you got to get in front of money,” Babin says “And there are people that are willing to throw money to kids that are working hard. But you got to introduce the two.”