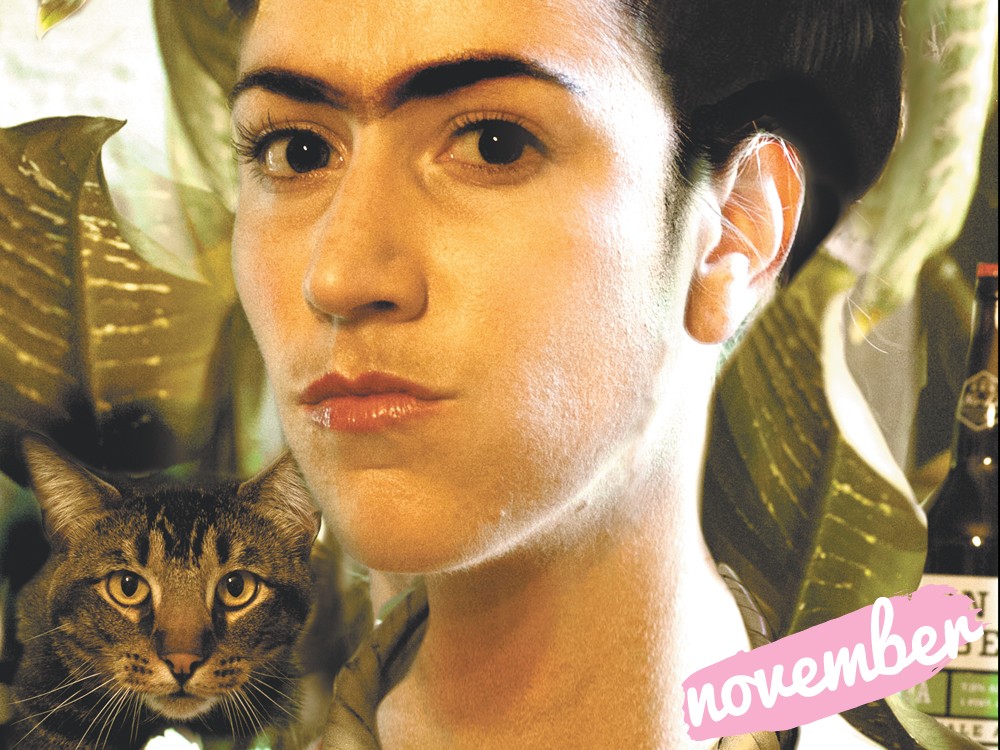 The Toadies and Helmet | Nov. 1
Music

Way back when MTV was pushing alternative rock, bands like Helmet and the Toadies were the toast of the music industry. Helmet brought a heavier, metal-tinged sound to the table, and the Texas-bred Toadies gained a following with their creepy-but-catchy songs of stalking and kidnapping other people. Though Helmet suffered over the years from a rotating cast of members and a continually changing sound, the Toadies — despite a long hiatus — held onto their Texas fans with their Dia de los Toadies festival and continual radio rotation of songs like “Tyler” and “Possum Kingdom.” With these two giant bands on the A Club stage, this show is going to be packed, sweaty, undeniably nostalgic and probably fun as hell. (LS) A Club, $18, 7 pm

A tiny little film fest in the big little town of Sandpoint focusing on films less than 20 minutes in length and no more profane than would earn a PG-13 rating. The blocks run about two hours each and the films tend to range from two minutes to the limit, so that five bucks you’re paying is going to fetch you as many as a dozen films. And if you’re a filmmaker, you have until Sept. 30 to enter. New this year is an Idaho Filmmaker Award to go along with the usual First, Second, Third place and Audience Choice awards you Sandpointers have come to expect. (LB) The Panida Theater, Block 1: Free; Block 2 and 3 $5, 1 pm, 4 pm and 7 pm

The horror stories you have heard about Lutefisk — cod soaked in lye — are entirely fabricated. Or entirely correct. Depending on which Norwegian you talk to. It’s an ancient preparation that dates to that strange, forgotten time before we had freezer trucks and refrigeration, when people had to actually preserve the food they caught for lean seasons (this is also, of course, from back when people still caught food). It’s a complicated process of soaking whitefish (usually cod) in cold water for several days then soaking it in a lye/water brine for a couple more until half its protein turns to jelly. It’s soaked in water again for another few days and at the end, it’s ready to cook and eat; or, like, store for 40 years. Go partake in a 105-year-old Spokane tradition. You kinda owe it to yourself. (LB) Sons of Norway, 1 pm

Easily the premier food event of the year, Epicurean Delight is a black-tie-ish (as black tie as Spokane gets, let’s be serious) fundraiser for the Inland Northwest Blood Center that packs out the new convention center. It’s a night of free-flowing wine and beer as dozens of restaurants fix small-plate versions of signature dishes for guests and judges, who rate the dishes and declare winners for appetizers, entrees and desserts. There’s a lounge area made of carved ice and a bunch of pretty awesome prizes if you’re into the whole raffle thing. Dinner concludes, there’s a short entreaty to donate blood, then people, well-fed and generally half-soused, take to the dance floor. (LB) Convention Center, $150, 6 pm

Perhaps one of the coolest American kids shows since Sesame Street, Yo Gabba Gabba! has caught the attention spans of both parents and kiddos with its furry hat wearing host, lovable alien-like characters and string of famous guest stars (everyone from Weezer to Elijah Wood). The YGG! crew collides onstage with the cast of The Fresh Beat Band — a more modern version of Kids Incorporated — and takes the whole crew everywhere from the Wild West to the bottom of the ocean and the furthest reaches of outer space. And, of course, they’ll sing and dance along the way. (LS) INB Performing Arts Center, $25-$40, 6:30 pm

While children of the 1960s probably recall the Beatles songs that dominated the radio waves back then, children of the 1980s are equally programmed to remember music that played as Mario and Luigi stomped snaggle-toothed mushrooms, and as Link battled the evil Ganon to rescue Princess Zelda. The Spokane Symphony recognizes the nostalgia behind the bleeps and bloops of video game music, and is putting on an entire show revolving around those songs. To those of you contemplating wearing your Princess Peach Halloween costume: yes. Wear it. We’re hoping this is the weirdest symphony event to date. (LS) Fox Theater, $25-$37, 8 pm

A “folk festival” these days can mean anything from a pop music spectacular to a show of Americana tradition, and the Spokane festival certainly leans toward the latter. The Fall Folk Festival aims to celebrate the diverse cultures and ethnic traditions in our region with music, dance, art and other forms of traditional folk expression. Last year, more than 6,500 people attended the two-day event, which features eight different stages that host more than 100 different acts, including Celtic, African, Asian and Middle Eastern performers, just to list a few. Bring the kids — there’s plenty of youth-focused events. (MB) Spokane Community College, Free, 11 am-10 pm Saturday, 11 am-5 pm Sunday

Since 1972, the Acting Company has served as one of the premier touring theater groups in the United States, entertaining audiences in 48 states and even putting on shows in 10 foreign countries. There’s no doubt that these people know what they're doing. Come November, they are stopping by The Fox to showcase their latest production of Of Mice and Men. Fans of the legendary novel by author John Steinbeck, as well as theater purists, will appreciate the talented performances of the cast as they beautifully tell the story of two drifters during the Great Depression. (KS) The Fox Theater, $25-$35, 7:30 pm

It was long ago that watching Disney’s entire vault of animated princess fairytales become an unofficial childhood rite of passage for little girls (and boys, too). Now, Disney’s versions of its iconic princesses are just about everywhere, including ice rinks across America this fall and winter. The latest installment of Disney on Ice features one of the franchise’s most beloved princesses, Cinderella, and two of its newest: Tiana, from 2009’s The Princess and the Frog, and Rapunzel, of 2010’s Tangled, in a musical celebration of all things girly and pretty. Disney princess lovers across the Inland Northwest undoubtedly will be captivated when their favorite characters take to the Spokane Arena’s ice in a spectacle of sparkling costumes and song. (CS) Spokane Arena, $18-$55.

David Sedaris is a foul-mouthed national treasure whose crisply sardonic books of stories and essays are national bestsellers pretty much before they go to print. He’s a compelling reader, too, and his shows here the last few years have been riotous. Sedaris doesn’t have a book to hock, which means he’ll probably be reading a selection of greatest hits and unpublished work. He uses off-book years to perform and then edit new work based on the reactions of the audience. Consensus at his reading a couple years ago was that the animal-related fables he was reading didn’t really hit the chord of his other work. When Squirrel Seeks Chipmunk came out, the reviews agreed. It’s a nice way to get insight into his process and an early insight into his latest work. Let’s just hope he’s back to his wheelhouse: bawdy, awkward essays about his family. (LB) The Fox, $38-48, 7:30 pm

The expansive grounds of Northern Quest Casino never stop hosting live music, and this fall’s slate of shows includes an appearance by guitar-rocking badass Boz Scaggs. Originally coming to prominence as a member of the Steve Miller Band, Scaggs spent the 1970s releasing one smash solo album after another, including Silk Degrees, which remains part of the classic rock-and-roll cannon. Scaggs hasn’t slowed down in recent years and even at 68, he continues to tour, rocking the faces off of old-time fans and younger generations alike. (MB) Northern Quest Resort & Casino, $45-$65, 7:30 pm

For one weekend in November, craft lovers from all over the Inland Northwest flock to the Spokane County Fairgrounds to get their holiday arts and craft fix. Three hundred vendors pack the Expo Center’s floor, hawking everything from handmade jewelry and fine art, to gourmet food, whimsical holiday-themed decor items and more. No matter which day you go, be prepared for a crowd because this annual event — now in its 36th year — is a longtime local favorite. You’re bound to find at least something you just have to have to make your home a little more festive and cozy this winter. For those who have hard-to-buy-for friends and family, this just might be the place to find the perfect gift. (CS) Spokane County Fair & Expo Center, $7, Fri. 10 am-9 pm, Sat. 9 am-7 pm, Sun. 10 am-5 pm

Back when the American West was still raw and undeveloped, the eastern side of the country became increasingly fascinated with the “wild” territory and its Native Americans, with their lifestyle rooted in nature. Capitalizing on this obsession, “Buffalo Bill” Cody created a touring circus-like show featuring theatrical performances, sideshows and reenactments of soldiers vs. Indian battles. During an 1898 stop in New York, influential photographer Gertrude Käsebier went to Cody’s show and became sympathetic with the natives who were exploited for entertainment. She then spent the next decade documenting their stories in photographs. Sixty of Käsebier’s original images of the Buffalo Bill Native Americans will be on display at the MAC through this fall and winter. Northwest Museum of Arts & Culture, $5-$7, Wed.-Sat. 10 am-5 pm

See, originally Alice Cooper was a band — not a guy. But over the past 40 years, Alice Cooper became the pseudonym of the band’s chameleon-like, death-obsessed singer. In fact, some even would argue that the man Alice Cooper — a big fan of spooky face paint, skeletons and over the top stage shows — is responsible for forming heavy metal into its dark, brooding self; even though a lot of his music is more rock than metal. He’s produced massive hits over the years: “Poison,” “School’s Out,” “No More Mr. Nice Guy” and, of course, the hilarious “Feed My Frankenstein.” Guaranteed this show will be anchored by all those songs, and tons of pyrotechnics. (LS) Northern Quest Casino, $50-$60, 7 pm

When producer and composer Paul O’Neill created Trans-Siberian Orchestra in 1993, his goal was to push the boundaries of progressive metal music. Inadvertently, he also made holiday music cool again. Over the years, the band has released quite a few rock operas, including its Christmas trilogy (Christmas Eve and Other Stories, The Christmas Attic and The Lost Christmas Eve) which will be performed in its entirety. Combining multiple vocalists with a string section, light shows, video screens, special effects and pyrotechnics synchronized to music, TSO has created a show that truly rings in the holiday spirit, one headbang at a time. (AP) Spokane Arena, $30.50-$60.50, 8 pm

What’s cooler than dancing to electronic music while watching a light show and being splattered with paint? Apparently nothing, because Dayglow’s paint parties have been going strong since 2006. Partygoers (sorry kids, you have to be at least 18) are encouraged to wear white for Dayglow’s 2012 show, “The E.N.D.,” which stands for, “Electronic Never Dies.” As Dayglow DJ David Solano plays all of your electronic favorites, LED screens create colorful visual effects while paint cannons make like a sick unicorn and spew colored paint on both attendees and performers, who will be interacting with partygoers from the stage and in the crowd. Hey, don’t knock it ‘til you try it. (AP) Spokane Arena, $30-$70, 8 pm