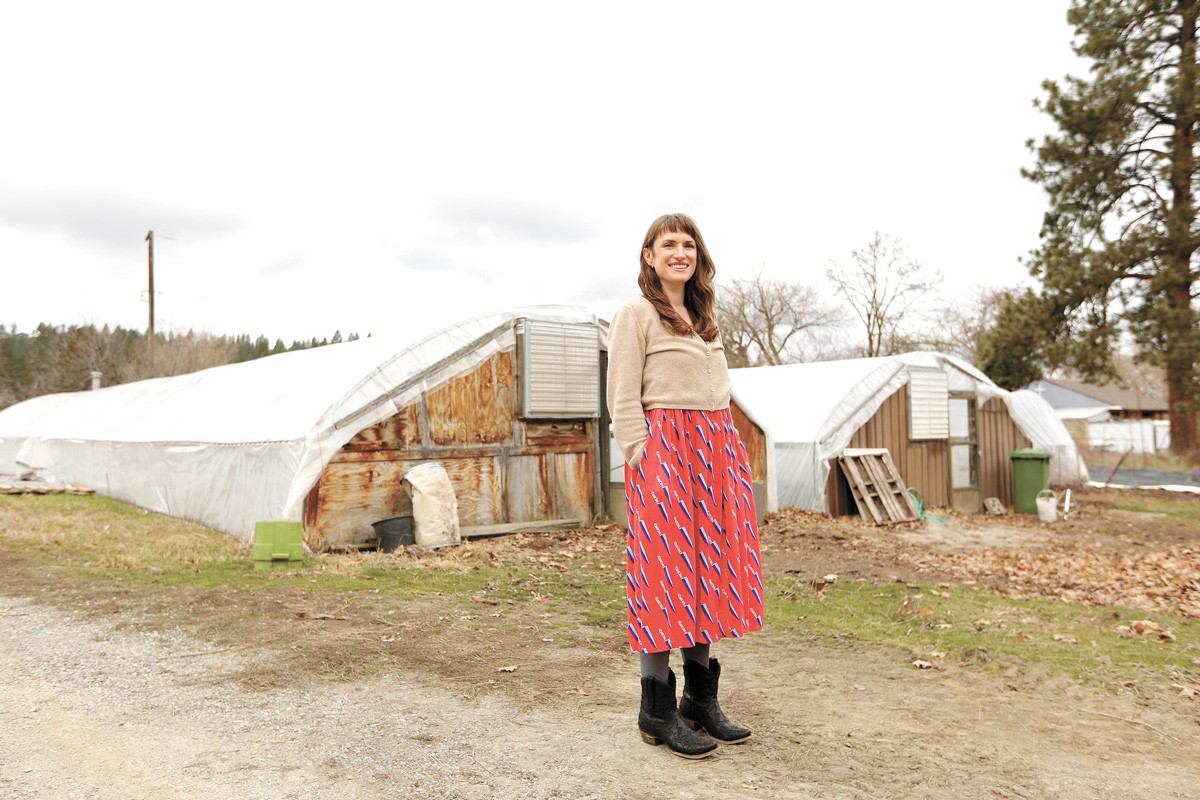 It's a testament to Kate Lebo's curiosity, knowledge and sheer writing chops that she can spend a chapter describing something as tasting "like peaches laced with onions and garbage" and smelling "a little like turpentine" and you'll want to merrily try some for yourself — laughing all the way.

Of course, you probably won't get the 38-year-old Lebo to join for another round of the spikey fruit called a durian, grown primarily in Southeast Asia and only found through some digging through Spokane's Asian grocery stores. The author of The Book of Difficult Fruit: Arguments for the Tart, Tender, and Unruly (With Recipes), arriving in stores April 6, readily admits she threw out most of hers, having tried just five bites before she started to feel ill. Some people do have a taste for the durian, though, and you'll find a recipe for durian ice cream at the end of that chapter, even if Lebo never intends to eat the stuff that caused her husband and fellow author Sam Ligon to proclaim, "That smells like A-S-S."

The difficult fruit in Lebo's title doesn't mean just fruit that's literally hard to keep down (durian is an outlier there), but fruit that's challenging to work with, hard to find in stores, or rarely referenced in mainstream food writing and recipes. And this book, Lebo's third, isn't simply a guide to tackling dishes featuring those fruits (although it is partly that). Difficult Fruit is a remarkable combination of food writing, memoir, medical and natural history, and cultural anthropology that's unlike anything you've read before. And it's as welcoming for non-foodies as it is for those familiar with Lebo as the "pie lady" writer of A Commonplace Book of Pie and Pie School: Lessons in Fruit, Flour and Butter, or as co-founder with Ligon of the annual Pie & Whiskey bacchanal during Spokane's Get Lit! Festival.

The inspiration for tackling tricky fruits in her new book, Lebo says, as well as the tricky navigation of family history, romantic relationships, longtime friendships and medical challenges also in its pages, came from back when she was writing and promoting her old books, particularly the fruit-forward Pie School.

"I was having a good time on the food circuit, but I was also frustrated by kind of the limits of what was expected of me if I was just there to talk about pie," Lebo says. "I write poems, and I write personal essays, and have artistic pretensions as well. I think the phrase 'difficult fruit' started bopping around my head around the end of 2013."

She had some false starts while trying to find the right balance of all the things she wanted to address. She worked through putting some "terrible, terrible stuff" on the page to eventually find her way into a work that introduces readers to certain uncommon fruits (aronia, medlar), and reintroduces them to familiar ones (pomegranates, blackberries) in unexpected ways. It also delves into the fruits' histories in the natural world, their uses by medical practitioners and herbalists, and their culinary, cultural and spiritual roles in communities around the globe and close to the West Side transplant's Spokane home.

Taking a "food book" into all those areas in a compelling way is a high-wire act that Lebo performs with seeming ease and an inviting style. There are hilarious lines, and poignant reflections as well, and the style in which she approached her writing was in part designed to be the kind of food writing she wasn't seeing in the '00s and early '10s.

"Most of the food writing I was encountering just felt like it was really just peddling a vision of the good life," Lebo says. "It seemed really entwined with product promotion. It seemed like such an obvious way to attract a reader, because it's about food and we're all attracted to food and excited about food. And that seemed like such an opportunity to hold the reader's attention with less palatable subjects.

"The way I couched pitching Difficult Fruit was counter to the palatability that I saw as a problem in food writing. I think that food writing must be palatable, and part of our job is to get people to explore cuisine and show people why it's worth this much attention. But I think food writers can get caught in this trap of just stopping right there and maybe not looking at the complexities of those foods or those cuisines, or the communities that make them, or the histories that bring them all together."

Lebo's chapter on huckleberries is a good example. Obviously a favorite among Inland Northwesterners, Lebo naturally includes a recipe for a huckleberry pie at chapter's end, but before readers get there they'll learn about some misconceptions about them (a century ago they were thought to be "easily domesticated"), and the ethics and techniques of picking wild huckleberries. There's a reflection on their importance to Native peoples in the region, time spent with LaRae Wiley, founder of the Salish School, and a lesson about White "huckleberry camps" in the area in the early 20th century. There's a scene from a modern farmers market, a dive into where the berries got their name and how they became emblematic of the Wild West, and a look at what forest fires mean for the sweet little summer treats. The woman covers some serious ground.

"What drew me to the huckleberry besides the deep local love for it is the complete ignorance of what it is everywhere else," Lebo says. "Sam and I were having dinner at this fantastic restaurant in Omaha once, and they were serving like a steak with huckleberry sauce. And just for kicks I asked them, 'What's a huckleberry?' And they said, 'Oh, it's related to the blackberry.' Sam and I looked at each other and were like, 'Uh-huh. You have no idea.' But knowing that this is a fruit that is revered by the Native community here, by people who just arrived five years ago like me, by the descendants of White colonizers — we all think it's great. So how to write an essay that can contain the reverence of all those people, some of whom are still in conflict?"

That's what I mean by a high-wire act, and the fact Lebo can touch on so many aspects of a fruit in her chapters, organized alphabetically like a reference book, is a true feat. At no point does the writing feel dry or merely academic, and that's because Lebo puts so many personal touches throughout. She writes about her own kitchen failures, about her family and tackling dandelion issues in her yard. She takes readers back to her childhood, back to a cancer scare during the writing of this very book, back to the nursing home where her mother worked, and where a teenage Lebo worked for a summer, too. The memoir-ish passages weave throughout to make Difficult Fruit probably the most intensely personal "cookbook" imaginable.

Delving into her personal history and sensitive subjects came naturally, Lebo says, probably part of her "instinct" as a nonfiction writer and poet.

"I kept trying to create ways to feel like I was completely alone in the room with the essays," Lebo says. "I could say whatever unsayable thing and try to get to something that surprised and even scared me, if possible.

"Unintentionally, I told my family that I was writing a cookbook. That was probably, in some way, subconsciously intentional, if that's even possible. But it gave me some protection to just go and tell these stories I'm really not supposed to tell. My family members did get a chance to see the book while there was still time to make edits because it was important to me for them to feel like they had some control over the story as I'm telling it. They were really generous, and I think they understood this was just my version of it."

Inland Northwesterners will find themselves throughout Lebo's book, too, whether through seeing their own family travails through her stories, or literally seeing places she mentions in and around Spokane, the city she's called home since 2015. Difficult Fruit has a definite sense of place, despite its sprawling subjects.

"Thematically, that was important to me because this is a book about plants," Lebo says. "And it's also a book about how we are rooted, and how our roots connect. And the setting of the book, I wanted to feel rooted. And I also wanted the act of writing the book to help me root further into this particular place where I'm living right now, Spokane." ♦