A Better Way to Die Hard

Olympus Has Fallen shows what that other action franchise is missing 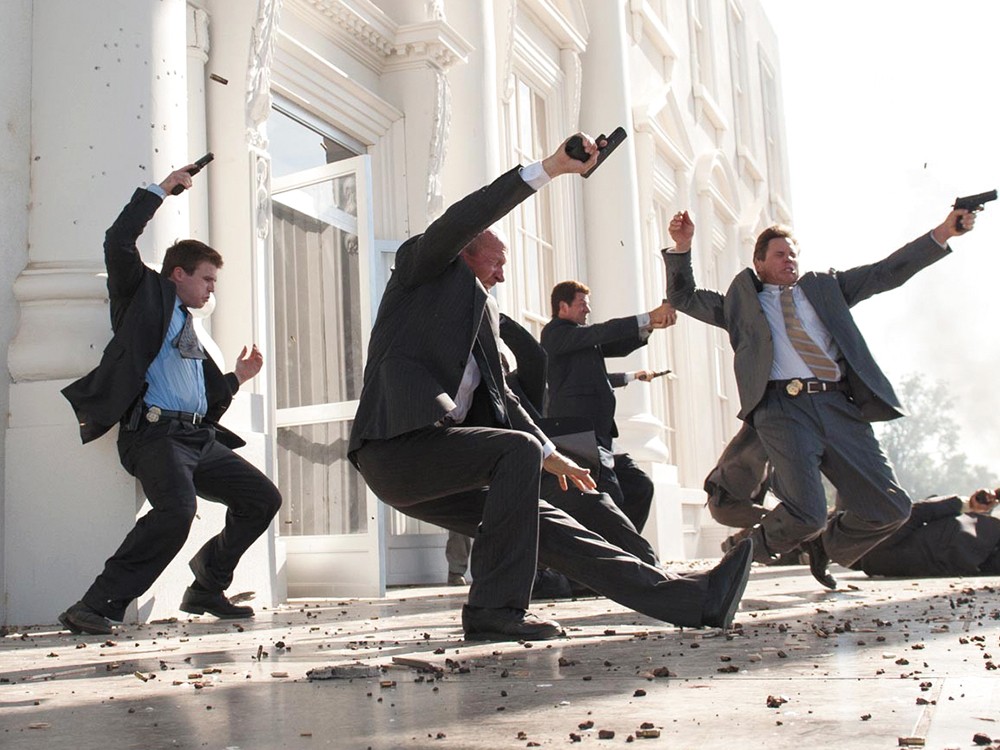 Now throw your hands in the air, and wave \'em like you just don\'t care.

Sure, I may be a film critic — but I’m also an American. I’ve got my pride in our nation’s accomplishments, and I don’t like seeing its institutions in peril. Which is why Olympus Has Fallen — about an assault by North Korean terrorists on the White House — had me muttering angrily to myself: “Why couldn’t this have been the latest Die Hard movie?”

Superficially, there’s a different kind of narrative at work in this action thriller. Our hero, Mike Banning (Gerard Butler), is a Secret Service agent — and, of course, totally badass ex-Special Forces — shipped from Presidential protection detail to a desk job after tragically failing to save the life of the First Lady. Eighteen months later, as tensions escalate in the DMZ, those nasty North Koreans — led by the ruthless Kang (Rick Yune) — storm 1600 Pennsylvania Avenue, ultimately taking the President (Aaron Eckhart) and several other top U.S. government officials hostage. Can Banning save the day when he becomes the lone surviving fly-in-the-ointment left inside the White House, even as the country faces potentially apocalyptic consequences?

There are more disaster-movie elements at play, and a personal quest for redemption that was never really part of the John McClane dynamic. Yet fundamentally, Olympus Has Fallen grasps all of the major components that make a Die Hard-type thriller appealing. Contained space? You got it — and it certainly makes things more interesting that the space is iconic. Hopelessly outmanned protagonist, slowly evening the odds through a combination of brute force and good old-fashioned American ingenuity? Well, maybe the balance is considerably shifted here toward the “brute force” part of that equation, but sure. A suitably nasty villain with a clearly defined objective? Decidedly well-played on that count.

But perhaps underappreciated in ticking off the “How to Make a Die Hard’ list is being smart about how and where to build your big action set pieces. The initial attack on the White House makes for a compelling combination of chaos and clear indication of the tactical planning involved; in order to grasp what the good guy is up against, the audience needs a keen understanding for how competent and well-equipped the bad guys are. Director Antoine Fuqua (Training Day) gives the violence a sense of real-world brutality, with civilians caught in the crossfire, and the combat feeling is earthy rather than aestheticized. And there’s a solid level of suspense beyond the action at key moments, particularly when Banning attempts to smuggle the President’s young son (Finley Jacobsen) to safety. This is how action movies become more than just cascades of bullets and showy explosions: pacing, editing and a sense of something being at stake.

Of course, this one does have Gerard Butler as its central figure which is … a problem. I’m on record as not remotely getting why Butler continues to happen, whether as a romantic lead or an action hero, though admittedly he’s less vexing as the latter than the former. The physicality he brings to Olympus Has Fallen certainly makes him a threat to the villains, but it also makes him seem like less of an everyday guy working his way through an extraordinary situation — the key factor in Bruce Willis’ performance as McClane that bumped the original Die Hard into the category of modern classic. More to the point, Butler continues to be about as uninteresting a leading man as we have in mainstream cinema, a guy who often seems to be thinking so hard about the accent he’s trying to pull off that he can’t give the words any meaning.

And yet Olympus Has Fallen clicks on most of the levels where you need genre moviemaking to click. It’s propulsively forward-moving in a way that minimizes your innate “wait, that’s stupid” reflex; it serves up a few memorable one-liners, even opting to put them in places where they make sense; it even cares about us enough for the final climactic showdown to include a big red digital countdown-to-armageddon” clock. This should have been the kind of movie we get for John McClane, maybe even the kind of movie we should get for any decent action hero. The fact that we so rarely do continues to be Hollywood’s fly in our ointment.