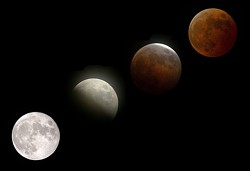 Four bludgeoned in hammer attack — A 31-year-old man is in custody after allegedly attacking four people in their home in Bayview. (CdA Press)

Move it on over — Fines for drivers who don't yield the road to emergency vehicles will double to $248 on Jan. 1. (KREM)

So gang rape is allowed? — King County says that the official-looking "Gang Rape is Strictly Prohibited" signs that have been popping up around local bus stations are the work of a prankster, not the county. (KXLY)