If your family had depended for generations on camas root, you’d be able to tell one type of nutritious “Indian celery” from another, too 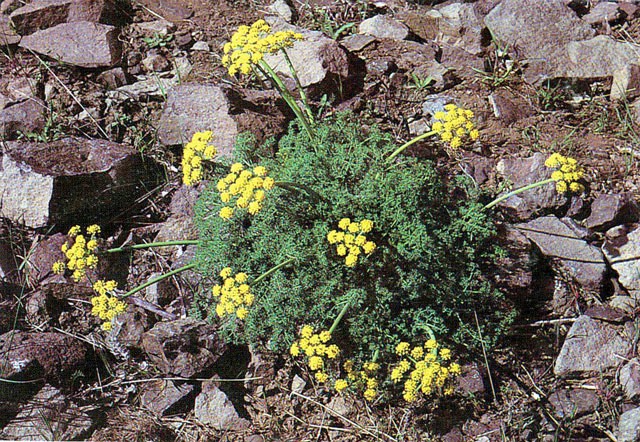 Each year, in late April or early May, when the white flowers of White Camas (Lomatium canbyi) have dried up and the seeds are beginning to toast in the sun, members of the Spokane Tribe slip away to certain rocky scablands to dig white camas and other roots.

It’s a ritual harvest performed for untold generations, and noticed in the spring of 1822 by Finan McDonald, who kept the journal for the Spokane House trading post, just downstream from the present city of Spokane. During much of April, tribal people had gathered along the river for an early fish run, but toward the end of the month they began to slip away.

These small bands were heading off to the open country of the Columbia Basin to gather the roots that would provide the majority of their carbohydrate calories for the year, with the tribes developing over time a remarkable amount of botanical expertise, seasonal timing, taste preferences and cooking methods among the tribes of the Columbia Plateau.

Two of the staple roots, blue camas lily and pink bitterroot, sport beautiful blooms and are known to many people from spring wildflower walks. The Lomatiums, a large group of less flashy flowers, though, show the true botanical prowess of the tribes.

There are around 40 different species of Lomatiums in the Plateau region, and professional plant taxonomists and wildflower experts find them bewilderingly difficult to identify.

Some types of Lomatium were traditionally used to make a tea or tonic for colds and sore throats.  The plants haven’t been studied extensively, but there is evidence that at least some varieties of the plant may have antiviral properties. One type of lomatium is reported to have helped a Nevada tribe prevent a single death during the flu pandemic of 1917-18.

Sahaptin-speaking bands of the southern Columbia Plateau and Salish speakers of the north Columbia country have long been able distinguish subtle differences between Lomatiums because they form an integral part of their lives, both past and present. Nez Perce people kept the Lewis and Clark Expedition alive with “cous” (Lomatium cous), pronounced “kows” and derived from the Nez Perce word for the root.

The University of Washington’s Eugene Hunn has interviewed elders on the Yakama Reservation who recognize up to 14 different species of Lomatiums. Sanpoil, Nespelem, Colville and Spokane groups continue to travel to the scablands each April to dig the roots of “white camas,” (Lomatium canbyi), and dry them on strings for winter consumption. Many Yakama people still get their first spring dose of vitamin C from Gray’s Desert Parsley (L. grayi) by clipping the fresh young sprouts just as they emerge from the ground. The taste of this “Indian celery” is refreshingly spicy and somewhat bitter, clearly distinct from at least four other species of Lomatium also referred to as “Indian celery” — the difference lies in where they live, soil types, weather conditions and simple taste preferences.

Lomatiums are perennial plants — that is, the rootstock persists to produce new shoots, stems, flowers and seeds each year. The roots of plants such as cous and white camas contain their highest levels of carbohydrates during their dormant period, so that is naturally when the tribes want to dig them. As the energy of the rootstock flows upward to the visible blooms, the tubers become “soft” and wrinkly like prunes; by that point, they don’t taste as good and lose much of their valuable nutrition.By tracking the progress of different sites through the spring, the tribes can make the rounds of digging at just the right time to get the most nutrition out of the roots. Each time a person digs a root, they snap off the top of the plant and replace it in the digging hole, thus ensuring the distribution of viable seed. In this way, favorite sites can be visited on a regular basis for years.

One day this spring, students from the Wellpinit School on the Spokane Reservation join in for one special day of gathering. People of all ages arrive carrying their favorite digging sticks and woven flat bags on their shoulders. Elders offer prayers to begin the work. Clumps of smaller children gather around to watch the learned skill of loosening the dirt and rocks just so, then leaning on the curved stick to pop a root out of the ground.

As they move through the sagebrush and antelope bitterbrush, across rocky mounds of patterned ground and escarpments of worn basalt, all the other elements of the Columbia Basin come into play. Several different kinds of sparrows hop up on bunchgrass tussocks to sing their songs. Harvester ants carry seeds across bare sand to their small conical mounds. A horned lizard puffs up at the shadow of a second-grader’s hand. Another student helps his mother with a particularly stubborn white camas that seems to be entwined with the root system of an ancient sagebrush. “This bush,” whispers the mother, “does not want to share with us.”

Some of the round roots that pop out of the ground are as large as ping-pong balls, but most look closer to the size of a thumb joint. Quick fingers peel off the first dirty layer of skin to reveal firm white flesh beneath. Some of the kids eat them raw, while others only nibble. Back at home, the roots are strung like popcorn on threads of Indian hemp, to be eaten over the winter.

Many people describe the texture then like that of popcorn, and say that the longer the white camas dries, the better it tastes. They are fondly looking forward to days when they can sit around and snack on the strung roots, each bite recalling the crisp delight of spring in the open country.