A powerful new book explores the ways the rest of the world delivers health care, and concludes the American system is immoral 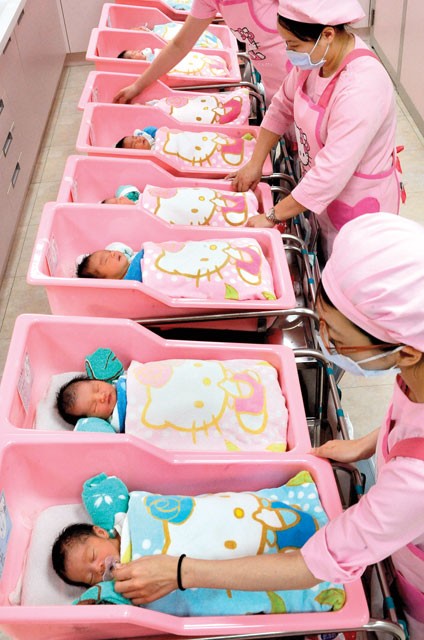 Sam Yeh photo/AFP/Getty Images
With one of world’s lowest infant mortality rates, the Japanese are among the planet’s healthiest people. And their health care costs are nearly a third the costs for Americans.

Meet Nikki White. She’s tall and athletic, grew up middle-class in Tennessee and graduated from the University of Texas, after which she went to work in an Austin bookstore.

Journalist T.R. Reid wants you to meet this unfortunate young woman while we discuss this sprawling mess of political confusion called “health care reform.” In fact, the thesis of his powerful new book, The Healing of America, is that we are not thinking clearly about how to fix our health care system. As it has usually been when America’s toughest challenges emerge, Reid sees it all as a simple moral question.

“Nikki didn’t die from lupus. Nikki died from complications of the failing American health care system,” Nikki’s doctor, Amylyn Crawford, told Reid through her own tears. “It was a lack of access to health care that killed Nikki White. If Nikki had not lost her health insurance, she’d be alive today.”

Pointing out that lupus is entirely treatable, Reid writes that, “Once she was sick, she couldn’t get health insurance. Like tens of millions of her fellow Americans, she had too much money to qualify for health care under welfare, but too little money to pay for the drugs and doctors she needed to stay alive. She spent the last months of her life frantically writing letters and filling out forms, pleading for help. When she died, Nikki White was 32 years old.”

Time for a New Ribbon?

Sadly — and, as Reid repeatedly argues, shockingly for the richest nation in the world — Nikki’s story, which was first told in a front-page Wall Street Journal article and on Frontline, is not unique. Even here in Spokane, where health insurance premiums are the highest in the nation (according to a 2006 study of 69 cities by eHealthInsurance), there are similar stories. On barackobama.com, people are sharing their health care horror stories; for Spokane alone, the list runs 50 pages. (Google “no health insurance stories spokane” to find the page.)

Beyond the anecdotes, there are numbers to back up the fact that Nikki White is not alone. A new study just published this fall by the American Journal of Public Health found that 44,000 Americans die each year from lack of insurance coverage that could have saved them from treatable diseases and health problems.

To understand how big a problem that is, consider breast cancer — a disease that can be treated and often cured. Last month was Breast Cancer Awareness Month, and you saw those pink ribbons everywhere, all month long. Far too many people have been touched by breast cancer, which is why such a potent public campaign has risen up. It’s been an impressive movement to watch grow, resulting in much greater awareness, earlier detection and better survival rates. Moms who might have died 20 years ago are raising their kids, holding a grandbaby in their arms and taking that post-retirement trip to Europe.

Consider this: While 40,000 American women die from breast cancer each year, 44,000 Americans die from lack of insurance.

So where’s their ribbon?

That’s the question Reid is asking. To nudge a movement to life with his book, he takes up the time-tested method that Harriet Beecher Stowe used in Uncle Tom’s Cabin to fight slavery — he’s putting a human face on the problem. Dissecting recent history, he blames Bill Clinton for making his case for health care reform about economics, not people — so that opponents of health care reform could turn it into a way to defeat Bill Clinton, not into something that could save the Nikki Whites of the world.

“By 1994,” Reid writes, “when the Clintons abandoned their plan, the central ethical argument for universal health care coverage — the notion that a wealthy country ought to provide medical treatment for all who need it — was nowhere to be heard.”

So this time around, Reid wants that moral argument to be a part of the discussion. And if those statistics on deaths aren’t bad enough, consider how many Americans go bankrupt each year because of medical bills — more than 700,000 Americans, according to a joint study of the Harvard Medical and Business schools.

“How many people [in other parts of the world] go bankrupt over medical bills?” Reid asks. “In Britain, zero. In France, zero. In Japan, Germany, the Netherlands, Canada, Switzerland, zero.

“This is a uniquely American problem,” he adds. “Those Americans who die or go broke because they happened to get sick represent a fundamental moral decision our country has made.”

So are we getting any kind of public benefit in return for these horrible human costs? Nope.

You are reading that correctly: We spend more than everyone else, we have fewer of our citizens covered, and we put up with a system that isn’t as effective as most others. Nothing about the current health care debate seems to add up. And that leads to the other powerful part of The Healing of America, when Reid takes his questions on the road to find out how other nations have solved these same problems. Citing Republican President Dwight Eisenhower’s love of comparative policy analysis, Reid visits England, Japan, France, Germany, Canada and even India. (See “Systems at a Glance,” starting on page 15.)

He finds that on both the moral question of healing all people who are sick and on the economic question of not bankrupting the treasury (or individual citizens), all the other developed countries are beating us. In fact, as the World Health Organization has found, America’s health care system ranks No. 37 in the world for its comparative efficiency — just behind Costa Rica. At least we’re two spots ahead of Cuba.

Reid, a former Washington Post bureau chief who has lived in London and Tokyo, has some pretty frank talk for those who smugly believe that America’s system doesn’t need reforming. “Sheer nonsense” is how he describes the charge that some European nations that have private doctors and private insurance companies (like Germany) are somehow practicing “socialized” medicine. And if socialized medicine is so bad, why do so many Americans love their Medicare coverage? (Medicare, as Reid points out, really is socialized medicine.)

Reid’s world tour is eye-opening, and his analysis is sobering: Not only are we failing to cover tens of millions of Americans, leaving them, potentially, to Nikki White’s fate, but our system is ridiculously expensive by any standard — we pay double what other nations are spending per person on health care.

The one innovation we seem to have over other systems is that ours is the only country where for-profit insurance companies are allowed to operate free of federal regulation. Even in Switzerland, the nation that perhaps most resembles our system, with lots of insurance companies that make quite a lot of profit, the government requires that they cover everyone, sick or healthy.

Reid finds a lot of expense built around profit and administrative costs in our system. While countries like France have 3 percent administrative expenses in their national insurance pools, United States’ insurers spend more like 20 percent on overhead. As a result, America spends 17 percent of its gross national product on health care costs; typical industrialized countries spend half that. If the United States could get that percentage down to even 10 percent, studies show we would save $600 billion a year.

That kind of economic argument for reform, of course, sounds a lot like what Bill Clinton was saying back in 1993 — that without reform, our nation will have to compete with the rest of the world while wearing a pair of cement boots. But that wasn’t enough then, and it doesn’t seem to be adding the kind of fierce urgency of now that any major legislation needs to pass.

There is a bill winding its way through Congress that includes efforts to impose some kinds of rules and cost controls on the system while preserving the current private, for-profit insurance model. Still, even that reform plan may leave millions without coverage.

Again, this debate over health care reform, like the one in the 1990s, seems more about politics — and stifling Barack Obama. It’s less concerned with people like Nikki White.

That’s why Reid’s book is so important at this moment. He offers solutions, via his reporting on health care system successes around the world. More important, by invoking the tragedy of Nikki White, he invites us all to consider the human toll of doing nothing about, as he puts it, “a health care system that discriminates on the basis of wealth.”

And most Americans are just one bad test result or one lost job away from having to beg for their lives before an insurance company that’s not required to do anything to help.

“If [Nikki White] had been a resident of any other developed nation, she could have lived a normal life span. No other rich country,” Reid writes, “would have tolerated the inequality that left Nikki White dead.”