The magnetic appeal of athletic jewelry 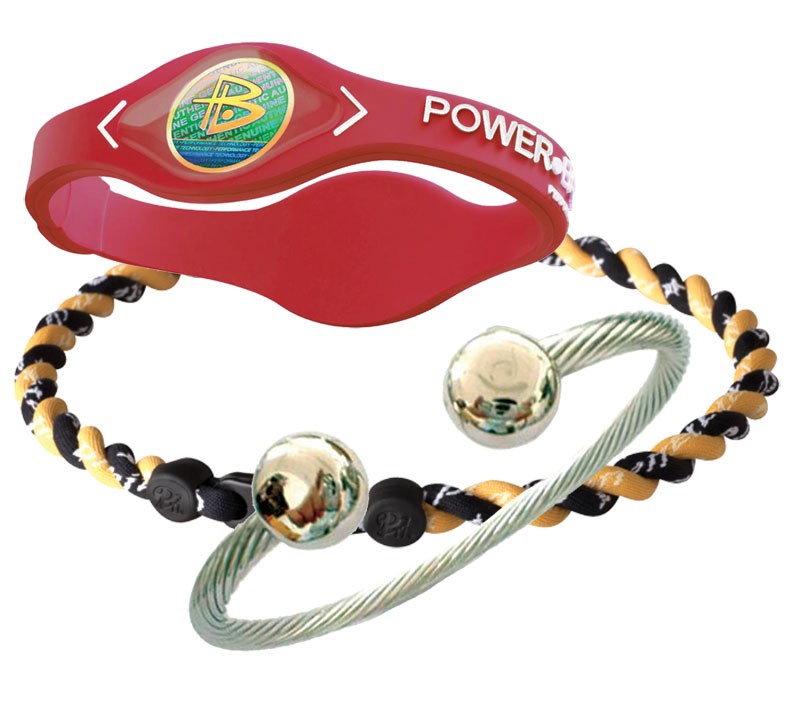 Power Balance is just one manufacturer in active sports fashion; Phiten makes necklaces that are infused with liquid titanium. But do they do anything more than look cool?

Spring is in the air, flowers are in bloom, baseball is back and so are aqua-titanium necklaces, ion wrist-bands and energyimparting holograms.

You may have noticed — and if you haven’t, you probably will now — that a lot of baseball players and other athletes wear necklaces and bracelets while they’re out there being athletes. The bracelets are nothing fancy: Most look like the simple lanyards used for key cards or reading glasses.

It’s not just pros from Major League Baseball, the NBA or the PGA. Local high school and college athletes are sporting these things, too.

Call them “functional jewelry.” Jewelry because, well, they are bracelets or necklaces. Functional because they supposedly impart balance or energy or good vibes to the wearer.

Silicone bracelets containing magnets and titanium manufactured by Sabona are touted as offering “magnetic therapy” which “may be beneficial by affecting the circulatory system.” The company notes that “magnets have been used in different cultures over the years” to promote good health.

Adidas offers an Ion Loop Bracelet made of silicone and magnets. WorldSoccerShop.com says the bracelets “will help balance ... bad vibes with negative ions.”

Power Balance sells silicone-neoprene bracelets that sport a thin “film hologram” designed to “mimic Eastern philosophies” to allow wearers to “maximize potential and live life to the fullest,” according to the company’s website.

Phiten makes a wide range of products — bracelets, necklaces, even bed sheets — “infused” with “liquid titanium.” The company’s website says “minute particles of titanium suspended in water” are “embedded into fabric, spreading the effect of Phiten technology to the users.” The effect, according to Phiten, is to “regulate and balance” the body’s flow of energy.

“We sell a lot of them,” Spokane Athletic owner Jeff Sweat says of Phiten’s products. The necklaces and bracelets — which cost in the $30 range — aren’t just popular with athletes, Sweat says. “I’ve got older customers who come in and they have equilibrium problems and they swear by it.”

A lot of professional athletes do, too. Of course, many of those wearers, like Seattle Seahawks quarterback Matt Hasselback, are endorsing the products in advertisements. And that could be why the bracelets and necklaces are seen on local ball fields and golf courses.

“It’s simply kids seeing what major leaguers wear and copying them,” says Jim Sharkey, baseball coach at Spokane’s Ferris High School. Sharkey is skeptical of the items’ worth. “The kids wear them as fashion and realize they don’t do anything to help physically.”

You won’t find any hard scientific claims made by any of the companies that sell the products. But the earnest anecdotal appeals from users, and vague assertions from the companies, might tickle one’s itch for gaining some kind of edge.

“If you believe it works for you, then by all means, if it isn’t dangerous, it’s reasonable,” says Dr. William T. Page of Orthopaedic Specialty Clinic of Spokane.

Page called it a fad. So did Gonzaga University’s Cody Martin. Martin, a senior pitcher for the Zags, says, “My uncle had some shoulder pain so he bought some ... and then my dad bought some for us. I tried it for my dad.”

Gonzaga’s baseball coach made it a team rule that the players can’t wear jewelry, including any of the products, on the field so Martin wore his bracelet in his pocket. Did he notice a difference? “Not too much. It could be a placebo, I’m not totally sure. I think it’s kind of like a fashion statement.”

Indeed, Phiten — which estimates that 400 major league players and 500 athletes from other sports wear their products — markets most of its bracelets and necklaces with team logos. However, the company also includes a “Hello Kitty” collection, possibly for those who shun sweat-inducing activities.

Spokane Athletic’s Sweat doesn’t wear his Phiten necklace for performance on the field. “I’m wearing one right now,” he says during an interview. “I have arthritis and one day I woke up and I was kind of sore. My wife said, ‘How come you’re not wearing your necklace?’ So, yeah, I think they work.” But, he adds, “It is kind of a fad because of the baseball players.”

Golfers may find the products in their favorite pro shop. “I tried it for about three months. I didn’t notice any difference,” says Dave Mallrie, assistant pro at Liberty Lake Golf Course. “A friend of mine said he did. He said he noticed it when he was going to sleep. He felt like it made him more calm. I think it’s personal.”

Martin, meanwhile, has given up on them. “Mine broke,” he says. “The magnets fell off and I just haven’t purchased another one because they’re, like, 30 or 35 bucks.”