Map provided to Spokane City Councilman Michael Cathcart
Avista provided maps and times of planned outages Tuesday to Spokane City Council, which member Michael Cathcart shared on his Facebook page. This map shows some of the "feeders" on the utility's electric distribution system which would expect one-hour (or more) outages during the hottest part of the day on Tuesday, when temperatures reached at least 111 degrees in Spokane.

As temperatures soared to 111 degrees in Spokane Tuesday afternoon, Avista was again shutting down electric service in one-hour bursts for some neighborhoods to avoid more catastrophic equipment failure.

The electric utility's Heather Rosentrater, senior vice president of energy delivery, answered some of the region's pressing questions about the blackouts at a press conference this afternoon: 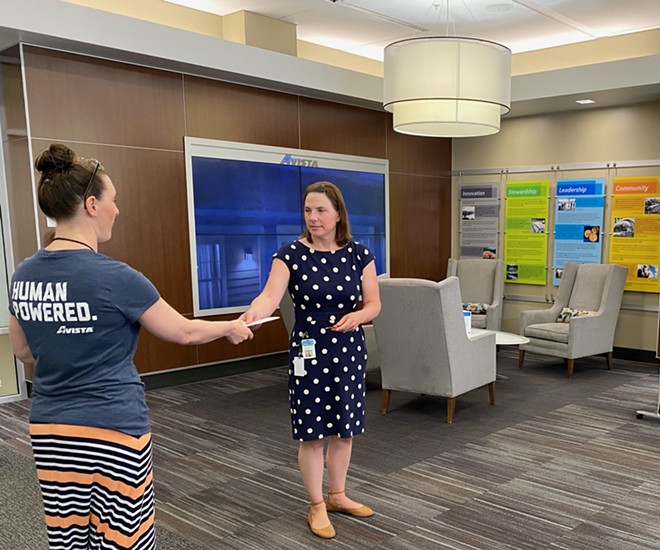 Why weren't customers notified Monday before their power went out?
Rosentrater says Avista did plan for this historic heat wave, which is shattering records around the Pacific Northwest. The utility usually factors in extra electricity to help in the event of any unexpected outages, but the issues on Monday weren't due to lack of supply.

The smaller scale distribution equipment in at least four parts of Spokane ended up setting off temperature alarms sooner than anticipated.

The equipment is rated to handle certain temperatures, but with the heat outside and the demand on the system rising so rapidly in some growing neighborhoods, Rosentrater says that the systems started setting off alarms before they even hit the level at which the equipment theoretically should be overheating.

The region was also on its way to set a record for the highest "peak" electricity load that the utility has ever seen, she says. Had power not been shut off due to those alarms, the usage would likely have been 100 to 200 megawatts higher than the previous peak of around 2,300 megawatts, Rosentrater says.

Why are the same neighborhoods being impacted today as on Monday? Why not spread out the burden?
Avista can't choose where these outages are occurring, Rosentrater says. Equipment specific to these neighborhoods is what has come close to failing.

Spokane is the main area being impacted in Avista's electricity distribution area, which covers large swaths of Eastern Washington and North Idaho.

Specifically, parts of northeast and northwest Spokane, parts of the city north near Fairwood and Five Mile, parts of the South Hill and some areas in Spokane Valley near Barker were expected to continue to see blackouts until the worst of the heat wave is over.

When are blackouts happening?
The power will be shut off ideally in only one-hour bursts during the hottest parts of the day, between noon and 8 pm. Avista plans to give those affected customers a break where they have electricity restored for at least an hour before another outage could impact them during that window.

"The heat causes issues with our equipment," Rosentrater says, explaining why the planned outages are happening during the hottest time of day. "When we are doing these smaller proactive outages, reducing that amount of load during the peak of the day allows the transformer to cool down so even when we bring that load back, it may be OK."

OK, so what exactly failed?
"You've heard terms like substations and distribution. The substations are the heart of our system. It's where we collect the energy from the generation."

Electricity goes from the substations to "feeder" systems to neighborhoods.

"Substations are the heart," Rosentrater says. "We have to protect them, because if they are damaged, that can cause significant issues for the neighborhoods that they serve, more long-term issues."

KXLY screenshot of Avista outage Map June 28
On Monday, major regions of Spokane experienced unexpected blackouts when Avista distribution equipment started overheating far sooner than the utility expected. It was shut down to avoid equipment failure, which could have resulted in even longer power outages, the utility explained.
Why were both poor and wealthier neighborhoods impacted?
Four transformers had issues Monday, and several feeder circuits that extend out from those to neighborhoods were impacted with outages Tuesday, Rosentrater says.

Two transformers were impacted Monday due to temperature alarms on aging equipment, and two had alarms after much higher demand than expected due to growth up north.

Why is this happening when it didn't happen in 2015's heat wave?
"The period of prolonged heat we're seeing is different than what we've experienced previously," Rosentrater says. "It's that combination of the really high temperatures as well as the growth. We all know the area is really growing."

Will these substations be updated soon to address these growth and age issues? Will there be issues in the winter?
"We do benefit in the winter based on the cold, it actually increases the rating of our equipment," Rosentrater says. "The winter has different challenges. But I will tell you yes, we are working on regularly re-forecasting based on new peaks, new trends about what temperatures we need to be planning for, as well as the growth on our entire system.

"I would say we always have that pledge," to update our systems, she says. "Our number one priority is having reliable, safe, affordable, sustainable energy for our customers. So that's something we contemplate every day when we're planning our systems."
© 2022 Inlander