THE WHOLE STORY?
As part of the roll out of their new album, Path of Wellness, Sleater-Kinney's Corin Tucker and Carrie Brownstein recorded a 90-minute Audible Original (Sleater-Kinney: One More Hour) discussing the band's history, their decade-long hiatus, their creative and personal evolutions, and the keys to finding passion in an artistic pursuit now a quarter-century old. There's a lot to love for fans of the band playing the FIC Aug. 5 with Wilco. But (and this is a big BUT), they utterly avoid the subject of their divisive last album (2019's The Center Won't Hold) save for a performance of "Can I Go On" from that release and the ensuing departure of longtime drummer Janet Weiss. Maybe it's too painful to talk about, or maybe they're just over it, but it's a pretty glaring omission in an otherwise worthwhile listen. Available free with a trial subscription. (DAN NAILEN) 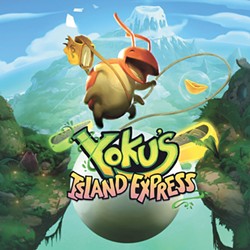 PINBALL WINNER
With literally thousands of titles to choose from, it can be easy to miss a great indie video game, as is the case with my recent discovery of the absolute hidden gem Yoku's Island Express. Released in 2018 on all major consoles and PC, the metroidvania-style adventure centers around the most adorable protagonist, Yoku the postmaster, a tiny red beetle who traverses an island world using a bouncy ball that allows him to be rocketed up and over obstacles via pinball paddles and bumpers. This combination of a platform adventurer with classic pinball mechanics is such a well-developed, fresh take. The game's difficulty (you never die) is forgiving, too, which makes the beautiful in-game scenery, quirky characters and creative platforming all the more enjoyable for players of any age. (CHEY SCOTT)

BOBBY GILLESPIE AND JEHNNY BETH, Utopian Ashes. The vocalists for Primal Scream and Savages swapping vocals for a whole album? Sign me up.

THE GO! TEAM, Get Up Sequences Part One. A soulful blast that screams "summer!" (DAN NAILEN)