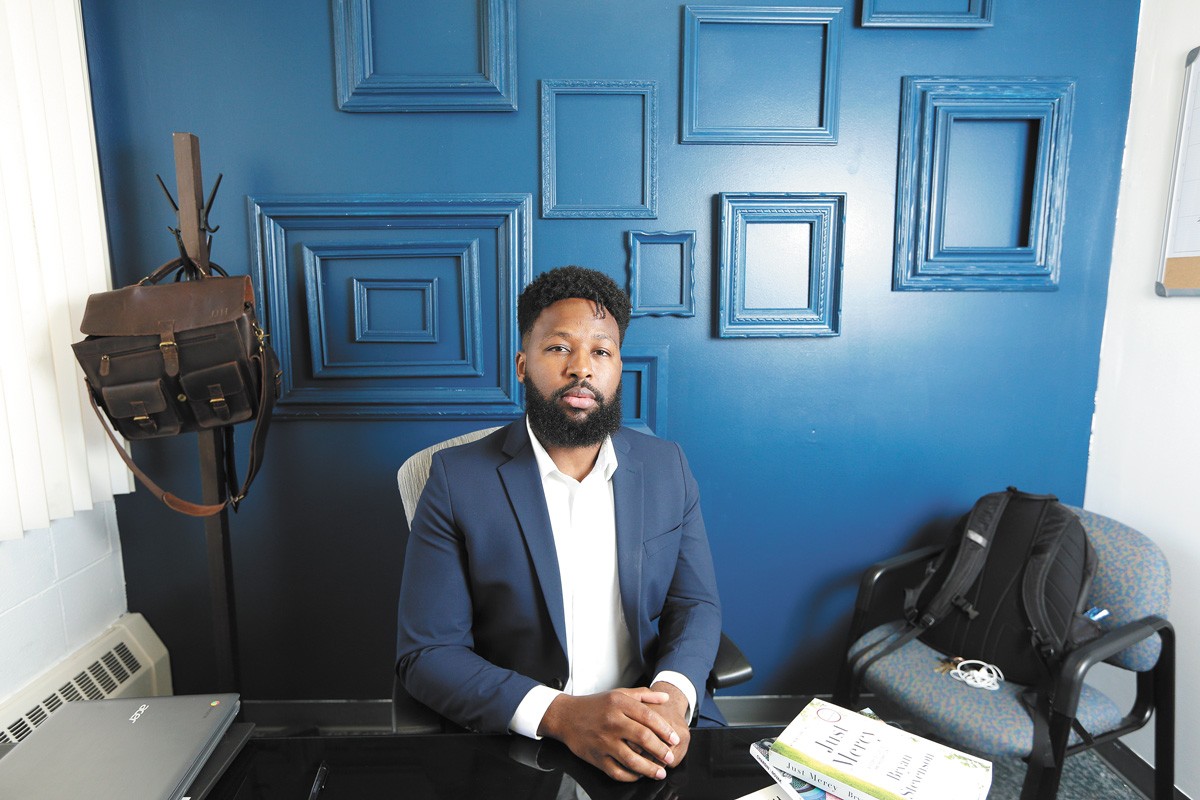 Less than a month into the job, Jerrall Haynes, a 26-year-old fresh off a stunning election victory, got his first taste of the challenge he'd often face as the only Black person on the school board.

It was December 2015, and the Spokane Public Schools Board of Directors was deciding the fate of a Black student, Quincy Marin, who was given a long-term suspension for allegedly threatening an administrator at Lewis and Clark High School.

Only Haynes took Marin's side.

"He definitely spoke against the energy of the room," Marin, now 24, tells the Inlander today. "It was kind of like an 'oh shit' moment — there's this Black guy advocating for another Black guy."

The board overruled Haynes and upheld the long-term suspension, arguing that even though Marin didn't intend to make a threat, his actions could be "perceived" as threatening, court records show. Later, after Marin appealed the decision in court, the district settled for $10,000.

Today, Haynes is the school board president leading what he says is the most diverse board in Spokane Public Schools history. In the past year and a half as president, he's navigated through a minefield of controversial decisions — when to reopen schools, where to put a new stadium, and how to redraw school boundaries, to name just a few. With the primary election approaching, he has decided not to seek another term.

Yet as he reflects on his tenure, Haynes keeps coming back to that day in 2015, when the district was in a "completely different place," he says. To this day, the Marin decision doesn't sit well with him.

"I learned a lot from that moment," Haynes tells the Inlander. "It helped me in understanding how to communicate effectively with my fellow board members and leadership in the district at that time, to achieve the right outcomes."

It was often an uphill battle, and early on he sometimes struggled to find his voice. But in the years since that day, Haynes has helped Spokane Public Schools transform how it disciplines students of color. Student arrests have plummeted. Rates of suspensions and expulsions have fallen. And in June, Superintendent Adam Swinyard said Black and multiracial students are no longer being disproportionately kicked out of school — a major accomplishment, even if school closures during the pandemic may have played a role.

Dan Ophardt, an attorney for TeamChild who represented Marin, says he doesn't believe "for a second" that the school board today would have defended a suspension like Marin's in 2015.

"The fact that Jerrall was the only vote against it back then shows he was ahead of his time," Ophardt says. "The fact that Quincy still remembers him as someone he could look to to listen to him shows you the person he is, and how he's been able to support a more inclusive district for students." 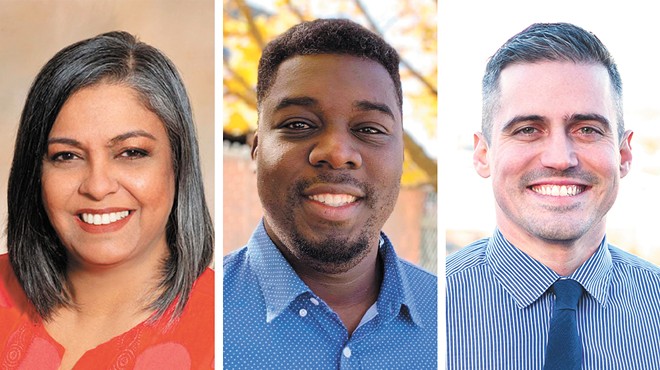 Haynes didn't grow up wanting to be a politician. But one school board member in Haynes' hometown in South Carolina left an impression on him. His name was Harry Blake, and he once visited Haynes' school in the sixth grade.

"He was this tall, handsome Black guy," Haynes says. "In some kind of roundabout way, I looked up to him and admired him. I didn't see too many people that look like me in positions like that throughout the rest of my life."

After high school, Haynes joined the Air Force, which brought him to Fairchild Air Force Base in 2010. At first, he struggled to find his place in the Inland Northwest, feeling truly alone for the first time ever. His mother and grandma encouraged him to go out and build relationships, build community, and give Spokane a chance. So he started coaching high school football, and he got involved with the NAACP.

When someone on the NAACP political action committee suggested he run for office, Haynes initially laughed it off. But then he saw there was a school board position up for election. He remembered when Blake visited his school in sixth grade.

He decided to go for it, and he eventually beat Rocky Treppiedi, who'd been on the board for nearly 20 years.

With Jerrall Haynes and Aryn Ziehnert declining to seek new terms, there are two open Spokane Public Schools Board of Directors seats. Here are candidates for each race in the August primary. The top two will advance to the general election.

Kata Dean, advocate for teens addicted to drugs and alcohol and victims of sexual abuse.

Sue Chapin, who served on the board with Haynes until 2019, says she immediately noticed that Haynes was wise beyond his years. He was the kind of guy who wouldn't speak up too much, but would command respect when he did.

"Coming to the board as young as he was when he started, he really rose to the task," Chapin says. "He just really is committed to what is right for kids."

It wasn't easy for Haynes at first. He was torn between pushing for change and leaning on more experienced board members like Chapin to show him the ropes. For Haynes, the hearing to decide whether Marin should remain suspended clarified the path forward. He saw what he considered an injustice, and he spoke up.

"It was interesting because I was given kudos by my fellow board members and school district leadership for being the lone 'no' vote, because they acknowledged how difficult that is," Haynes tells the Inlander. "And I was like 'What? I just don't agree.'"

Haynes says he was always very aware that most people in district leadership were White.

"When I looked around the room — and this is no offense to anyone else — I didn't see other people of color. I didn't see anybody else that had firsthand experience, or possibly the right perspective at times," Haynes says.

When the board in 2015 upheld Marin's suspension, it hit Haynes hard. From that, however, a superintendent leadership group on school discipline and disproportionality was created, he says.

Eventually, with community pressure, the district focused more on restorative practices that kept kids in school instead of kicking them out. Disproportionality by race in discipline numbers also began to go down.

"I had to learn how to communicate in an effective way to usher us into getting some of that work done, without it being strictly all about race, because I'm not sure if that necessarily resonated with everybody in that moment," Haynes says.

As other board members began to leave, Haynes became one of the most senior members. A bit reluctantly, Haynes accepted the role of board president in January 2020. Joining him on the board were newly elected members Nikki Lockwood and Jenny Slagle, both women of color.

"I'm in a position I never thought I'd be in," Haynes says. "When I joined, I'd never imagined that day."

But then, he says, "all hell broke loose."

None of that stalled Haynes' goals to improve schools. In fact, it may have accelerated efforts. Last June, Haynes and the school board passed a racial equity resolution. It was a promise to address systemic issues within the school district. It called for an end to student arrests, for an increase in workforce diversity and for an "equity lens" in budget decisions, among other things.

It's the kind of thing Haynes says wouldn't have been passed when he first was elected.

"Five years ago, our district was in a drastically different place, and we were just starting to do some very serious work that we're reaping some amazing benefits from now," Haynes says. "But I'm not sure that as an entire board we were ready then."

Living up to the equity resolution, however, has been its own challenge. The board took criticism this summer for approving new school boundaries that some experts argue will separate students by economic class and will represent a move away from equity.

The one disagreement she has with Haynes? The decision to build a new downtown stadium. In 2018, the board decided to build a new sports stadium at the site of Joe Albi Stadium in northwest Spokane following an advisory vote. Earlier this year, a new proposal asked the board to once again put the stadium downtown. This time, once the Public Facilities District had met the school district's terms, the board agreed to the downtown proposal.

It was a controversial decision, but Haynes said at the time it was a "step in the right direction to bring Spokane to a better place."

Haynes says he isn't afraid of controversy — as long as he's confident he's made the best choice for students.

"If I can always stand on that, that this is the best decision for students, I'm OK disappointing some adults," Haynes says.

Haynes won't seek re-election because he feels the district is ready for a transition.

"We've tackled just about every big major topic that you can in the last few years," he says. "I think I'm ready to start focusing on other ways I can serve my community."

He'd "possibly" be interested in another elected position, he says, but only if there's a strong desire in the community for him to run. Until his term ends, he's still focused on helping kids.

"I'm not going anywhere," Haynes says. "I think it's just time for new leaders to emerge."

Ophardt, for one, is confident others will be inspired by Haynes' leadership.

"His service to this community can't be overstated," Ophardt says. "And I have to expect that the immeasurable effects of the visibility of a Black man in his position in Spokane will be felt for generations." ♦