It’s cold! It’s windy! A few thousand people have been without power since last night. (S-R)

Gonzaga students attacked late at night by a man and woman wearing red hoodies with their faces painted like skeletons. (KHQ)

Coeur d’Alene Summer Theatre may live on after all, though in a smaller form. (Cda Press)

Tribal leaders have been asking the University of Washington to build a longhouse on campus for decades, and they finally broke ground on Friday. (Seattle Times)

An apartment fire in Wenatchee is being blamed on a dog that accidentally turned on the stove while reaching for treats. (AP)

Thomas Robinson of the Portland Trail Blazers got a speeding ticket for driving 107 mph on I-5. (Oregonian)

More than 60 people were killed in a series of blasts around Baghdad on Sunday, mostly targeted in Shiite areas. More than 600 people have been killed this month. (Al Jazeera English)

Five people are dead after a car crashed in Tiananmen Square and caught fire. (BBC)

Documents from the Edward Snowden leak seem to indicate the U.S. has been spying on the German chancellor, Angela Merkel, dating back to 2002. And since she’s supposed to be our friend, it’s kinda awkward. (NYT) 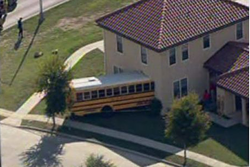 A school bus crashed into a home in Texas on Friday after the brakes went out — and that’s my cousin’s house! His family just moved in several weeks ago. His wife and two younger children were inside at the time, and the older two were among the elementary school students on the bus. They were all fine; five other people had minor injuries. (Houston Chronicle)