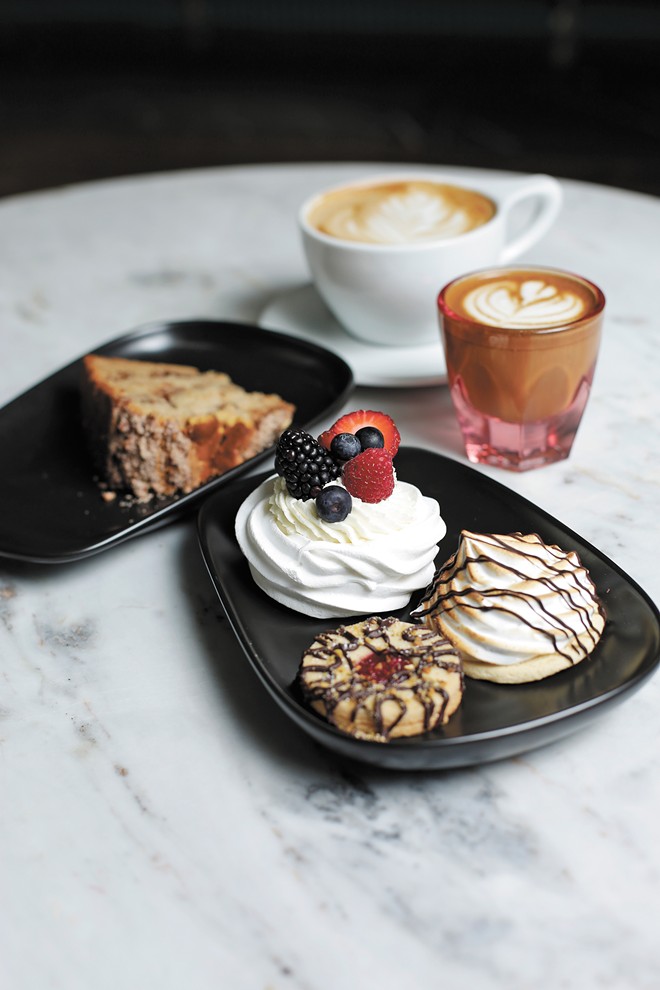 In one half of the corner space, a colorful retro vibe sets the tone for People's Waffle, which serves sweet and savory waffles from morning to mid-afternoon. Next door, meanwhile, gold-toned accents and plush, velvet furniture are set against a backdrop of emerald green walls for the swankier, 1920s, Euro-inspired setting of Emma Rue's cafe and cocktail bar.

Both eateries are newly opened in downtown Spokane, split between the former location of the Observatory bar and music venue, and are owned and operated by a trio of local entrepreneurs: Aaron Hein and Bryan and Alyssa Agee.

While People's Waffle opened for in-person dining earlier this spring, Emma Rue's debuted a few months later in late August as part of a phased rollout, largely due to pandemic-caused disruptions in construction and the global supply chain.

The owners' grand vision for Emma Rue's is an all-day coffee shop and cocktail bar specializing in house-made desserts, pastries and absinthe spirits, yet it's currently serving only espresso drinks and an abbreviated selection of gluten-free pastries.

"The bar is being built still, and will be done in the next couple weeks," Hein says. "Thanks to COVID and the challenges of everything, the timeline is shifting, but we will be fully open by the end of the year."

Emma Rue's espresso bar serves Portland-based roaster Coava Coffee as its "anchor" coffee, but owners also plan to have a regular rotation of featured roasters from across the Pacific Northwest and beyond.

"The goal is to introduce Spokane to something new, and feature roasters from outside Spokane for the most part, just to be able introduce people to something they've never tried before," Alyssa Agee says.

"Absinthe is going to be a huge piece of what we're doing in all our cocktails," Hein says. "We will have a beautiful absinthe fountain and a lot of options, and will teach people about all the classic ways to enjoy it. It's a really cool spirit, and is a huge flavor profile in French bars."

Emma Rue's spirits extend beyond absinthe; however, the bar won't have any beer taps, just cans and bottles, and the focus for its wine list is on French imports, including champagne.

While Emma Rue's opens early to offer coffee and pastries throughout the day, Hein and Agee envision it becoming an intimate late-night stop for the downtown crowd to enjoy a decadent dessert and cocktail once the full bar debuts.

"Our intention is to do this into the evening, so if you go to the Fox and want to go out and get some dessert afterwards, you can come over here — or maybe you want coffee and dessert," Hein says.

Emma Rue's has been a concept in the making for over a decade between Hein and the Agee couple.

"We've known what we wanted it to be like and the feel of it, and knew it would be about the people we're serving and we're staffing," Agee says. "And when this space became available, it was less about the perfect timing and expertise, and more about finding a place where this would work."

The Agee family, including Bryan's father Mark Agee, own the entire four-story, historic Symons Block building in which Emma Rue's and People's Waffle are located, and have plans to turn the upper stories into nontraditional offices, residences and a micro-hotel.

"We want to be invested and a real cultural influence to downtown," Agee notes. 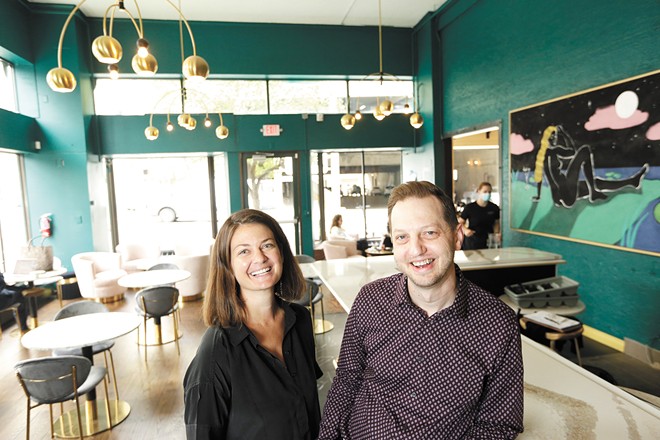 Although Emma Rue's and People's Waffle share a space and ownership, the businesses operate as separate entities, which means customers can't cross-order from both menus in one or the other eatery.

"We want different experiences, and what they each offer to stand alone," Hein says.

Even so, and since the seating inside People's Waffle is somewhat limited, on busy weekends customers are welcome to order coffee at Emma Rue's while they wait for a table. The waffle shop also offers its complete menu to-go via online ordering.

"I like to think of it more like what you see in some larger cities, where it's shared amenities but separate entities," Agee says. "Which I know is a little unique to Spokane, because even though the [restaurants] share a restroom and a kitchen, it doesn't extend much beyond that."

Sweeter waffles include strawberries and cream, lemon blueberry and the "Plain Jane" ($9) with only butter and syrup. Other breakfast staples ($3.50-$4.50) can be ordered on the side, including yogurt with granola, sausage, bacon, eggs, avocado and fruit salad. ♦