Local efforts to remove a statue in downtown Spokane that historians and activists say perpetuates harmful, racist stereotypes are steps closer to success. 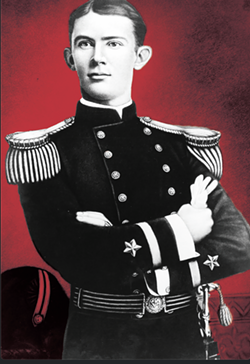 John R. Monaghan is the subject of a prominent Spokane statue that includes harmful and racist stereotypes of Pacific Islanders.
A Citizens' Advisory Council is hosting a community rally this Saturday to create more public awareness as to why the John R. Monaghan bronze statue, erected over a century ago, needs to go.

The 1906 monument commemorates the fallen young son of a wealthy, early Spokane family. John R. Monaghan was killed in 1899 while dispatched with the U.S. military to the Pacific Island nation of Samoa during a war waged by the U.S., Germany and Great Britain to overthrow Samoa's existing government. But, the highly visible statue — located on a traffic island outside the Spokane Club at Lincoln and Riverside — gets the facts all wrong.

"It’s a manifestation of ongoing harm. It represents historic and ongoing injury," explains Veta Schlimgen, an associate professor of history at Gonzaga University asked to serve on the advisory council to provide historical context.

"When [the statue] went up, it commemorated the death of a young community member, but why it was important to remember him is because he was 'murdered by savages,' and that language discriminates against and diminishes the personhood of Samoans," Schlimgen continues, referencing the wording and images on a bronze plaque at the base of the statue.

"And this is very consistent over 20th century and even into 21st, the reference of Samoans as savages," she says. "It’s continually a source of injury and hurt, and this is why we think the statue and its sentiment, they all need to go. We need to get rid of it so we can start to heal."

The community rally at Riverfront Park is set for Saturday, Oct. 16 at 11 am, and will include public statements, music and more. Those in the community who stand behind the call for the statue's removal can also sign an online petition.

Schlimgen says the advisory council, which also includes members of the region's Samoan, Native Hawaiian and Pacific Islander community alongside leaders in the arts, plan to present the Spokane City Council with an official request before the end of the year to have the Monaghan statue removed from public view.

Not everyone agrees with these efforts, however, arguing that removing the Monaghan statue (or other similar monuments) erases a part of history.

Action to get the statue taken down has locally been building momentum since last year, after a similar, successful initiative to rename a Spokane street bearing the name of Col. George Wright, who led a campaign of genocide against local Native tribes in the 1850s. Earlier this year, the road formerly known as Fort George Wright Drive in West Spokane was renamed Whistalks Way in honor of a Spokane Tribe woman warrior who resisted Wright's violence.

"There are community members who want the statue to stay where it is," Schlimgen says, adding that her stance on the statue's removal is also her own, and doesn't reflect that of Gonzaga University, which counts the Monaghan family's historic mansion as a campus-owned building.

"As far as we know, the [Monaghan] family hasn't said anything, but there are descendants of them who have expressed [opposition] publicly over removing the statue, because it talks about this wonderful person he was," she says.

"But that narrative focuses just on the individual and how he lived in Spokane, it doesn't look at his life as a soldier and what he was doing in Samoa. He was part of a raid into the Samoan Islands, where he was not just fighting against soldiers, but was also deployed to burn villages and tasked with committing violence against civilians."