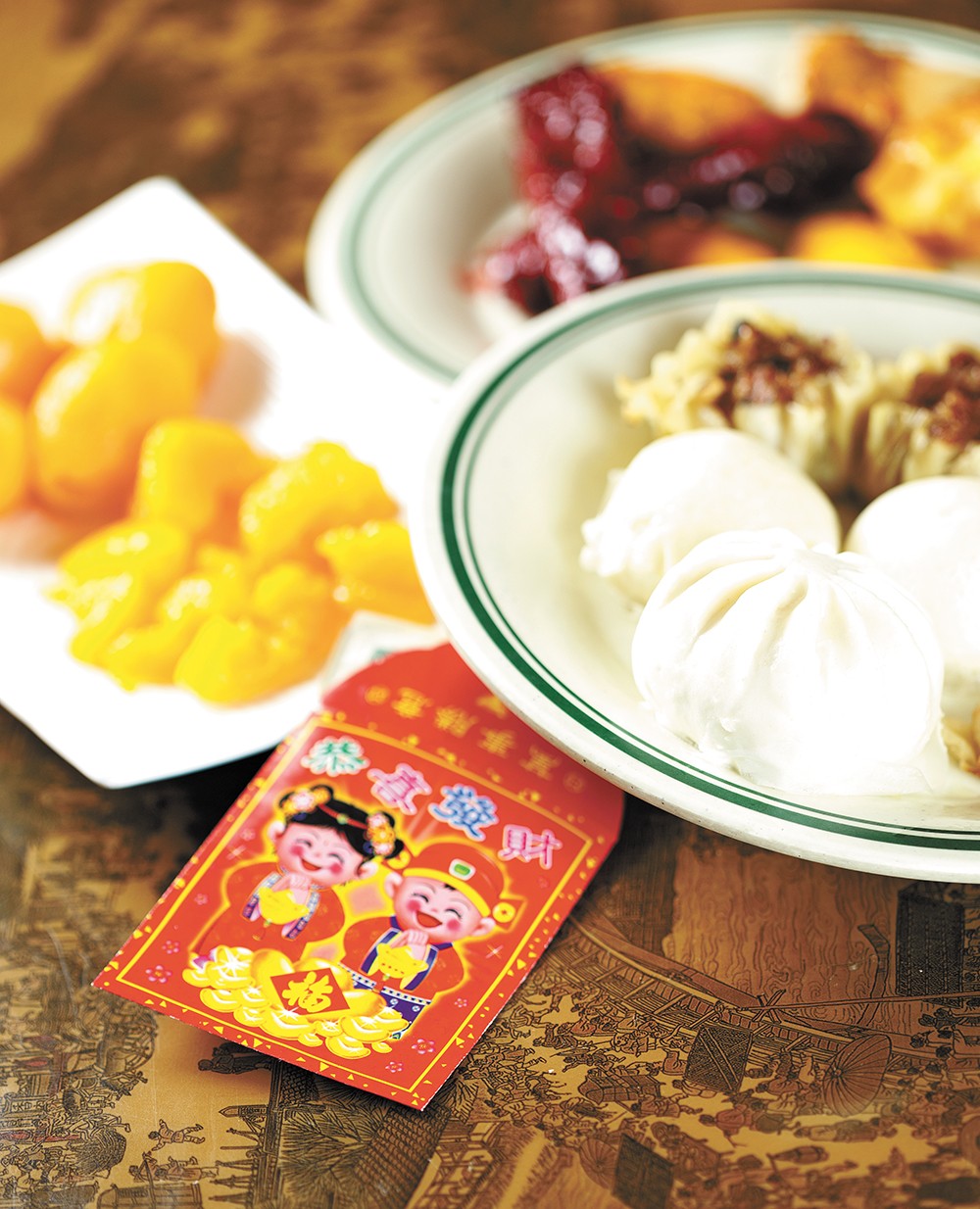 Young Kwak
Food from Canaan Buffet, along with the traditional envelopes used to gift money.

At some Chinese New Year company parties, a chicken is served with the head still attached. If it happens to be staring at your seat, it means you have been fired.

That's one tradition Ho Lan remembers hearing about when she was a child growing up in Taiwan. But other Chinese New Year food traditions aren't nearly as depressing as getting canned via a cooked chicken. In fact, several of the foods eaten during the month-long festivities are meant to give good luck.

Many families will put out tangerines because the Chinese word for tangerine sounds like "lucky," says Lan, who owns the Ho Ho Teriyaki Chicken restaurant in the Flour Mill with her husband, Danny Chang.

"They like to use the sounds," Lan says. "If you don't know you'll think it's just fruit, but it's meant to bring you luck."

The Chinese word for fish resembles a word meaning leftover or abundance. Dinner often ends with a whole fish being brought out, but you can't partake.

"If you are invited to a Chinese family [dinner] for New Year's, don't eat the fish," Lan says. At least not until the next day, because having just the bone left is not a good sign on New Year's Eve, she adds.

Song grew up in China and lived there until he was 26. He recalls celebrating Chinese New Year with his family in a tiny village. His father and brother lit up fireworks outside with the rest of the village, and as the sound of fireworks echoed until 5 am, his parents began cooking dumplings.

The dumplings — a staple for Chinese families — could be filled with pork and cabbage, egg and Chinese leek, beef and celery, or shrimp and fish. But the difference between an everyday dumpling and a New Year dumpling lies at the center.

A good New Year meal consisted of different meats: pork, beef, lamb and chicken, Song says. His family snacked on appetizers like boiled or fried peanuts and pickled vegetables before the main course, while the men drank 60-proof liquor at their table. Everyone donned new clothes and walked around to visit neighbors, who put out oranges, candies, sunflower seeds, cigarettes and liquor on their tables, Song says.

"Every family has their own different style," Song says. "Like here, some people eat ham, some people eat turkey during Christmas. In China, really it's up to your family's taste what you want to cook. Of course, our Chinese food is so diversified."

This year the Chinese New Year, the year of the horse, falls on Jan. 31, and the Spokane Chinese Association will host a celebration on Feb. 1. The festivities will feature a culture fair and stage performance. Afterward, people will be referred to Canaan Buffet, Hong Kong Buffet and Peking Palace for dinner, Song says. At Canaan, they plan to serve traditional Chinese New Year dishes, such as whole fish, for the celebration. ♦