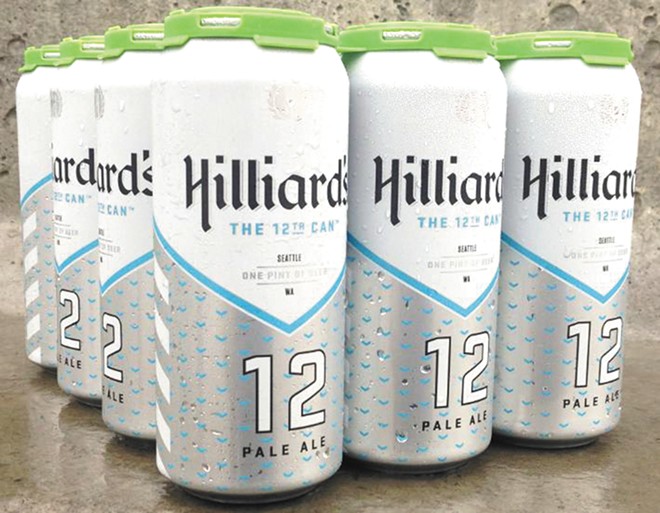 You are probably going to be watching the Super Bowl on Sunday because a team from the Northwest is playing in the game and you're boiling over with a sort of regional pride you've never felt before.

Suddenly, you are a Seahawk fan. That's perfectly fine. You're living within the Seahawk Nation and this is a group of fans that has been friendly to bandwagon hoppers. Shit, you even have a T-shirt! You're in! You're a 12.

And now you're going to an exclusively Seahawk-supporting Super Bowl party. Allow me to provide some pointers.

DO: Wear Seahawk colors or gear.

DON'T: Paint your face. No one will talk to you.

DO: Bring beer from Seattle. Rainier is no longer made in Seattle, but the nostalgia factor is high. But I recommend bringing the 12th Can from Hilliard's Beer in Seattle. I started drinking it sometime after halftime of that NFC Championship, so it passes the superstition test.

DON'T: Bring flippin' Coors or Coors Light. First off, it's awful, horrid stuff. Secondly, it's basically the state beverage of Colorado and the sort of swill favored by Broncos fans. There is going to be a hardcore fan at this party that will point this out to you.

DO: Cheer for the Hawks. Go crazy. Everyone else will be doing that.

DON'T: Ask questions about the basics of football. There is a time for that in the preseason, or maybe when we're playing the Jaguars or something, but that ship has sailed. Just follow the lead of your fellow partygoers.

DO: Take the time to make a creative and tasty appetizer. Here's a couple ideas from this week's paper.

DON'T: Eat the Velveeta and chili dip that's on the table yet no one admits to having brought. That shit is basically plastic. You don't want to spend the fourth quarter in the bathroom. Yes, I know, that first bite is heaven — the rest is just sadness.

DO: Bring Skittles. As far as scientists can tell, this is the only food Marshawn Lynch has eaten for the past 20 years and is the source of his beastly running abilities. They even have Seahawk colored Skittles now! It is reported to be extremely hard to find.

DO: Watch the game. The entire game.

DON'T: Drunkenly admit you really only care about the commercials.

DO: Have an excellent time and remember that this is special. Be conscious that the hardcore fans are very serious about their team and some of them have been watching the Seahawks as long as they can remember. Some of them dressed up as Curt Warner (the running back, not the quarterback) for Halloween in 1988 and 1989 and had a dad who worked hard to be able to take them to a game every couple years and buy their kid a Starter jacket, which he wore on the playground for several years when the Seahawks were absolutely terrible. Realize that these fans, especially those who grew up in Seattle, have been continually disappointed by their sports teams and they want this Super Bowl win with a lust that they know probably isn't healthy, but damned if they're turning back now.

DON'T: Tell these people to calm down.