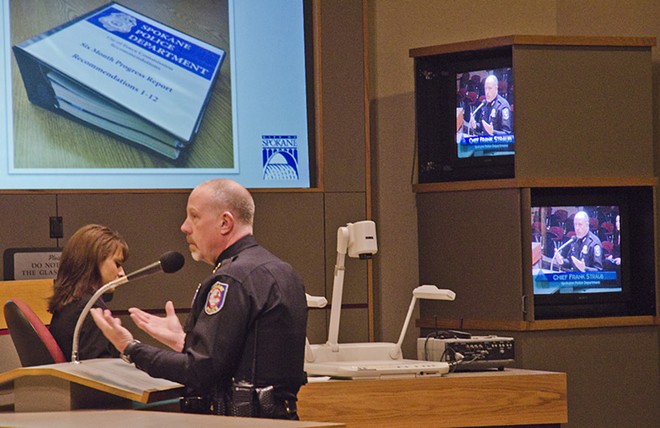 Standing before the city's Use of Force Commission on Thursday, Spokane Police Chief Frank Straub explains the department has embraced a whirlwind of changes in the 12 months since the commission issued 26 recommended reforms for SPD procedures and operations. Those changes have included command shake-ups, new enforcement strategies and increased training — some of which may have proven a little stressful or confusing for both the department and community.

Jacob Jones
Straub turns to the audience during Thursday's update on SPD reforms.

"In the first year, we had to sprint," Straub says. "[But] I'm very happy and satisfied with the direction that we're going in."

The commission, police leaders and city officials gathered Thursday for a follow-up hearing on the department's progress on the commission's reforms. Straubs offered a long list of changes, saying the department had either completed or started efforts on all 26 recommendations.

The five-member commission listened to two and a half hours of police and public testimony on the state of the SPD and plans for future reforms. Commission members offered praise for the apparent progress on training and civilian oversight through the Office of Police Ombudsman. Public comment included lingering frustrations over the new ombudsman model.

to the commission, outlining many of the reforms introduced in the past year. He also attached a checklist regarding progress on individual reforms listed in the commission's report. He also noted citywide crime rates had dropped nearly 14 percent compared to this time last year.

The chief highlighted several changes he considered significant, including:

• SPD has standardized batons and Taser models as recommended

• The department has cleared its backlog in public records requests, which now allows for a much quicker turnaround on new requests

Straub also notes the department has put in its order for officer-mounted body cameras, saying the cameras would start appearing on officers this fall. He also expected to hire an additional records keeper to handle video record requests. He plans to host a series of public forums this summer to familiarize citizens with the equipment and explain the department's policies on their use.

Police officials also say more than 90 percent of the department has successfully completed Crisis Intervention Team training on mental health de-escalation tactics and techniques, which we recently wrote about. Only a few new hires have yet to undergo the training.

During public comment, several speakers expressed frustration with the negotiated implementation of Proposition 1 and the new oversight framework at the Office of the Police Ombudsman. Tim Connor, with the Spokane Police Accountability and Reform Coalition, argues the new ombudsman procedures leave a significant "gap" between what will be done and what the commission recommended.

"It's one of the issues where the community could not have been clearer," he says. "I just feel sad and defeated by this outcome. … I feel this was a fraud."

Commission Chairman Earl "Marty" Martin asked Straub whether an ongoing review of the SPD by the U.S. Department of Justice would include an audit of department's culture. Straub responded with a list of things the department was doing to evaluate and improve its culture.

When Martin emphasized the DOJ did not seem to expect to conduct such an audit, Straub clarified the DOJ would help provide a recommendation for a consultant or approach for a cultural audit.

"We have absolutely no problem whatsoever with doing that," Straub says of an audit.

When asked if the SPD still suffers from an "us vs. them" mentality, Straub says he believes the department has turned a corner.

"We would not be here today talking about our successes … if we didn't have a highly motivated organization," Straub says. "Our officers have fully embraced the recommendations. … I believe that we are making significant progress."

An archive of all previous Use of Force Commission meetings can be found here.