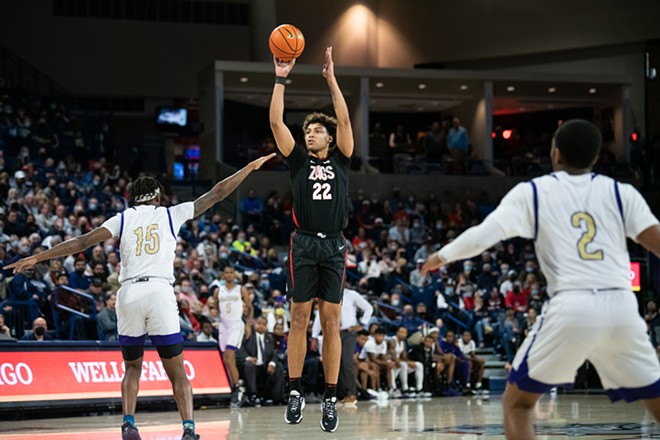 Gonzaga opened West Coast Conference play over the weekend and did so with a bang, putting their depth and talent in the frontcourt on full display.

On Saturday, the Zags blew out Pepperdine 117-83 inside The Kennel. Sure, it was the Zags’ 42nd consecutive win over the Waves, a winning streak that goes back to 2002, is the third-longest winning streak in college basketball history, and the longest winning streak that is currently active. Sure, the Waves are one of just two WCC teams with a losing record on the season, and the Zags are, well, the Zags. But, despite the lopsided matchup, the result should put the rest of the league on notice.

Those 117 points were the most scored by the Zags against a conference foe in the Mark Few era. The Zags scored those 117 points over the course of 90 possessions. According to statistician Ken Pomeroy, Saturday’s game featured the most possessions Gonzaga’s played in a non-overtime game since 2001-2002, which is as far back as his database goes.

The Zags opened conference play with their foot firmly on the gas pedal.

“We have a lot of guys who can put the ball in the hole, and we like to share,” Few said.


For the first time this season, six Zags reached double-figures in scoring, and the leader in that category came off the bench. Junior forward Anton Watson led the team with 19 points on seven of 12 shooting. It was the second season high in the past three games for Watson, who has been on an absolute tear over the past month or so. Watson is averaging 12.5 points, 6.2 rebounds and an impressive 1.2 fouls per game over the past six. Over the eight games prior to that, he was averaging just 3.6 points, 3.5 rebounds and 2.6 fouls per game.


“He’s finally asserting himself,” Few said of Watson after the game.

Watson’s emergence is welcome news for the Zags, though it has to be an incredibly terrifying sight for the rest of the West Coast Conference. Even without an assertive Watson, the Zags had arguably the best frontcourt in the country with Drew Timme and Chet Holmgren — who were only barely outdone by Watson against Pepperdine, as those two scored 18 points apiece. Now though, the Zags have a legitimate three-headed monster in the post. There will be no rest for weary big men when Timme or Holmgren head to the bench for a breather. Instead, they’ll have to deal with Watson, the most physical of the three.

Few mentioned the Zags’ surplus of scorers in his postgame press conference, but their bounty goes beyond just numbers. The Zags have a lot of guys who can score, and they can all do it in different ways. The diversity of skill sets in the Zags’ frontcourt has become in recent weeks perhaps the team’s most dangerous asset. Timme is an old-school, back to the basket big whose ballerina-like balance and footwork belies his strength. Holmgren is a more modern big, who can stretch the floor and connect from distance, but also the rare 7-footer who can put the ball on the floor and take it behind his back. Then there’s Watson, finally fully recovered from a pernicious shoulder injury suffered as a freshman and now able to embrace his bruising, physical style of play.

This wealth of talent in the frontcourt should come up huge once again in the Zags’ next game, against a BYU team that has given the Zags trouble, and the occasional loss, over the years.

The Cougars are 14-3 on the season and 2-0 in league play after picking up a quality win over Saint Mary’s over the weekend. They feature one of the best backcourts out west with super senior and skilled marksman Alex Barcello (16.6 points per game on 46.7 percent from three) and senior transfer Te’Jon Lucas (10.1 points per game and 4.1 assists per game). Their frontcourt, however, has followed the opposite trajectory as Gonzaga’s this season.

BYU lost starting center Richard Harward to injury in their final preseason exhibition, and he’s been held out since due to a cardiovascular issue. His replacement in the starting lineup, Gavin Baxter, made it just seven games before joining Harward on the injury report. Baxter tore his ACL in the seventh game of the season and is done for the year — it was a brutal turn of events for Baxter, who has now suffered three season-ending injuries over the four years he’s been at BYU.

On the flip side, their absences have forced freshman Fousseyni Traore (8.1 points and 7.8 rebounds per game) into the spotlight and he has proved worthy of its glow. The undersized but powerful big man is drawing reasonable comparisons to former Cougar Yoeli Childs, who often tormented Gonzaga during his career. That said, Traore is still a freshman, and he’s yet to face a collegiate test like he’ll get in The Kennel from Timme, Holmgren and the ascendant Watson.

No. 2 ranked Gonzaga hosts rival BYU on Thursday at 8 p.m., with the game being televised on ESPN2. The Zags then travel to Santa Clara for a Saturday matinee against a Broncos squad that has impressed so far this season. That game tips at 1 p.m. and will air locally on KHQ and around the region on ROOT Sports.