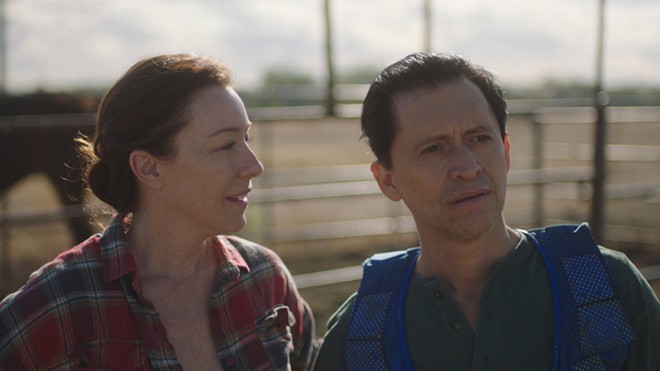 Clifton Collins Jr. is a quintessential character actor, spending the last 30 years appearing in supporting roles in everything from Walker, Texas Ranger to Star Trek to Terrence Malick's Knight of Cups. He's always a welcome presence, even if he's only on screen for a couple of minutes, and even if the overall project isn't very good. One thing Collins hasn't had much of a chance to do is play a lead role in a film, and he makes the most of the spotlight in the low-key indie drama Jockey. It turns out putting Collins on screen for nearly the entire running time is a good idea, too.

Collins plays Jackson Silva, an over-the-hill jockey working at a midlevel horse-racing track in Phoenix, Arizona. Jackson still commands respect from his fellow jockeys, but he struggles to make ends meet, and his decades of injuries have started to catch up with him. He's a familiar figure from plenty of movies about aging athletes trying to hold on to past glories, but Collins imbues him with a genuine sense of weariness and regret that transcends the stock character type. Jackson's closest friend and colleague is horse trainer Ruth Wilkes (Molly Parker), who's finally bought a racehorse of her own, a promising contender Jackson is eager to ride.

Collins and Parker have wonderfully lived-in chemistry, with an easygoing camaraderie that speaks to the long history between Jackson and Ruth, and their relationship is the best thing about the movie. But director and co-writer Clint Bentley seems more interested in Jackson's dynamic with Gabriel Boullait (Moises Arias), a young jockey who claims that he's Jackson's long-lost son. Bentley mostly avoids the inherent melodrama of the situation, but he needlessly draws out the question of Gabriel's parentage as Jackson starts spending more time with his maybe-son. As Jackson faces the potential end of his career, he hopes to pass on some of his knowledge to the next generation, and it's inevitable that placing so much faith in Gabriel will lead to disappointment.

Arias is too subdued a presence to make much of an impression, especially compared to the scenes between Collins and Parker, who carves out a distinctive character from what could have been a stock supporting role (a talent she and Collins have in common). Bentley also captures the horse-racing culture in an understated, naturalistic way, using real-life jockeys in background roles, including a fascinating support-group session in which they detail their many harrowing accidents and the resulting injuries.

Jockey doesn't build to the kind of redemptive showdown that defines most sports movies, instead settling into a meditative mood that can feel more anticlimactic than affecting. Bentley shoots substantial portions of the movie at magic hour, and while that allows cinematographer Adolpho Veloso the opportunity to deliver some evocative sun-dappled images, too often it just looks like the lighting department forgot to show up. In subverting expectations for a sports movie, Bentley pulls back a little too far, and Jockey's aimless narrative and murky imagery can make it feel obtuse and insubstantial.

But through it all, there's Collins, doing what he always does, making his character inviting and memorable, elevating the material when it's weak and working generously with all of his scene partners, whether veterans like Parker or non-actors who've never been in a movie before. For Jackson, what looks like a shot at the big time turns out to be his swan song, but for Collins, this overdue showcase deserves to be the start of a new beginning as a leading man. ♦