A new effort is underway to cut sodium consumption in Spokane, and it may be especially important for seniors 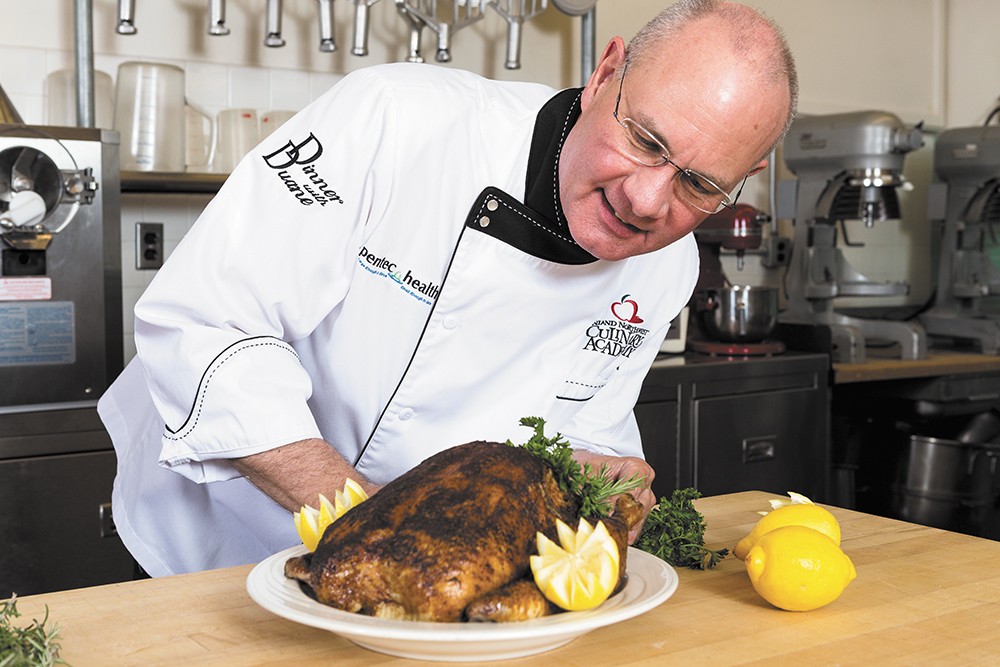 Stephen Schlange
Duane Sunwold is an instructor at the Inland Northwest Culinary Academy at SCC, where he helps new chefs learn to boost flavor without salt.

In that lunch-hour stop at a local sandwich shop, you may have accounted for a major portion of your daily sodium allowance.

Natalie Tauzin, a registered dietitian at the Spokane Regional Health District, breaks it down: 300 milligrams of salt in the bread, 600 for turkey, 300 for cheese, 100 in a dollop of mustard. Add a pickle for another 250 and chips for 200 more.

"You're leaving that meal with 1,600 milligrams of sodium and you thought you made a really healthy choice," Tauzin says. And that's just lunch.

With hypertension affecting more than 30 percent of adults in the United States, sodium reduction is becoming a major front in the fight to improve Americans' health. Simply put, sodium makes the heart work harder, leaving it more susceptible to things like heart disease and stroke and contributing to high blood pressure, also called hypertension. ("Salt" and "sodium" often are used interchangeably because much of our sodium consumption comes from salt, though not all salts contain sodium.) So while exact sodium intake limits can be controversial, it's well accepted that reduction would be helpful for many adults.

The current recommended maximum daily intake for adults is 2,300 milligrams, but half of the U.S. population should actually be limiting themselves to 1,500 milligrams per day, according to the Centers for Disease Control. The lower intake is recommended for those who are 51 or older, African American or have high blood pressure, diabetes or chronic kidney disease. By CDC estimates, 90 percent of Americans are eating too much salt.

In our region, federal grant funding is allowing the Spokane Regional Health District to work with local restaurants to cut down on the salt they're selling, with hopes of making customers across the region healthier. Currently, the focus is on pizza restaurants, whether "in name or primary focus," says Tauzin, who's leading the project. Nearly all the ingredients on your favorite pizza may be high-sodium culprits: the dough, the sauce, the cheese, the meat. Tauzin and others working on the grant are starting with the sauce, often made from juicy canned tomatoes that may also be bathed in extra salt to keep them plump. They're analyzing the nutritional characteristics of the menu items at four local pizza restaurants and other groups, like Providence and Gonzaga's dining service. A chef will then work with kitchen staff to help cut salt without losing flavor. The group also is working with local food distributors, encouraging them to carry lower-sodium prepared foods like salad dressings or those tomatoes used for pizza sauces.

"A lot of times [the label] 'healthy' is met with reservation, like, 'What do you mean? Is there any flavor?" Tauzin says. But the flavor of lower sodium recipes may actually be just as appealing if customers don't overthink it. A survey by the National Cancer Institute, a division of the National Institutes of Health, offered participants seven different dishes, each in an original version and a reduced-sodium version, without telling them which was which. For all but one dish — a salad with the feta cheese removed to cut salt — participants said they were as likely or even more likely to buy the reduced-sodium option as the original one.

Salt reduction may not

really need to be a specialized effort, but just part of the healthy, balanced diet toward which we should all be striving. Cutting down on processed foods and focusing on getting potassium-rich whole fruits and vegetables into meals is key (potassium helps offset the effects of salt, according to the American Heart Association). That can be especially difficult for people as they age, say food providers at local retirement communities.

"Quality of life is a big aspect, at least for the senior population," says April Ross, a registered diet technician at Rockwood Retirement Communities. Sodium reduction has to be balanced with caution against imposing too many dietary restrictions that can discourage people from eating enough to get their required nutrients, Ross says. That can be especially important among seniors, who may already struggle to eat enough because of reduced appetites or social factors.

"A lot of these folks are alone. They're eating alone, shopping alone, cooking alone," says Sue Nott, director of food and nutrition services at Touchmark Retirement Community. "That can really affect somebody's appetite, so it does become more challenging."

Ross and Nott both say moderation is key. It's not practical to ask people to give up all the food they like, even if those things are sources of excess fat and salt. Instead, they encourage people to eat some nutritionally dense foods — things like berries, greens or eggs — before filling up on less healthy options.

"What it boils down to is eating a variety of foods," Nott says.

"I would never deny them ice cream or bacon or the things they want. I just try to encourage them: 'Have some fruit with that' or 'Look at this beautiful salad we have today.'" ♦

For cooking at home, Duane Sunwold suggests looking for salt-free spice blends and using acids like fruit vinegars and lemon or pineapple juice to help flavor meals. Here, he shares a salt-free herb blend and a technique for using it to prepare chicken.

1 recipe of Herb Blend for Chicken

2 whole lemons, juiced; save the lemons

Remove the neck and giblets from chicken, rinse the chicken and pat dry. Sprinkle half of the spice blend into the cavity of the chicken; also put the parsley stems and whole lemons inside the chicken. Pour lemon juice over the chicken and sprinkle with the rest of the herb blend. Roast the chicken in a preheated, 350-degree oven for 1 to 1½ hours or until the chicken reaches an internal temperature of 165 degrees; remove from the oven, cover with foil and let rest for 10 minutes before serving.