With the need for foster care families increasing, local churches find a calling 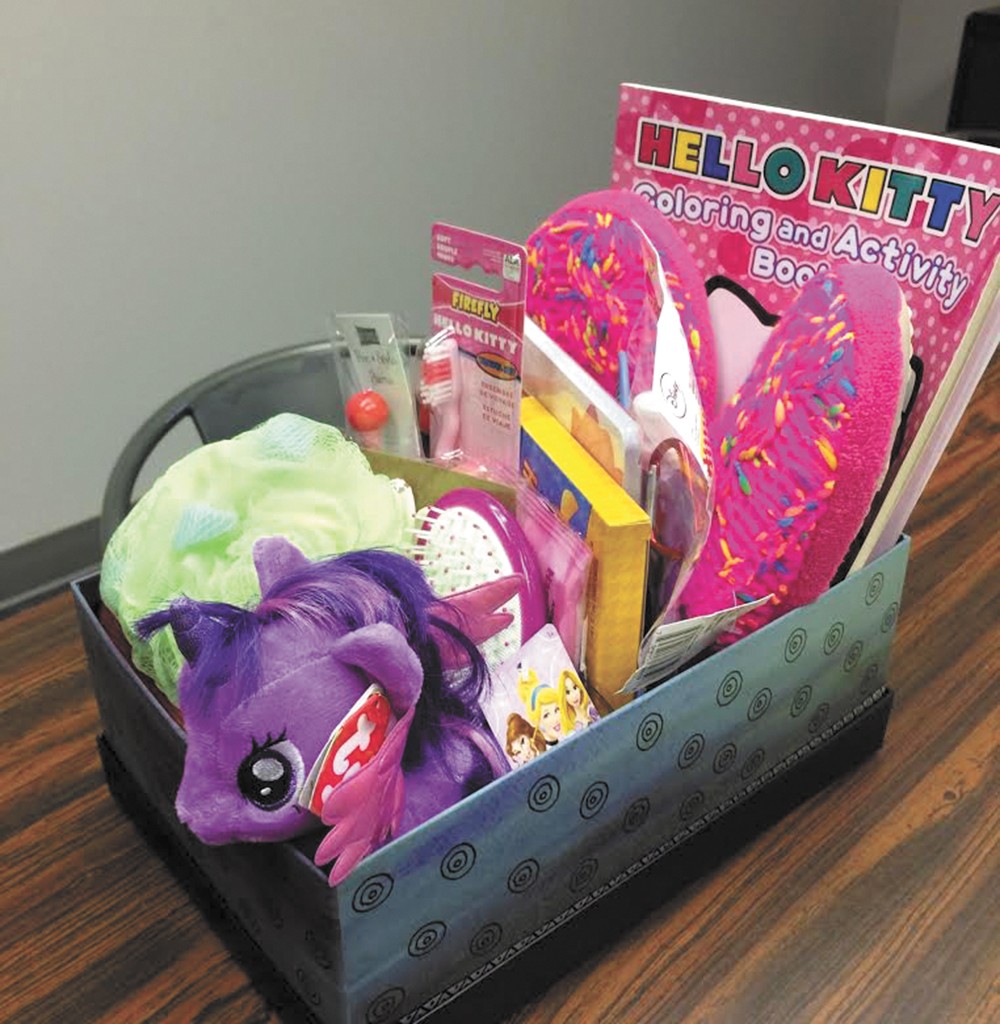 One of 250 "welcome baskets," prepared by a member of Real Life Ministries' congregation, will go to a girl ages 5 to 9 entering the foster care system.

The box in front of Richie Shaw,

pastor at Real Ministries' North Spokane location, overflows with plenty of things a little girl would love: There's a big, purple Twilight Sparkle My Little Pony plushie, a Hello Kitty toothbrush and a Hello Kitty coloring book. There are notebooks and a pink hairbrush. There are animal crackers and a can of pudding. And there is a note, a personal message from someone the recipient has never met, telling her that the Spokane community hasn't forgotten her in this difficult time.

Eventually, a young girl will receive the package on one of the hardest days of her life at the Spokane Department of Social and Health Services office, as a social worker searches for a foster home for her.

"It won't have any religious language," Shaw says. "We just want them to know people care about them. We have a heart for no-strings-attached generosity."

After a series of sermons about the Christian responsibility to care for the "widows and orphans" last month, Real Ministries' congregation has gathered about 250 of these "welcome boxes."

"We're going to start to nurture a heart for the foster family," Shaw says. "There have been people emailing, calling constantly, asking, 'How can we help?' One family gave close to $2,000."

Other Spokane congregations, like the Life Center megachurch in west Spokane and Summit Church on the South Hill, are doing the same thing. They're part of the alliance working with a relatively new group called Embrace Washington. (First Presbyterian in Downtown Spokane, New Creation Fellowship in the Mead area, and a small home church called River of Hope are in the beginning stages of joining.)

Founded by state Rep. Kevin Parker, Embrace Washington aims to help both kids in the child welfare system and beleaguered social workers. Eventually, the goal is far more ambitious than simply gift boxes for foster kids: They want to begin the slow, hard task of turning parishioners into foster parents.

the national economy is improving, but that doesn't seem to have stopped the rise in kids in foster care.

"Our overall need to be able to serve children has increased," says Connie Lambert-Eckel, regional administrator for DSHS' Children's Administration in Eastern Washington. Despite efforts to work with families to avoid out-of-home placement, the average number of children in foster care in Spokane has climbed from 713 per month to 873 over the course of the past four years.

It's a need felt at places like the Salvation Army's Sally's House, often the first stop for children while they're waiting for foster home placements. The past two years, says Sheila Geraghty, business administrator with the Salvation Army, the average length of stay at Sally's House has doubled. In 2013, many children had to wait more than two months before they were placed in a foster home.

"I think the need is great for people to step forward," Lambert-Eckel says.

but his story starts two decades ago, when he was a Young Life leader at Whitworth College, mentoring a fresh-faced, blond-haired Northwood Middle School student named Ben Sand.

Sand grew up, moved to Portland, and eventually became CEO of the Portland Leadership Foundation. In May of 2013, that group launched Embrace Oregon, focusing on corralling area churches to lead the charge to bolster the child welfare system. Sand has met with pastors, telling them they should be outraged that there are kids living in unhealthy situations, encouraging them to mobilize their congregations.

"The church and the faith community has done a really good job of addressing cosmetic stuff," Sand says. "But it hasn't done a good job at doing systemic work, to work toward solving complex social issues."

In Portland, 75 churches joined the coalition. They've put together 2,500 Welcome Boxes for children entering the foster care system and have raised $300,000, paying for the renovation of all nine of the Portland Department of Human Services offices.

But the big figure, prominent on their website and bandied about at board meetings, is "884." That's the number of foster families Sand needs to recruit to meet Portland's demand.

So when Embrace Oregon holds Foster Parent Night Out events, the purpose isn't just to give foster parents a break and show foster kids a fun time, it's also to give church volunteers a chance to meet the sort of kids they'd help if they became foster parents.

Recruitment has been slow. "It oftentimes will take up to two years for a family to make a decision to become foster parents," Sand says. But 53 new foster families have already been certified, and an additional 27 are on their way.

Parker, inspired by Sand's work and his own conversations with former foster youth, loosely launched Embrace Washington last fall. It started modestly, throwing a Christmas party for local social workers, but eventually Parker wants to recruit up to 45 area churches. So far, not a single one has said no.

"Our goal is to raise up about 10 foster parents a year. That's a pretty aggressive goal," Parker says. "Not everyone's going to feel a desire to become a foster parent, because it will turn their life upside down."

But there are other ways to get involved with Embrace Washington: An interested person could, for example, become an "office mom or dad," someone to hang out with the kids during long wait times at the DSHS office.

for people so they can get their toe in the water," Parker says.

Since 2012, the state has contracted with a national agency called Olive Crest to help with recruitment through its Fostering Together program. It has a goal of meeting with one church a month to discuss foster parent recruitment, and Embrace Washington has helped. Embrace Washington stokes interest, and Fostering Together answers detailed questions from potential foster parents.

"We call them community partners," says Amber Sherman, the Fostering Together coordinator for the Eastern Washington region. "The key is to partner together, rather than everybody doing their own thing."

As a partnership of church and state, there are, of course, limitations: The state doesn't contribute any money to Embrace Washington. And while local social workers are involved with Embrace Washington, they volunteer on their own time. But, the signs are encouraging: 17 more families in the region have become foster parents since April.