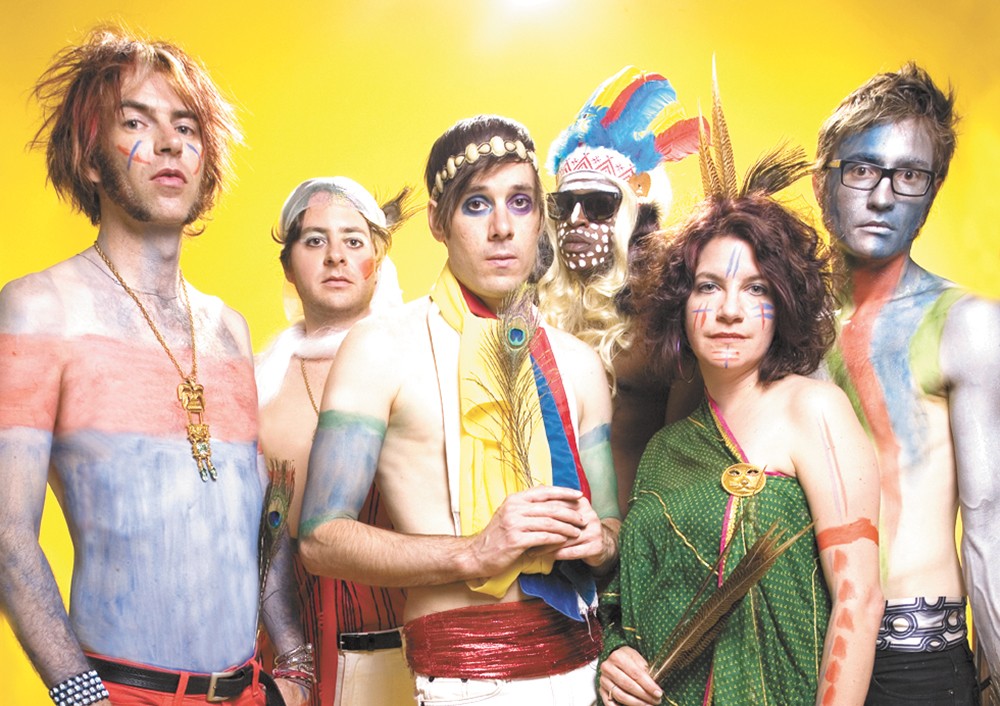 . This one, a female he'll call Falconvein.

It's a recent Saturday and Kevin Barnes is wandering around Columbia, Missouri, perusing vintage stores for a new outfit to wear at Of Montreal's show later that night. He goes straight for the women's clothing section.

"Women's clothes are just so much better than men's," the lead singer/songwriter explains over the phone. "There was a heyday in the '60s and '70s when normal people took chances in their fashion choices. Those are the clothes I'm interested in."

He says he's been too conservative on stage recently; he wants to glam it up a bit and get more in touch with his feminine side. He explains this new persona will probably be quite similar to his other grandiose glam-rocker personality, Georgie Fruit — described as a gender-bending black man in his 40s.

"When the Georgie Fruit thing happened I was on medication for depression," recalls Barnes, 40. "That was fun to explore that every night, inhabit that creature. It became so natural; it became absurd to think of it in those terms of another persona. He was just me."

Of Montreal's stage shows are essentially a circus act, full of rainbow confetti dots, fantastical costumes and psychedelic lights blurring everything together. The amount of performers who end up on stage is always a surprise but in the middle of all this wildness is Barnes, serving as musical ringmaster. He bounces and dances around, his voice at times tender, at other times raw. Even with so much happening around him, you can't take your eyes off of him.

Before each tour, Barnes selects the set list while his brother David works out the stage action. For their Saturday performance at the Knitting Factory, the group's first time playing in Spokane, Barnes says there will be about 12 people rolling in on their bus.

"In Taylor Swift terms, our group is small, but it's a big production for indies," he says. "This thing is all DIY and all self-financed. It's a labor of love, and we all do it for the fulfillment we get out of it. It's great to travel with your friends."

When he's not performing, Barnes says he's writing. "I have journals and journals full of lyrics," he says. "Most of it's crap."

But even if most of it is unusable to Barnes, he's still managed to put out an album almost every year since the band's inception in 1996 in Athens, Georgia, where he still lives. Through that time, Barnes' tunes have warped and transformed. The band's best-known song, "Wraith Pinned to the Mist and Other Games," from 2005's The Sunlandic Twins, features a distinct electronic pop vibe. Each subsequent album has fallen deeper into funky, psychedelic rock 'n' roll.

"I just get so bored so easily, it doesn't seem right to stay in one genre," Barnes explains. "I feel like abandoning the spirit of the old [record] as soon as each one is done."

Lousy With Sylvianbriar, recorded in San Francisco and inspired by the poetry of Sylvia Plath, was released last October, but the band already has another album in the bag, waiting for an early 2015 release date. The new LP, titled Aureate Gloom, is about the people in Barnes' personal life (he separated from his wife in December).

"This record is the most confessional that I've made in a while," admits Barnes, who says fans should expect at least one unreleased song at the upcoming Spokane gig. "It's not really scary to release this, but I'm talking about specific people and they haven't heard it yet. I'm not sure how they'll react."

That Of Montreal is constantly changing musical genres, stage personas and band members (20-some musicians have been in and out of the band) was caught on camera in the recent rock documentary The Past is a Grotesque Animal. Barnes has seen the film. He's not sure it's completely accurate, but he understands that filmmaker Jason Miller had to find a narrative.

"It's weird for me, it's hard to be objective," Barnes says. "The film is touching at times, I just don't like how it gets so dark, with me alienating people out of the band. The narrative is like, here's a man who has decided to make art above all else." ♦