Potholes and a Park

Why (most of) City Hall hopes you're ready to spend, even after years of cutbacks 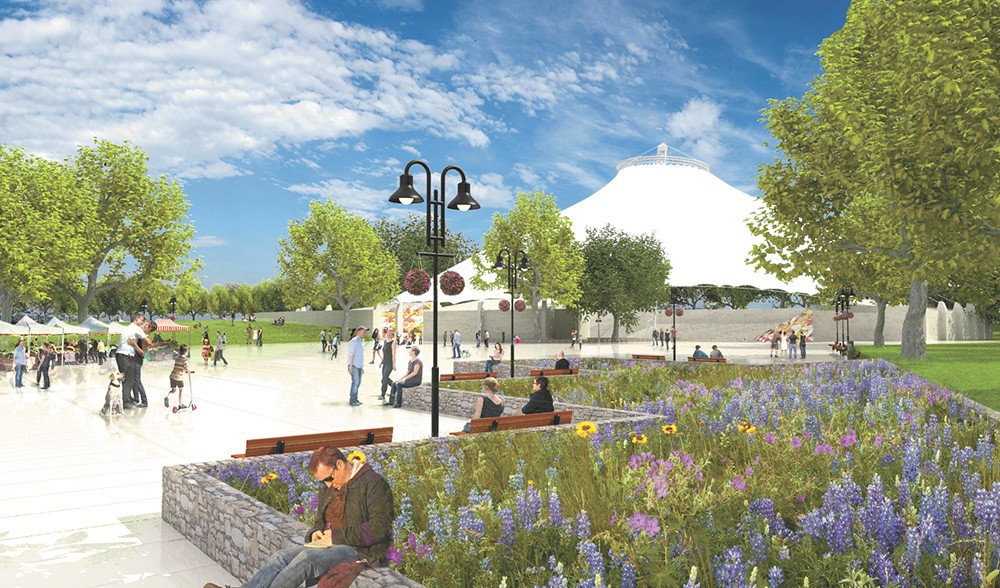 A rendering shows one potential look for a new "central plaza" around the U.S. Pavilion in Riverfront Park.

If the first half of Mayor David Condon's first term

has been defined by want, the coming years could be times of plenty. Following steep layoffs and reorganizations across City Hall in 2013, the mayor is now urging citizens to say "yes" to two significant spending measures.

On the ballot next month are a levy to fund street repairs and a bond to pay for a massive overhaul of Riverfront Park — both promising no increase in citizens' current property tax rates. By refinancing old debt, city leaders say they're able to get more out of the same amount of money.

"I hear a lot of [citizens] say, 'If it's what I'm paying now, OK.' When you start saying, 'Would you increase it?' they start stepping back from it," Condon says. "That's why I made that commitment. What could we do [with the same property tax rates citizens currently pay]? And it's a major number."

The two measures are separate — you'll be able to vote on them individually — but they're largely being marketed together. That's because the combined total expense of the two will cost the same rate property owners are currently paying: 91 cents per $1,000 of assessed value, with 57 cents going to repay a 2004 street bond and 34 cents toward repaying two park bonds. If the measures don't pass, citizens will see a decline in their property taxes once the old debt is paid off; if they are approved by voters, homeowners will continue paying their 91 cents toward old debt and new work.

Inside City Hall, staff are not allowed to advocate for the measures, but the electeds aren't holding back. Condon and six of the seven councilmembers support both the streets levy and the park bond. Councilman Mike Fagan, the lone defector, says he'll vote for the streets levy because it's a "primary function of government." But, to him, it's not the right time to spend on the park. He's worried about the other taxes citizens may be asked to pay over the next few years, including asks from the school district and Spokane Transit Authority and state efforts to follow a court mandate to improve K-12 education.

"The public doesn't know what I know, and the public needs to know what I know so they have an understanding of what it is they face," Fagan says. "The way government feeds people this stuff is just a little bit at a time to get over the next hurdle."

Back during Expo '74, Riverfront Park was the proof that Spokane had changed, that enough green space could begin to pave over memories of even the ugliest rail yards and worst environmental missteps. Now, that legacy — and just how quickly it's receding into our past — is driving an effort to remake the park in a major way.

In 2012, the city's parks department began the process of envisioning what a future Riverfront Park could look like. Since, with the help of a citizen advisory committee chaired by Inlander publisher Ted McGregor, the city has finalized a master plan outlining $100 million in proposed upgrades over the next two decades. In the short term, the plan envisions a park with fewer buildings, better marked pathways and a central events area around the iconic U.S. Pavilion.

That's the work that would be funded by the $60 million bond on the ballot — enough for citizens to see change but not enough to raise tax rates. In the proposal are big, sure-to-happen changes, like doing away with the IMAX Theatre. But many of the details are still up for debate, including the designs for any new buildings in the park (like the home of the Looff Carousel).

"One of the misnomers right now is that the designs are set in stone," says Juliet Sinisterra, the plan's project manager. "The master plan is a guide."

Where the park bond is paired with a specific long-term plan for upgrades, the streets levy is more flexible. While paying off old debt, the city will use $5 million a year from the levy for new projects, mostly focused on arterials, freeing up other city money currently used on arterials to pay for residential streets.

The first two years of projects have already been identified, and a citizen subcommittee of the Plan Commission will help choose future projects with an eye toward those that are ripe for federal and state dollars or are in areas that also need utilities improvements, like new water mains under the street.

When the outstanding debt is paid off in 20 years, the city will be free of the borrow-repay-borrow cycle it has always used to fund streets work. Instead, it will be left with a "pay-as-you-go" model, directing levy dollars to projects in real time.

"It makes much more sense," says Rick Romero, the director of the city's utility department who is credited with conceiving of the levy and bond financing plans. "It's going to be there every year and it's going to continue." ♦