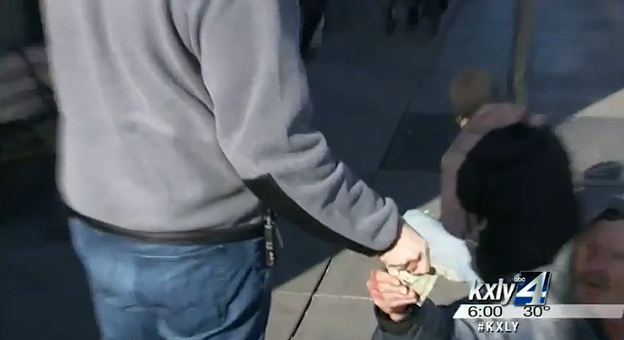 KXLY
John Doe gives a stack of cash to a man on the sidewalk.
UPDATE: "John Doe," whose name is Edward Carmen Jarzabek, is a convicted felon who was recently released from Idaho prison and is on parole for grand theft, KXLY reports.  His most recent criminal charges stem from writing bad checks from closed accounts.

"There’s people dying on the streets, so who cares if five years ago I had some financial problems? I’m being scrutinized because I'm a felon," Jarzabek told the Inlander over the phone this afternoon. “I’m not running for political office. I’m handing out money. Who cares? I don’t understand what the big deal is. ...I’ve made mistakes in my past, but everyone makes mistakes."

Jarzabek, who was released from prison in July and is permitted to live in Washington, says the money he's giving to the homeless isn't connected to his criminal activity.

EARLIER STORY: On Monday night, KXLY aired a story about a local "John Doe" who has spent the last couple of days roaming downtown in a gray North Face jacket and handing out stacks of cash to the homeless men and women on the streets. So far, Doe says he's given away more than $2,000, and he's planning on giving away tens of thousands more between now and Christmas.

Of course, not everyone appreciates Doe's generosity. Mark Richard, president of the Downtown Spokane Partnership — which, along with the city of Spokane, launched the "Give Real Change" campaign in August to discourage people from giving to panhandlers — shared his disapproval with KXLY.

"The experts tell us it's absolutely the wrong thing to do to those people if they are generally in need, is to give them cash," Richard said. "Sometimes, what you think is doing the right thing can actually have the reverse effect."

Doe says he made his money working in finance in Southern California before moving to Spokane about a month ago to live closer to his family. He says he immediately noticed Spokane's "massive homeless population" and wondered what he and others could do to help.

“There’s so many homeless people here and nobody does anything; it doesn’t make any sense" he said. "These guys are outside sleeping in the cold all night long and nobody cares or, I think, they don't know what to do. I’m just trying to make a point that it’s not that big of a deal. You can go and hand someone a coat or hand someone some money.”

Doe, who's tweeting about his effort here at @giveproject, spoke to the Inlander over the phone yesterday about his project, his critics and his hope to inspire others to give back, too.

"Basically what I want to do is generate some awareness," he said. "We're only here for a short time, I think. Society as a whole can't let people rot on the side of street."

INLANDER: How much money have you given away so far and how much money do you plan on donating between now and Christmas?

I do random things all over the day. I don’t really have an agenda.

Whoa! How are you able to afford to do this?

I’m just a normal person. I had a pretty good upbringing. I had some early successes. I made some money. I have rich friends. I have plenty for myself.

When you're giving your money away, where do you go? Who do you approach? What do you say?

What kind of reaction have you gotten from the people you've given to?

Nobody really gets excited. Most people are like, 'Wow, you’re recognizing me.' It’s more like a relief thing, like you’ve been stranded on an island and a boat finally shows up. Like maybe they can go to a restaurant now that they have some cash in their pocket and feel like a human being and not like a piece of shit.

How do you respond to the negative feedback from people who think you're just enabling bad habits?

A lot of the feedback we’ve gotten so far has been really good and I’ve really appreciated it. You’re always going to have people who are going to have their opinion.

We’re not in Hawaii. We’re not in Florida, and the temperature is 20 degrees outside. When you walk by someone on the street and they don’t have anything, and you don't give anything because you're worried they’re going to go buy drugs, that doesn't make sense because they’re going to die of hypothermia. ...The fact that you're willing to risk a human life over, ‘Maybe they're going go get high’ is so absurd if you break it down.

What's the deal with this scavenger hunt you've been tweeting about?

We’re going to give away things as an incentive for people to go and help people less fortunate than themselves. ...My whole goal is to get people interacting and helping other people. ...As soon as you start helping someone less fortunate, it actually makes you feel good. It’s an organic process. ...I think the habit will stick and the person will continue that habit for the rest of their life.

Those incentives, Doe says, includes hundreds of dollars in cash prizes and brand new iPhones for anyone who helps those in need. For every 10 people who tweet a photo or video to Doe that shows them helping the homeless — whether it's donating a few bucks or buying someone a hot meal or cup of coffee — Doe says he'll post a clue on Twitter to a place where he's hidden anywhere between $200 and $2,000 or an iPhone 6 Plus.  He says he'll post the first clue as soon as he gets 50 followers on Twitter.