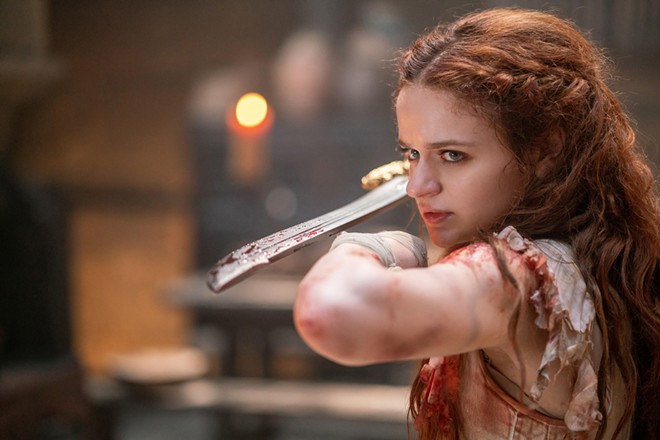 Certainly not a damsel in distress.

A series of action set pieces loosely held together by a self-aware fantasy story, The Princess doesn't reach the full heights of its premise, though it still proves to have plenty of fun along the way. It sees The Kissing Booth's Joey King portray the titular princess, her lack of a name serving as a clear sign that rich characterization is not the film's priority. This is all about action. Resembling a video game, there are a few conversational cutscenes and flashbacks, but really it's all about getting to the next battle. There are even distinct boss fights with rather ridiculous stunts, making it also feel like a wrestling match in the way it practically winks to the audience and never takes anything all that seriously as it throws itself from the top ropes.

King brings this to life all rather well, taking on a charming and committed sensibility that grounds the story in her fight for survival. Many of the projects in her career thus far haven't known entirely what to do with her. She has gone from being nominated for an Emmy in the series The Act one moment to somehow making three Kissing Booth movies that offered progressively diminishing returns. The Princess sees her taking on an action role for the first time, and — even with minimal characterization — really rising to the occasion.

The story is a reimagining of the classic fairy-tale trope where a princess is trapped in a tower in a castle. Only this time, the man she is meant to marry is Dominic Cooper's sociopath Lord Julius, who is very much the villain of this story and is looking to seize power for himself by taking over the kingdom. With no one coming to rescue her, the princess will have to take matters into her own hands, fight off an invading army of goons and rescue her family. Fighting alongside her is her friend and fellow master of the sword Linh, played with a fierce grace by Veronica Ngo (Star Wars: The Last Jedi) who steals every scene she gets.

The film smartly wastes no time in throwing us into the action though it does take a bit to fully find its footing. Early scenes can fall into being overly reliant on cuts, though it settles into a rhythm that allows for more fluid fights that are rather well-staged. One standout sequence sees King needing to battle swarms of enemies from all sides as she makes her way down winding stairs. While it does fall into the trap of having her foes often wait to attack one-by-one, the way the film doesn't pull any punches in seeing the blows land makes up for this.

While this is an R-rated film and packs a respectable amount of gore, it won't be anything that you haven't seen before in an action film. If anything, it could have benefitted from more inventiveness in its action. It would have done well to more fully embrace flashes of kinetic chaos, like the scene where our heroes literally throw the kitchen sink at their enemies. Seeing the princess and Linh have to think quickly on their feet by using what's around them is the film at its best. Other drawn-out, repetitive sword fights lack the same thrill and tension. While it clearly draws inspiration from films like The Raid series, it doesn't have the same imagination.

There are also some particularly clunky effects that make the danger to King's character feel less real, especially when she has to make a run along an outside wall after nearly being overwhelmed. When paired with an occasionally obtrusive soundtrack that seeks to make you feel excitement even when the scene doesn't earn it, the film often buckles under the weight of these flaws (cheap jokes don't help either). Still, it is able to power onward and find its way to the next fight sequence with enough vigor that it makes for a bloody good time where you are able to forgive its missteps. The Princess doesn't reinvent the wheel as much as it seems to think it does, though it crashes along with a speed and spectacle that's still worth getting swept up in. ♦