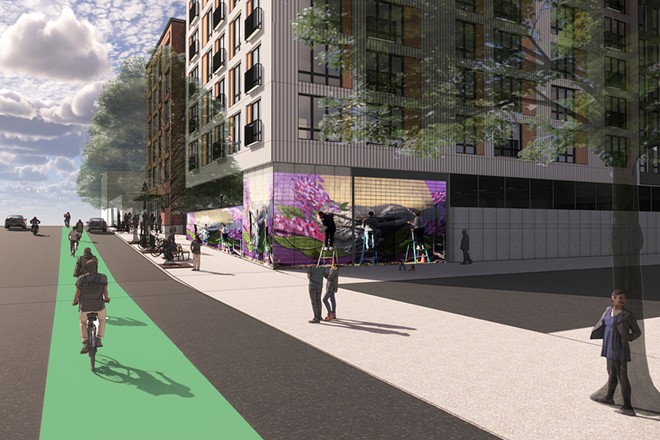 Spokane is adding a new building to its skyline — The Warren — a 139-unit multifamily residential apartment building in the heart of downtown at the corner of Riverside and Browne. Edlen & Co, along with deChase Miksis, are the developers of this exciting new project. They see their goal of rooting the building in the surrounding neighborhood with a strong connection to past, present and future residents. The Warren has engaged Terrain to create, cultivate and curate the space through a variety of unique artist collaborations.

One of these projects involves commissioning local writers from a variety of backgrounds, cultural identities and perspectives to write postcard narratives — short stories of historical fiction and nonfiction that draw connections between past, present and future inhabitants.

As a writer, I thoroughly enjoyed and was challenged by the opportunity to compose one of these postcard narratives. I struggled with the word count (a mere 300ish) and embodying a character that's distinct from myself yet with whom I share some crossover and universal similarities.

I hope you enjoy Nettie's story, and I hope you forge your own connections to the feelings it evokes and to the land, city and people it's meant to honor:

I wish I was writin' this whilst sipping piping hot tea, glancing out them fancy Pericord windahs, but things ain't THAT different "out west." Same fools sewing discord and division back home exist here too. Truth be told, at times I'm tickled by their mighty ignorance. As a midwife, who's brought damn near 1000 souls of every hue into this world, I know that we enter and exit alike.

I stay due west of downtown. Sure is nice to escape the noise and those causing it. Greedy desperate speculators trying to grab and gussy up land that ain't theirs and that's already gorgeous. The constant churn of expansion and extraction kicks up endless dirt, grit and dust. Those heathens are far too close to the crystalline river that flows right through this city. Spokane — the immemorial inhabitants tell me it means "Children of the sun," and Will, I mean to tell ya that name is as beautiful as it is apt.

Summer days stretch out long enough to make the night almost useless, since morning arrives smack dab in the dead of it. Deep gray slivers dominate the sky. Slowly, in the east, the sun rises in blazing auburn, orange, and crimson, spilling over dried grasses. Around mid-day, the heavens become an electric blue expanse, dappled with white puffs jutting up against jagged evergreen horizons. Evenings are near perfect. "The golden hour" hazily blankets us in warm molten copper that coats the hillside and houses overlooking the bluff. I swear, the sight is enough to stun anyone into some sacred kinda silence. And every now and again, we're treated to a deliciously sweet sherbet swirled finale.

When the day finally fades into inky darkness, I stop and think of you and the stories you once told me about them stars that come out just to twinkle. Then, I take solace in the knowledge that at least for a while, we shared the same sky.