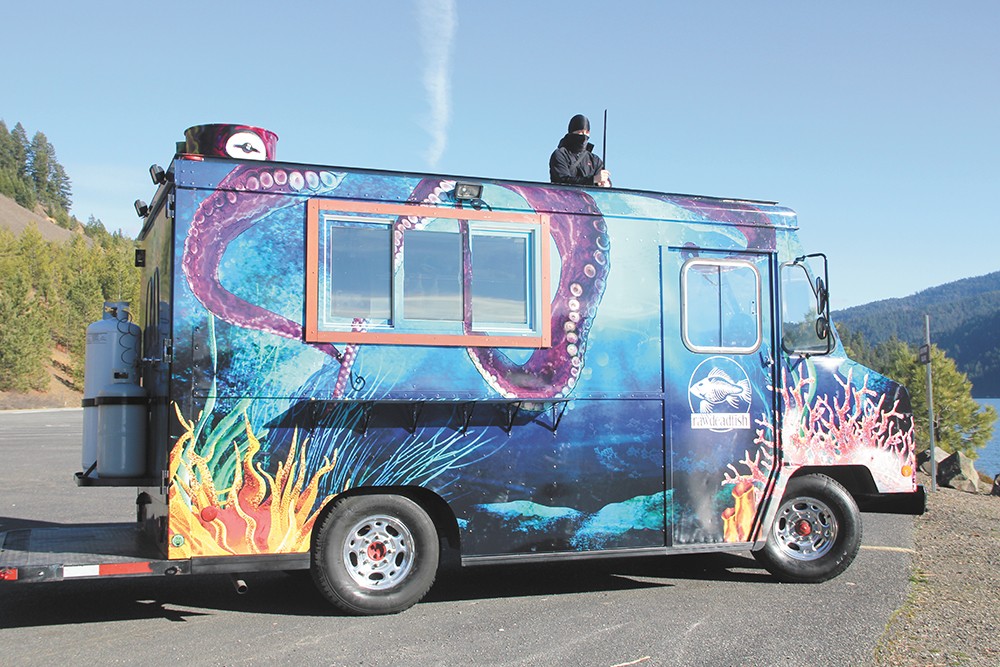 The RawDeadFish truck in all its glory. Sushi ninja not included.

As much as Travis Whiteside likes to joke around

— he thought it'd be funny to open his new mobile sushi business called RawDeadFish on April Fool's Day and serve burgers — he's serious about the sushi truck that was decades in the making.

A 1996 Lake City High School graduate, Whiteside made the circuit of Coeur d'Alene restaurants as a teenager, washing dishes before landing at Takara Japanese Cuisine & Sushi in 1997. He pestered Takara's Ryuhei Tanaka to give him a shot as sushi chef, apprenticing for 11 years there.

In 2005, Whiteside left to help open Bonsai Bistro, eventually working at several other establishments, including Fisherman's Market, before returning to Bonsai.

That's when Whiteside's wheels really started turning. He purchased the truck in 2014. With his father Ray's help, Whiteside added a freezer, generator, refrigerator and five sinks.

Besides traditional rolls like hamachi or wallu ($5), Whiteside serves up signature rolls derived from his 16 years as sushi chef, like his Caterpillar roll with eel and cream cheese ($14). A sophisticated fryer inside the truck allows Whiteside to deep-fry the tempura shrimp inside the Dragon roll ($15) or fry the whole roll, such as the Godzilla ($6) with escolar and jalapeño.

Ironically, the fryer nearly put the brakes on Whiteside's plan to open what might be the region's first mobile sushi service. At his mother's urging, says Whiteside, he brought the truck — with its traffic-stopping underwater octopus paintings, brought to life by ArtCoLab artist Jeremy Deming — to an Inland Northwest Food Network presentation called "Financing Our Local Economy with Slow Money" by Financing our Foodshed author Carol Peppe Hewitt. In the audience was Doug Fagerness, North Idaho College's (retired) HeadStart director. Fagerness offered a loan to Whiteside on the spot, eventually upping the amount to $15,000, much of it earmarked for the necessary fire suppression system.

And with that, Whiteside and RawDeadFish were on a roll.♦