Ahern, 80, had filed to run for the seat being vacated by Councilman Mike Allen, but he’s changing course and will file paperwork on Monday to challenge Stuckart, who is seeking a second term as head of the city’s legislative body. He tells the Inlander that it made more sense to challenge Stuckart rather than risk splitting the conservative vote with LaVerne Biel for Allen’s seat. 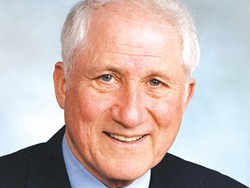 If elected, Ahern says he’ll focus on improving the business climate in Spokane, which he says is causing some companies to relocate to Spokane Valley or Idaho. He also says he’ll place a moratorium on the sale and production of marijuana. Additionally, Ahern will reverse the city’s so-called “Sanctuary City” ordinance, which prohibits city employee from inquiring about people’s immigration status, saying that it invites terrorists and foreign criminal elements into the city.

“The city council needs adult supervision and parental guidance,” says Ahern, who made an unsuccessful bid in 2013 for the council seat currently held by Councilman Jon Snyder.

Ahern doesn’t anticipate any problems working with the more left-leaning members of city council, citing his collaborative approach during his 10 years in the legislature.

“I tell you what, I’ve developed that ability over the years,” he says of being able to work with others. “I’ve been in sales and sales management all my life and you’ve got to get along with anybody and everybody. I don’t care how far away someone’s thinking is, you have to respect their views. This is America.”

Ahern has no fund-raising goals set at this point and says he’ll win the election through “good old-fashioned hard work.”

“I like a good election,” he says. “I love competition.”

Councilman Mike Fagan, the council's most conservative member, has also announced that he is running for reelection in District 1. He'll face off against Randy Ramos, a recruiter with the Spokane Tribal College.

The complete statement from Fagan is below. But it's a little hard to read, so here's the text:


Widely encouraged by the people of District 1, Spokane City Councilman Mike Fagan has been asked by democrats, republicans, independents – voters across the board- to retain his seat and run for re-election. It has been communicated clearly by the people that he is their voice. He listens to and responds to each and every citizen request. He is and has been present and approachable.

Fagan says, “Having served in the military and in Hillyard community leadership has provided me an excellent base for effective teamwork. I am humbled and honored to have been able to be the voice of the people’s wants, wishes and concerns.”

A citizen recently said, “Councilman Fagan is not even in my District but he didn’t hesitate to help me when I asked for assistance.”

“When elected by the citizens in the City of Spokane’s 1st District, I promised to represent the neighborhoods in my district, and serve the community as a whole. I kept that promise. With every decision I make and every vote I take in regards to the city, I keep all the citizens as my top priority. Their agenda is my agenda,” Fagan states.

Mike Fagan is proud of his District and of his work on the City Council. He says, “We have had successes and challenges, and I am very pleased with the progress we have made over the last three and a half years. We are providing opportunities for our city to flourish and thrive. I intend to continue to represent and advocate for the citizens. I am dedicated to the people and prosperity, not politics.”