The Gift is a mess of a psychological thriller 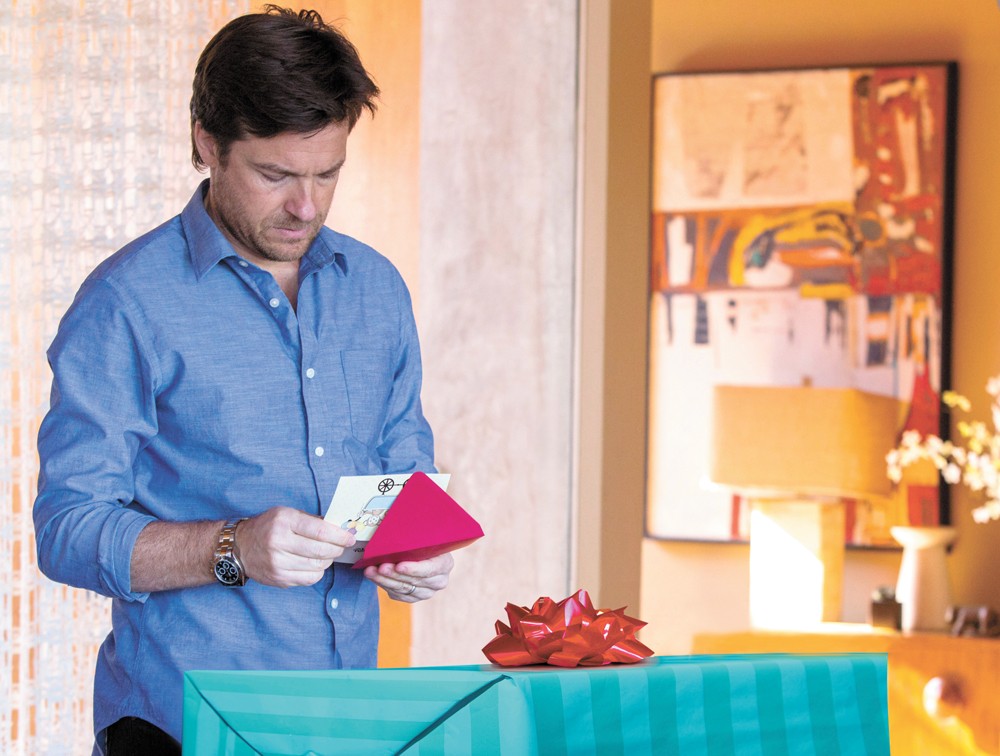 Jason Bateman has made a really big mistake.

he Gift is an infuriating movie on so many levels. It can't decide if it wants to be serious drama or a salacious thriller, so it's nowhere near enough of either, and each aspect seems to be laughing at the other. It touches on sensitive, tangled emotional matters that could easily be the basis for either sort of movie — how the effects of bullying in childhood linger into adulthood; how stress and grief can render us unable to function in daily life; how even the most intimate of relationships can be tinged by a lack of trust, and more — but fumbles all of them so badly that it contradicts itself constantly, as if it doesn't really understand the pain it is attempting to appropriate. It wants you to doubt who the villain is, but doesn't have the nerve to do anything meaningful with that gambit.

I'm trying not to spoil. Suffice to say that The Gift, after descending into emotional idiocy and insufficient intrigue, ends up in a disgusting place, one that presumes its audience will be horrified at the repulsive suggestion that a medieval notion about marriage has been contravened. Granted, this notion remains something that some real people in the real world still believe, and it's an awful trope that movies like this one frequently trot out. It's a trope that deserves to die, not be perpetuated.

I can't even say that The Gift — written, and in his feature debut, directed by actor Joel Edgerton — starts out promising. Almost from the get-go, we're led down a path that treats Robyn (Rebecca Hall) as an appropriate battleground for a war of wills between her husband Simon (Jason Bateman), and an old school friend of his, Gordo (Edgerton). (The movie is totally on board with the idea that women are properly pawns in games men play.)

The couple have just moved back to Los Angeles — to one of those masterpieces of mid-century architecture faced with huge glass windows, all the better for creepazoids to loom out of the darkness beyond into view — when they run into Gordo in a shop. Simon doesn't remember the guy at all, except that he was a bit of an oddball, which seems proven when Gordo shows up at the house without invitation several times, bearing increasingly and inappropriately extravagant gifts, and only when Robyn is home alone. Still, Robyn thinks that while Gordo may be a little socially awkward, he seems OK... but Simon in increasingly weirded out and wants to break off the new forced friendship.

There are several intriguing directions in which this basic scenario could have gone: The Gift ignores all of them and chooses one that has no ring of emotional truth at all... but which, I suspect, it thinks is incisive and subtly smart. Even though Simon was the one who didn't want anything to do with Gordo, and rather condescendingly informs others that it's only because Robyn is "too nice" that she struck up a friendship with the other man, Robyn is the one who gets cast in the role of the fragile irrational when she begins to see that Gordo might actually be pretty creepy after all.

But of course, she's delicate and unreasonable and probably not to be trusted! She lost a baby at some point prior to the beginning of the story, and went through a "rough patch." We're meant to wonder if Simon is now gaslighting his wife, trying to deflect, to prevent her from getting suspicious about his long-ago high-school relationship with Gordo. But it's the movie that's gaslighting Robyn, seemingly positioning her in the center of the story when what is meant to be the significant stuff is happening elsewhere.