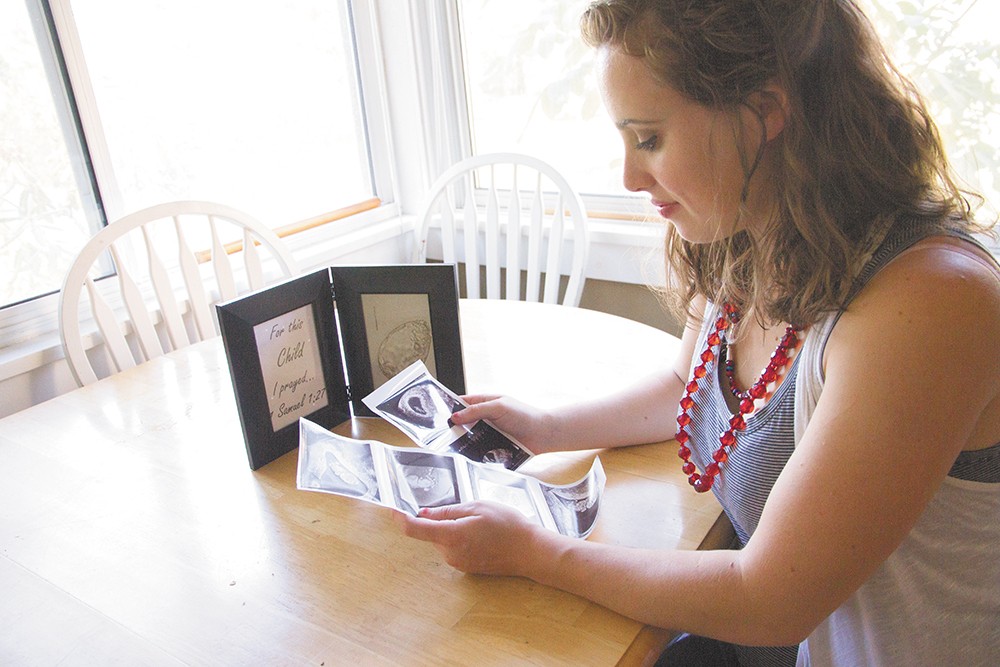 Jennifer Debarros photo
As she looks at sonograms, McNamara reflects on the process of getting pregnant.

, then comes a baby in a baby carriage. At least, that was the plan for Alicia McNamara and many others like her. But after two years of trying to get pregnant, McNamara and her husband decided they needed help.

So, McNamara, 24, went to Seattle Reproductive Medicine's Spokane clinic, which opened in Spokane Valley in late 2013. "I was really, really nervous," she says. "You're admitting something is wrong and you don't know what you're going to find out."

McNamara isn't alone. Talking about infertility — which is medically defined as being unable to conceive after one year of unprotected sex — can be uncomfortable, but it's actually fairly prevalent. Somewhere around 10 percent of women of reproductive age are infertile, says Thomas Fisher, a fertility doctor at SRM Spokane.

"It's a lot more common than people realize," says Fisher. He gained firsthand experience with what infertility is like after he and his wife struggled to have children of their own, eventually doing so with the help of in-vitro fertilization, or IVF.

For a spontaneous pregnancy to occur, women need functioning ovaries, Fallopian tubes, a uterus and sperm. Medical conditions impacting any of these can contribute to infertility.

Polycystic ovarian syndrome, a hormonal imbalance that can result in erratic ovulation, is the most common cause of infertility related to the ovary. Diminished ovarian reserve, which occurs when the number of eggs is reduced for a variety of reasons, often due to the mother's age, also can play a role. 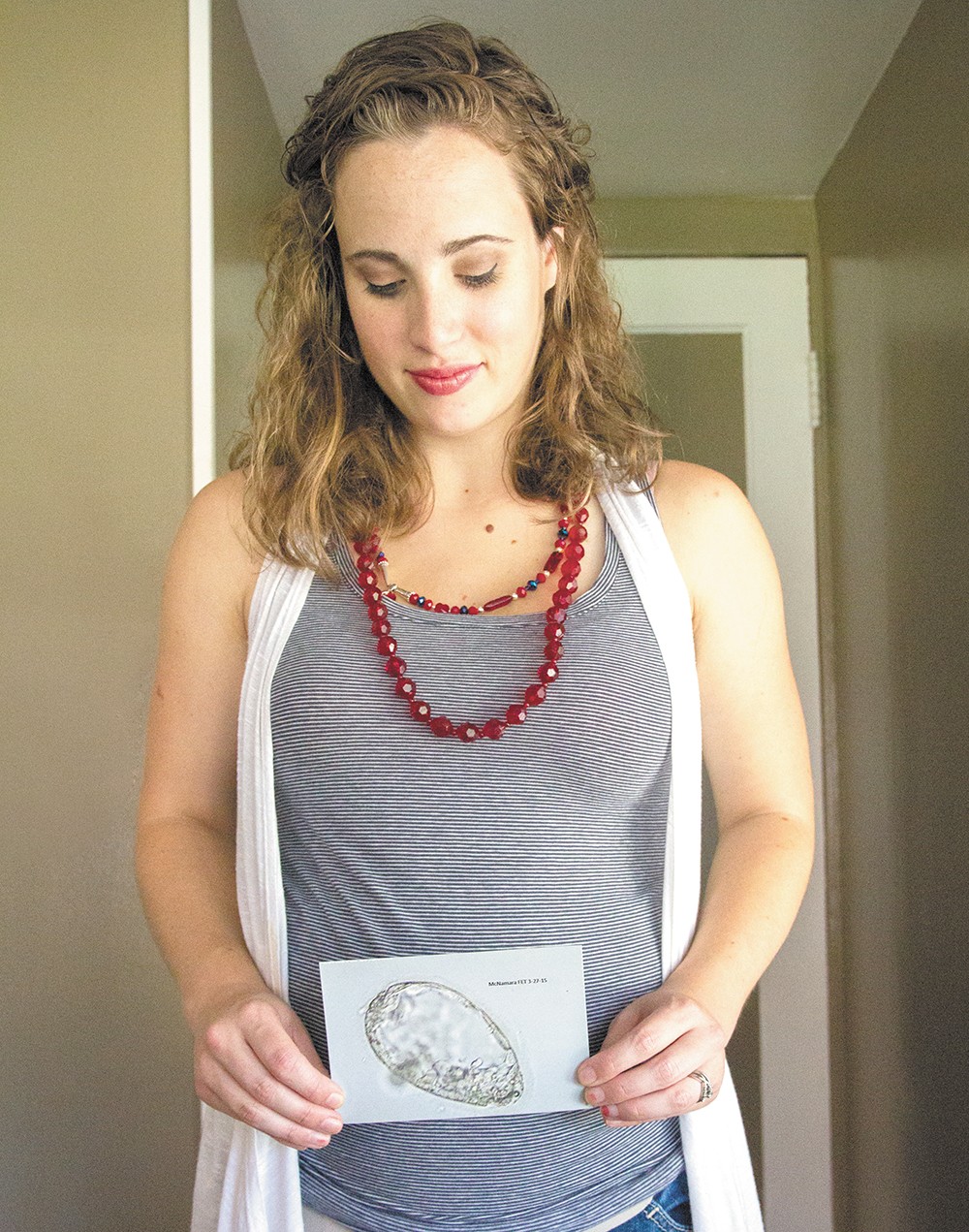 After an egg is released, it has to be captured and transported via the Fallopian tubes. Here, the most common risk factors for infertility are blockages that can be caused by a history of pelvic infection, gonorrhea or chlamydia, endometriosis or abdominal surgery.

Age, smoking, excessive alcohol use, extreme weight gain or loss, and excessive physical or emotional stress resulting in amenorrhea — an absence of menstrual periods — can also lead to female infertility.

It's not just a woman's problem, though. Male fertility is typically evaluated with a semen analysis, in which an andrologist examines the concentration, motility and morphology, or shape, of the sperm.

Medical conditions such as cystic fibrosis, trauma, and infection can cause male infertility, as can unhealthy habits such as heavy alcohol use, anabolic steroid use, testosterone injections and smoking. Often times, the reason for an abnormal semen analysis is unclear.

Frustratingly, for many patients, including McNamara and her husband, the cause of infertility remains unknown.

"We went in there and did all the tests," she said. "We basically had unexplained infertility."

The good news for couples struggling with infertility? There are numerous treatment options out there, and fertility clinics in Spokane are comparable to those in bigger cities such as Seattle or Portland.

Patients can take medications to stimulate ovulation, coupling those with timed intercourse to increase their chances of conceiving.

Often, couples initially try intrauterine insemination, or IUI, Fisher says, which is a form of artificial insemination bypassing the cervix, which can sometimes act as a barrier to the uterus.

IUI can be used in a variety of situations and is one of the more affordable options. That treatment alone, which costs less than $1,000, can be combined with oral and injectable medications to improve chances of success. The rate of success for IUI ranges from 5 percent to 20 percent, and risks with IUI are uncommon.

IVF is another conventional, but more complex, treatment. Medications are used to stimulate the ovaries to grow multiple follicles, and the eggs are then retrieved from the growing follicles. The eggs and sperm are placed together to allow for fertilization, and after developing in the embryology lab, the embryo or embryos are transferred into the uterus.

"We put the pieces together so they can potentially fertilize, but it's still a molecular interaction of the DNA from mom and dad," Fisher said.

Risks with IVF are rare, but can include infection, bleeding, injury to other abdominal tissues and side effects from hormonal medications.

"In general, people tolerate IVF very well," Fisher said. "Most of them are so grateful to be doing something, and working toward that pregnancy, that they have high tolerance of anything. We talk about all these risks with the patients, but it's quite rare that a person has an issue."

The first IVF baby was born in 1978 in England and in 1982 in the United States. "This field of medicine is really rather new," says Dr. Brenda Houmard, also of SRM Spokane.

Improved technology has led to better success rates, Houmard says. Most of that resulted from improved embryology culture conditions and different protocols for stimulating the ovaries. In addition, she says, the advent of a process called cryogenic vitrification has allowed patients to freeze their eggs and embryos.

"We couldn't really successfully freeze eggs prior to this technology, and it just recently has gone from experimental status to routine use," she says. "So that's exciting."

Other cutting-edge services currently available include pre-implantation genetic diagnosis, state-of-the-art science enabling the selection of embryos that do not possess specific genetic disorders or chromosomal abnormalities. Fertility preservation for men and women is an option for those experiencing a life-changing event such as cancer, or simply a lifestyle decision to delay parenthood.

Patients may also benefit from acupuncture and nutritional education.

McNamara became pregnant in March with the help of IVF and is expecting her first baby in December.

"Going in and taking that first step, and seeing the doctor, was the best thing that we did," she says.

Most experts agree that women younger than 35 should try to get pregnant for at least one year before seeking medical advice. Women 35 or older should see a health care provider after six months of trying.

When selecting a clinic or health care provider for infertility treatment, Fisher says, "I think that the most important thing is comfort." And if you can, talk to people you know to get referrals to a fertility specialist. Word of mouth can be a great way to go about choosing a clinic.

McNamara says her nurses and doctors offered compassionate and responsive care, something she says is crucial: "Personal touch is so, so important."

"They were always willing to help and answer my questions," she said. "Nothing seemed silly or stupid."

A new patient likely will undergo an array of diagnostic lab work, such as blood tests, and possibly an ultrasound. The fertility specialist might prescribe medication, and should talk to you about your test results, goals and finances, because many insurance companies do not cover reproductive services.

McNamara says the whole experience was worth it. "We definitely want more than one," McNamara says. "I'm one of four, he's one of three. If we can, I would absolutely go through the process again." ♦