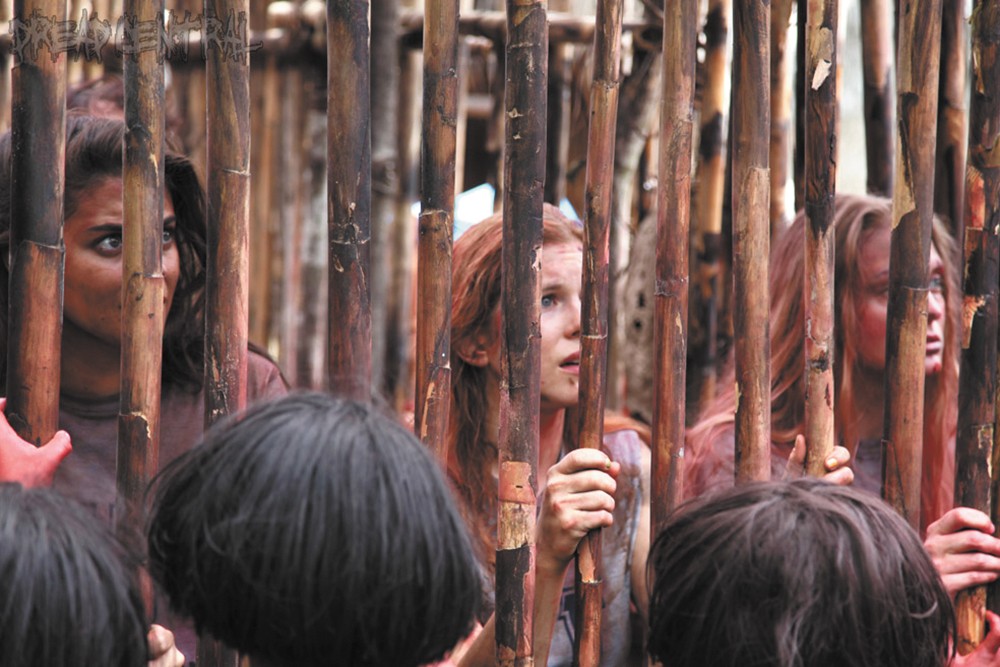 Trapped by a generic plot.

After making the festival rounds back in 2013,

Eli Roth's riff on the horror subgenre of tropical cannibal movies has finally arrived in theaters with less of a scream than a whimper.

It's not that the film's quasi-ironic take on privileged, white activist college students' farcical attempt to save a fertile slice of the Amazonian rain forest from loggers already feels hackneyed — that's part of the "fun" in gore-tastic horrors such as this and Ruggero Deodato's infamous Cannibal Holocaust (obviously a huge influence on Roth). Nor is it the fact that these do-gooders unsurprisingly end up captured and slaughtered by a local tribe that views any Anglo incursion to be better suited for disembowelment than displays of friendship.

The Green Inferno's problems lie more with its plot, which is generically routine. It is exactly what you think it is, and no more. Unlike Roth's best, most harrowing films (Cabin Fever, Hostel: Part II), which contain plenty of out-of-left-field shocks that double down on their already queasy story lines, The Green Inferno feels like a retread of a retread.

Levy (of Nicolás López's superior 2012 "Chilewood" effort Aftershock) is the head campus activist who leads an annoyingly naive but nonetheless enthusiastic crew of like-minded cannibal fodder to Peru where, following what feels like an extremely requisite plane crash, they are set upon almost immediately by the tribe. As the initially skeptical Justine, female lead Lorenza Izzo gives one of the film's only non-rote performances. Toward the end of the film, she's painted solid white in preparation for a dire cannibal ritual, which invariably leads to unwanted thoughts of Bo Derek's mud treatment in 1981's Tarzan, the Ape Man. Sheesh.

The Green Inferno does have a few good things going for it, however, chief among them the hellishly good (and, indeed, hallucinogenically green) cinematography of Antonio Quercia. Greg Nicotero and Howard Berger of KNB EFX don't stint on the gore, either. One ocular incident, in particular, will have audiences squirming long after they exit the theater. Despite those moments, the once unstoppable Roth seems to have entered into a career cul-de-sac with The Green Inferno (the marketing campaign has taken some serious negative hits on Twitter of late, too). Like its protagonists, the film's mix of gutsy — pun intended — enthusiasm and scripted naiveté feels just slightly off-key. ♦