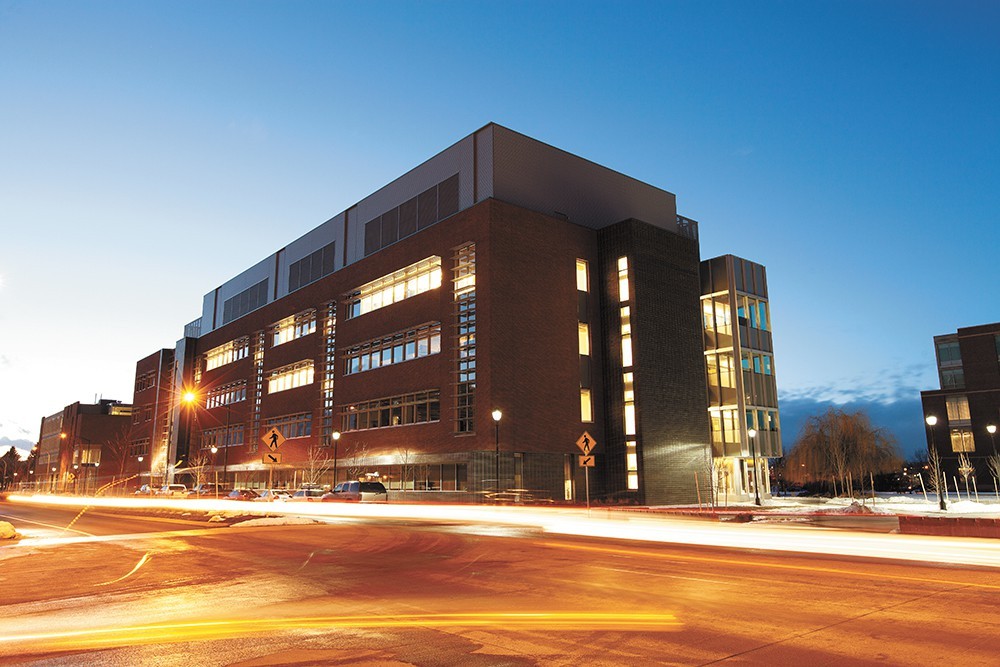 He set the university on a path: He lobbied for a medical school, uncovered gaps in research and economic development, stabilized relations with state lawmakers and fit in with any group, from industry leaders to students.

But all his ambitions and plans are in the hands of the next president — whoever that may be. A committee spent September through November pulling together opinions and insight from every corner of the state to determine what kind of leader people want. The conclusion was decisive: They imagine a president who will steer WSU toward the destiny Floyd designed.

"President Floyd will be a bit of a hard act to follow, as they say," says WSU Spokane Chancellor Lisa Brown of Floyd, who died at 59 of cancer in June.

The next president will face challenges from all sides. A growing student body and an expanding statewide system combine with changes in higher education that have been building over the last decade, making the executive's job more complex. Mike Worthy, a member of the Board of Regents who's leading the presidential search advisory committee, says those circumstances likely will draw the right person to the university.

They need someone who isn't easily intimidated.

After Floyd, people realize they need someone to be his or her own kind of leader, says John Gardner, CEO of the WSU Foundation, who came with Floyd from the University of Missouri in 2007.

"It'll have to be someone who has enough confidence that it doesn't seem threatening to follow someone like President Floyd — who can continue marching this university in their own way toward the same destination," says Gardner.

The 25-member search committee will start reviewing applicants soon. Working with the executive search firm Isaacson, Miller, the committee distributed a job description during Thanksgiving week. The group will narrow the applicant pool to three or four candidates who will meet the Board of Regents, which plans to make its final selection by the end of the spring semester.

While "visionary" is equally difficult to articulate on a résumé, Worthy says they'll look for someone with a proven record. The committee hopes to attract applicants already holding presidential posts at other colleges and universities, Worthy says. They've already identified some.

University presidents' roles make them more like CEOs than professors, but many people want their executive to come from academia. That includes a faction at WSU, Worthy says. But he was surprised to hear that most people are open to a different pedigree, if that candidate were the best choice.

"Some of our most senior and prestigious faculty members said it's not important that they come with a strong academic background," Worthy says. "One person said to me ... that in some instances academics are boring — and that's not to say a bad thing about academics, but it's a fact. We've got to find someone who has a certain amount of charisma so they can move us forward."

Gardner and Worthy believe they'll have no trouble attracting a new "big thinker." The university already proved it could when it hired Floyd. The regents also proved they will support an ambitious leader — and compensate handsomely. In 2014, Floyd's salary was $725,000, making him the fourth-highest-paid public university president in the nation.

Young Kwak
In June, Elson Floyd died of cancer at 59.

When the state legislature ordered reduced tuition for WSU this year but didn't take it out of allocations to the university's budget, it signaled a kind of change that public colleges and universities hope for across the country.

For 15 years, legislators slashed funding for higher education as other priorities took precedence, Worthy says. Schools made up for it by raising tuition, admitting more students and looking for private funding. In short, they started acting like private schools.

Gardner says state legislators justified cutting higher education because they saw college as a private good instead of a public one. But Floyd became more and more convinced throughout his career that this was wrong. While serving as president at the University of Missouri, Floyd unveiled the "fourth mission," Gardner says. Land-grant institutions, like Missouri and WSU, were founded to provide teaching, research and outreach. Floyd added economic development.

He brought that mission to Washington, where he convinced everyone of WSU's statewide potential. Gardner points to the concluded $1 billion campaign, which leveraged private funding for public initiatives, such as research and student access, and the medical school, conceived to address a need in the state.

"There are some who think WSU is just trying to expand its kingdom and scope beyond what it should," Gardner says. "What we do is find the most pressing problems in our economy ... and ensure that the university is doing everything it can to make lives better — to make the economy better — to make it a better place to live."

Already committed to this massive undertaking, Worthy says the next president will have to navigate the university's "growing pains."

After 25 years, its branch campuses in the Tri-Cities, Spokane and Vancouver have come into their own, but they'll need more attention as they add infrastructure and consider new programs.

Brown sees that growth as an ongoing redefinition of the system's purpose and priorities. The university needs a president who understands that and will deliver all the necessary support to make it happen.

"For WSU, it's ... appreciating the value of having this whole statewide system that you can draw upon for our different kinds of strengths and specialties. But it's obviously more complicated than one big campus," she says. "[The branches] were authorized by the legislature 25 years ago, but really there's a whole period of building and advancing and figuring out our mission."

That grand scope will draw the new president's eyes to big pictures and long-term planning, but he or she also will encounter expectations on a smaller scale. Ones that align more with tradition.

While students support WSU's aspirations, they have their own priorities — issues like tuition, mental health, sexual assault and accusations of an unwelcoming campus climate by underrepresented groups, says Samantha Kieling, vice president of the Associated Students of WSU.

President Floyd had a way of making himself available to students so they felt heard, she says. He attended ASWSU meetings every semester and sided with students over other administrators at least once when those administrators ignored complaints.

"Students want a president who is accessible to them and listens to them and [who maintains] the overall feel that [Floyd] had of being the students' president," Kieling says.

Pullman Mayor Glenn Johnson wants the new president to make more time for the city. He says the two executives worked well together, and Floyd acted when problems arose over the years. But his administration more than once made decisions without consulting city officials, and Floyd never attended a big annual function that was important to his predecessors.

"It'd be nice to have the next president pay a little bit more attention to the city. That wasn't on Elson's agenda," Johnson says. "Times have changed." ♦