ART ON THE GREEN: 2016 Hall of Fame Inductee 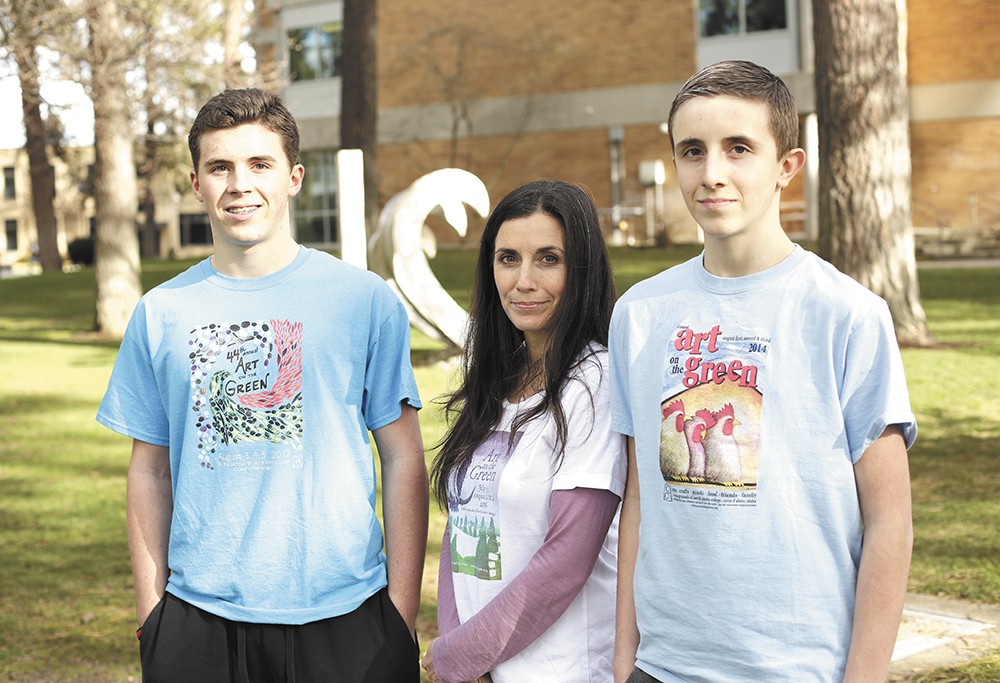 Young Kwak
Art on the Green Volunteer Coordinator Jolie Bazler and sons Will (left) and Schon.

writers have wondered what makes Art on the Green so popular with not just Inlander voters, but also the thousands who attend this annual, three-day Coeur d'Alene arts festival.

Is it the idyllic setting, meandering across North Idaho College's gentle, grassy terrain that even on the hottest August days benefit from shade trees and Lake Coeur d'Alene's cooling breezes?

Maybe it's the variety of artwork, an average of 170 booths overflowing with pottery, painting, photography, handmade clothing, sculpture, glassware, jewelry and crafts.

Could it be the proximity to two simultaneously occurring festivals, Taste of Coeur d'Alene at City Park and the eclectic Sherman Avenue street fair?

Carol Stacey, Art on the Green president, has her own opinions. With more than 40 years' experience with the nonprofit event, she would definitely know.

"I think that it's a volunteer thing," says Stacey, who thinks volunteers make it feel like a friendly, community get-together.

A big, friendly, community get-together. With only two part-time employees, Art on the Green marshals approximately 700 volunteers to help with setup and cleanup, food booths, promotion and numerous musical, theatrical and other performances held during the festival. Volunteers also help the juried art show and annual poster contest, which Stacey says equates to good quality artwork.

Stacey has seen the event evolve — Art on the Green originated in 1969 as the "Arts and Crafts Outdoor Festival" — and they're still making adjustments. "Way back in the early days," says Stacey, "the kids would sleep down there and guard the paintings." Now that task is hired out.

Last year, one of two musical and event stages finally got a real sound system, says Stacey, although the audience — especially little kids — are welcome to come right up to the stage and dance to their heart's content.

This year, the grounds are being reworked to improve traffic flow.

Good thing. One of Art on the Green's founding members, Sue Flammia (who sadly passed away last year), had estimated the crowds at around 35,000, says Stacey. We think Coeur d'Alene's beloved art festival and Hall of Fame winner is being modest; we're going with a previous Inlander writer's estimate of 50,000. Maybe more.